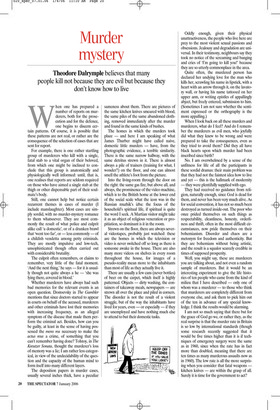 Theodore Dalrymple believes that many people kill not because they are evil but because they don’t know how to live When one has prepared a number of reports on murderers, both for the prosecution and for the defence, one begins to discern certain patterns. Of course, it is possible that these patterns are not real, or rather are the consequence of the selection of cases that are sent for report.

For example, there is one rather startling group of murderers who kill with a single, fatal stab to a vital organ of their beloved, from which one might be inclined to conclude that this group is anatomically and physiologically well informed: until, that is, one realises that reports are seldom required on those who have aimed a single stab at the thigh or other dispensable part of their soulmate’s body.

Still, one cannot help but notice certain recurrent themes in cases of murder (I include manslaughter). Most cases are simply sordid, with no murder-mystery romance to them whatsoever. They are most commonly the result of what police and culprit alike call ‘a domestic’, or of a drunken brawl that ‘went too far’, or — less commonly — of a childish vendetta among petty criminals. They are mostly impulsive and low-tech, unsophisticated though often carried out with considerable brutality.

The culprit often remembers, or claims to remember, very little of the fatal moment. ‘And the next thing,’ he says — for it is usually though not quite always a he — ‘she was lying there, covered in blood.’ Whether murderers have always had such bad memories for the relevant events is an open question. Dostoevsky in The Gambler mentions that since doctors started to appear in courts on behalf of the accused, murderers and other criminals have lost their memories with increasing frequency, as an alleged symptom of the disease that made them perform the criminal act. Besides, how can you be guilty, at least in the sense of having possessed the mens rea necessary to make the actus reus a crime, of something that you can’t remember having done? Tolstoy, in The Kreutzer Sonata, thought the murderer’s loss of memory was a lie; I am rather less categorical, in view of the undecidability of the question and the capacity of the human mind to form itself into many different layers.

The deposition papers in murder cases, usually several inches thick, have a peculiar sameness about them. There are pictures of the same kitchen knives smeared with blood, the same piles of the same abandoned clothing, removed immediately after the murder and found in the same kinds of bushes.

The homes in which the murders took place — and here I am speaking of what James Thurber might have called naive, domestic little murders — have, from the photographic evidence, a terrible similarity. There is the same narrow hallway, with the same detritus strewn in it. There is almost always a pile of trainers (training for what, I wonder?) on the floor, and one can almost smell the athlete’s foot from the picture.

Into the living-room through the door on the right: the same gas fire, but above all, and always, the prominence of the video machine, which is to the British home at the lower end of the social scale what the icon was in the Russian muzhik’s izba: the focus of the household’s spiritual life, if spiritual is quite the word I seek. A Martian visitor might take it as an object of religious veneration or propitiation, so dominant is it in the room.

Strewn on the floor, there are always several videotapes, probably just watched: these are the homes in which the television or video is never switched off so long as there is someone awake in the house. There are also many more videos on shelves in every room throughout the house, for images of a pseudo-reality mean more to the inhabitants than most of life as they actually live it.

There are usually a few cans (never bottles) of beer on the carpet, which itself is highly patterned. Objects — dirty washing, the containers of takeaway meals, newspapers — are strewn all over the place and piled in corners. The disorder is not the result of a violent struggle, but of the way the inhabitants have lived for years, even — or especially — if they are unemployed and have nothing much else to attend to but their domestic tasks. Oddly enough, given their physical unattractiveness, the people who live here are prey to the most violent sexual passions and obsessions. Jealousy and degradation are universal. In their testimony, neighbours say they took no notice of the screaming and banging and cries of ‘I’m going to kill you!’ because they are so utterly commonplace in the area.

Quite often, the murdered person has declared her undying love for the man who kills her, scrawling his name in lipstick, with a heart with an arrow through it, on the lavatory wall, or having his name tattooed on her upper arm, or writing epistles of appallingly abject, but freely entered, submission to him. (Sometimes I am not sure whether the sentiment expressed or the orthography is the more appalling.) When I look back on all these murders and murderers, what do I feel? And do I remember the murderers as evil men, who joyfully did what they knew to be wrong and were prepared to take the consequences, even as they tried to avoid them? Did they all have black hearts upon which murder had been inscribed since birth?

No. I am overwhelmed by a sense of the unfitness for life of all the participants in these sordid dramas: their main problem was that they had not the faintest idea how to live and yet — this is the hallmark of modernity — they were plentifully supplied with ego.

They had received no guidance from religion, naturally enough, since God is dead for them, and never has been very much alive. As for social convention, it has not so much been destroyed as turned inside-out. The poor who once prided themselves on such things as respectability, cleanliness, honesty, orderliness and thrift, often in the most difficult circumstances, now pride themselves on their bohemianism. Disorder and chaos are a metonym for freedom and authenticity. But they are bohemians without being artistic, and the result is a squalor scarcely credible in times of supposed prosperity.

Well, you might say, these are murderers you are talking about, and not even a random sample of murderers. But it would be an interesting experiment to give the life histories of ten people who came from the kind of milieu that I have described — only one of whom was a murderer — to those who think that murderers are completely different from everyone else, and ask them to pick him out of the ten in advance of any special knowledge. I think the results would be alarming.

I am not so much saying that there but for the grace of God go we, or rather they, as the real surprise is that the murder rate in Britain is so low by international standards (though some research recently suggested that it would be five times higher than it is if techniques of emergency surgery were the same as in 1960, since when the rate has in fact more than doubled, meaning that there are ten times as many murderous assaults now as in 1960). The low rate is all the more surprising when you consider that fatal weapons kitchen knives — are within the grasp of all. Surely it is time for the government to act?