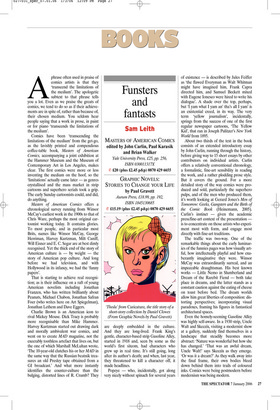 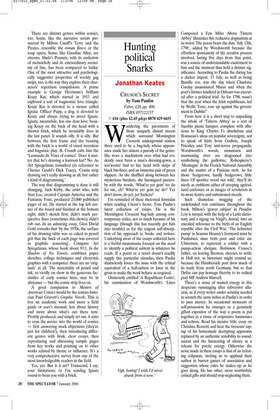 Comics have been ‘transcending the limitations of the medium’ from the get-go, as the lavishly printed and compendious coffee-table book, Masters of American Comics, accompanying a joint exhibition at the Hammer Museum and the Museum of Contemporary Art in Los Angeles, makes clear. The first comics were more or less inventing the medium on the hoof, so the ‘limitations’ actually came later — as genres crystallised and the mass market in strip cartoons and superhero serials took a grip. The early Sunday cartoonists could, and did, do anything.

Masters of American Comics offers a chronological survey running from Winsor McCay’s earliest work in the 1900s to that of Chris Ware, perhaps the most original cartoonist working today. It contains glories. To most people, and in particular most Brits, names like Winsor McCay, George Herriman, Harvey Kurtzman, Milt Caniff, Will Eisner and E. C. Segar are at best dimly recognised. Yet the thick end of the story of American culture is — by weight — the story of American pop culture. And long before we had television, and with Hollywood in its infancy, we had the ‘funny papers’.

That is starting to achieve real recognition; as is their influence on a raft of young American novelists including Jonathan Franzen, who has written brilliantly about Peanuts, Michael Chabon, Jonathan Safran Foer (who writes here on Art Spiegelman), Jonathan Lethem and Dave Eggers.

Charlie Brown is an American icon to rival Mickey Mouse. Dick Tracy is probably more recognisable than Mike Hammer. Harvey Kurtzman started out drawing dark and morally ambivalent war comics, and went on to create MAD magazine, not the execrably toothless artefact that lives on, but the one of which Marshall McLuhan wrote, ‘The 10-year-old clutches his or her MAD in the same way that the Russian beatnik treasures an old Presley tape obtained from a GI broadcast.’ And what more instantly identifies the counter-culture than the bulging, distorted lines of R. Crumb? They are deeply embedded in the culture. And they are long-lived. Frank King’s gentle, character-based strip Gasoline Alley, started in 1918 and, seen by some as the world’s first sitcom, had characters who grew up in real time. It’s still going, long after its author’s death; and when, last year, they threatened to kill a character off, it made headlines.

Popeye — who, incidentally, got along very nicely without spinach for several years of existence — is described by Jules Feiffer as ‘the flawed Everyman as Walt Whitman might have imagined him, Frank Capra directed him, and Samuel Beckett mixed with Eugene Ionesco were hired to write his dialogue’. A shade over the top, perhaps, but ‘I yam what I yam an’ tha’s all I yam’ is an existential creed, in its way. The very term ‘yellow journalism’, incidentally, springs from the success of one of the first regular newspaper cartoons, ‘The Yellow Kid’, that ran in Joseph Pulitzer’s New York World from 1895.

About two thirds of the text in the book consists of an extended introductory essay by John Carlin, running through the history, before giving way to 15 short essays by other contributors on individual artists. Carlin offers a relatively conventional chronology, a formalistic, fine-art sensibility in reading the work, and a rather plodding prose style. But it covers the ground. For a more detailed story of the way comics were produced and sold, particularly the superhero pulps, and of the men who produced them, it’s worth looking at Gerard Jones’s Men of Tomorrow: Geeks, Gangsters and the Birth of the Comic Book (Heinemann, 2005). Carlin’s instinct — given the academic press/fine-art context of the presentation is to concentrate on those artists who experiment most with form, and engage most directly with fine-art traditions.

The traffic was two-way. One of the remarkable things about the early luminaries of the funnies pages was how visually artful, how intellectually playful and how exuberantly imaginative they were. Winsor McCay was extraordinarily surreal, and an impeccable draughtsman. His best known works — Little Nemo in Slumberland and Dream of the Rarebit Fiend — both take place in dreams, and the latter stands as a constant caution against the eating of cheese on toast before bed. The dream worlds allow him great liberties of composition: distorting perspectives; incorporating visual paradoxes, framing his figures in fantastical architectural spaces.

Even the homely-seeming Gasoline Alley was highly self-aware. In a 1930 strip, Uncle Walt and Skeezix, visiting a modernist show at a gallery, suddenly find themselves in a landscape that steadily becomes more abstract: ‘Nature was wonderful but how she has changed.’ ‘That was an awful dream, Uncle Walt!’ says Skeezix as they emerge. ‘Or was it a dream?’ As they walk away into the final frame, their own bodies bleed down behind them into trails of coloured inks. Comics were being postmodern before modernism was being modern. There are distinct genres within comics, too. Some, like the narrative serials pioneered by Milton Caniff’s Terry and the Pirates, resemble the roman fleuve or the soap opera. Some, like Gasoline Alley, are sitcoms. Shulz’s Peanuts, with its undertow of melancholy and its extraordinary economy of line, has been compared to haiku. One of the most attractive and psychologically suggestive properties of weekly gag strips, too, is the way they explore their characters’ repetition compulsions. A prime example is George Herriman’s brilliant Krazy Kat, which started in 1913 and explored a sort of tragicomic love triangle. Krazy Kat is devoted to a mouse called Ignatz. Officer Pupp, a dog, is devoted to Krazy and always trying to arrest Ignatz. Ignatz, meanwhile, has one dear love: beaning Krazy on the back of the head with a thrown brick, which he invariably does in the last panel. It sounds silly. It is silly. But between the first frame and the beaning with the brick is a world of visual invention and linguistic play. R. Crumb calls him the ‘Leonardo da Vinci of comics’. Does it matter that he’s drawing a kartoon kat? No. As Art Spiegelman remarked (in reference to Chester Gould’s Dick Tracy), ‘Comic strip drawing isn’t really drawing at all, but rather a kind of diagramming.’ The way that diagramming is done is still changing. Jack Kirby, the artist who, with Stan Lee, created Captain America and the Fantastic Four, produced 25,000 published pages of art. He started at the top left corner of the board and finished at the bottom right; didn’t sketch first; didn’t mark perspective lines (sometimes this shows); didn’t rub out. In an admiring essay, Glen David Gold remarks that ‘by the 1970s, the surface of his drawing table was so caked in pencil grit that the back of each page was covered in graphite seasoning’. Compare Art Spiegelman, whose book about 9/11, In the Shadow of No Towers, combines paper sketches, collage techniques and electronic graphics with a computer: there are no ‘originals’ at all. The materiality of pencil and ink, so vividly on show in the generous facsimiles of early comics here, may be in abeyance — but the comic strip lives on.

A good companion to Masters of American Comics would be the comics historian Paul Gravett’s Graphic Novels. This is less an academic work and more a field guide or user’s manual; less about history and more about what’s out there now. Prettily produced, and simply set out, it aims to coax the novice into the world of comics — first answering stock objections (they’re just for children!), then introducing different genres with brisk, clear essays, then reproducing and discussing sample pages from key works and pointing on to other works related by theme or influence. It’s a very comprehensive survey from one of the most knowledgeable readers in the field.

Yes, yes. But is it art? Transcend, I say, your limitations; or I’m sending Ignatz round to bean you with a brick.