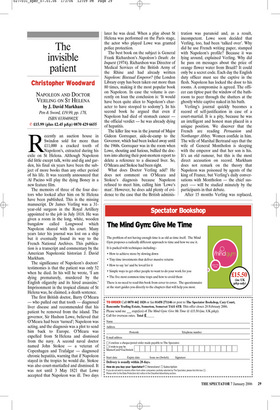 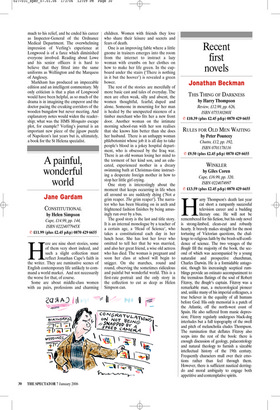 NAPOLEON AND DOCTOR VERLING ON ST HELENA by J. David Markham Pen & Sword, £19.99, pp. 178, ISBN 033048902X ✆ £15.99 (plus £2.45 p&p) 0870 429 6655 Recently an auction house in Swindon sold for more than £11,000 a cracked tooth of Napoleon’s, extracted during his exile on St Helena. Although Napoleon did little except talk, write and dig and garden, his final six years have been the subject of more books than any other period of his life. It was recently announced that Al Pacino will play the dying Boney in a new feature film.

The memoirs of three of the four doctors who looked after him on St Helena have been published. This is the missing manuscript. Dr James Verling was a 31year-old surgeon in the Royal Artillery appointed to the job in July 1818. He was given a room in the long, white, wooden bungalow called Longwood which Napoleon shared with his court. Many years later his journal was lost on a ship but it eventually found its way to the French National Archives. This publication is a transcript and commentary by the American Napoleonic historian J. David Markham.

The significance of Napoleon’s doctors’ testimonies is that the patient was only 52 when he died. In his will he wrote, ‘I am dying prematurely, murdered by the English oligarchy and its hired assassins.’ Imprisonment in the tropical climate of St Helena was, he claimed, a death sentence.

The first British doctor, Barry O’Meara — who pulled out that tooth — diagnosed liver disease and recommended that his patient be removed from the island. The governor, Sir Hudson Lowe, believed that O’Meara had been ‘turned’; Napoleon was acting, and the diagnosis was a plot to send him back to Europe. O’Meara was expelled from St Helena and dismissed from the navy. A second naval doctor named John Stokoe — a veteran of Copenhagen and Trafalgar — diagnosed chronic hepatitis, warning that if Napoleon stayed in the tropics he would die. Stokoe was also court-martialled and dismissed. It was not until 3 May 1821 that Lowe accepted that Napoleon was ill. Two days later he was dead. When a play about St Helena was performed on the Paris stage, the actor who played Lowe was granted police protection.

The best book on the subject is General Frank Richardson’s Napoleon’s Death: An Inquest (1974). Richardson was Director of Medical Services of the British Army of the Rhine and had already written Napoleon: Bisexual Emperor? (the London Library copy has been taken out more than 80 times, making it the most popular book on Napoleon. In case the volume is currently on loan the conclusion is: ‘It would have been quite alien to Napoleon’s character to have stooped to sodomy’). In his second book he argued that even if Napoleon had died of stomach cancer the official verdict — he was already dying of hepatitis.

The killer line was in the journal of Major Gideon Gorrequer, aide-de-camp to the Governor, which had been locked away until the 1960s. Gorrequer was in the room when Lowe, shouting and furious, bullied the doctors into altering their post-mortem report to delete a reference to a diseased liver. So, O’Meara and Stokoe had been right.

What does Doctor Verling add? He does not comment on O’Meara and Stokoe’s diagnosis because Napoleon refused to meet him, calling him ‘Lowe’s man’. However, he does add plenty of evidence to the case that the British adminis tration was paranoid and, as a result, incompetent. Lowe soon decided that Verling, too, had been ‘talked over’. Why did he use French writing paper, stamped with Napoleon’s profile? Because it was lying around, explained Verling. Why did he pass on messages about the price of orange flower water from Brazil? It could only be a secret code. Each day the English duty officer must see the captive in the flesh. Napoleon has locked the door to his rooms. A compromise is agreed. The officer can tiptoe past the window of the bathroom to peer through the shutters at the ghostly white captive naked in his bath.

Verling’s journal quickly becomes a record of self-justification in case of a court-martial. It is a pity, because he was an intelligent and honest man placed in a unique position. We discover that the French are reading Persuasion and Northanger Abbey. Women confide in him. The wife of Marshal Bertrand says that the wife of General Montholon is sleeping with the emperor and that her son is his. It’s an old rumour, but this is the most direct accusation on record. Markham does not remark on the theory that Napoleon was poisoned by agents of the king of France, but Verling’s daily conversations with Montholon — the chief suspect —– will be studied minutely by the participants in that debate.

After 15 months Verling was replaced, much to his relief, and he ended his career as Inspector-General of the Ordnance Medical Department. The overwhelming impression of Verling’s experience at Longwood is of a farce which diminished everyone involved. Reading about Lowe and his senior officers it is hard to believe that they fitted into the same uniforms as Wellington and the Marquess of Anglesey.

Markham has produced an impeccable edition and an intelligent commentary. My only criticism is that a plan of Longwood would have been helpful, as so much of the drama is in imagining the emperor and the doctor pacing the creaking corridors of the wooden bungalow but never meeting. And explanatory notes would widen the readership; what was the HMS Mosquito escape plot, for example? Verling’s journal is an important new piece of the jigsaw puzzle of Napoleon’s last years but is, ultimately, a book for the St Helena specialist.