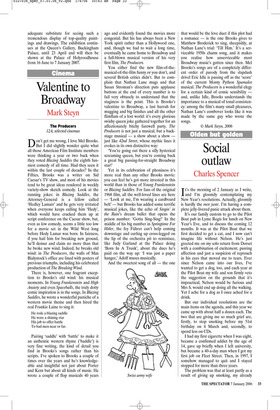 The Producers 12A, selected cinemas

Don’t get me wrong, I love Mel Brooks. But I did slightly wonder quite what all those American Film Institute members were thinking a year or two back when they voted Blazing Saddles the eighth funniest comedy of all time. Had they seen it within the last couple of decades? In the Fifties, Brooks was a writer on Sid Caesar’s TV show, and most of his movies tend to be great ideas rendered in weekly variety-show sketch comedy. Look at the running jokes: in Blazing Saddles, the Attorney-General is a fellow called ‘Hedley Lamarr’ and he gets very irritated when everyone keeps calling him ‘Hedy’, which would have cracked them up at script conference on the Caesar show, but, even as low comedy, seems a little too low for a movie set in the Wild West long before Hedy Lamar was born. In fairness, if you hail him for breaking new ground, he’ll demur and claim no more than that he broke new wind. Indeed, he breaks old wind: in The Producers, the walls of Max Bialystock’s office are lined with posters of previous triumphs, including his celebrated production of The Breaking Wind.

There is, however, one fragrant exception to Brooks’s old wind: his musical moments. In Young Frankenstein and High Anxiety and even Spaceballs, the truly dotty comic inspiration is in the songs. In Blazing Saddles, he wrote a wonderful pastiche of a western movie theme and then hired the real Frankie Laine to sing it:

He rode a blazing saddle He wore a shining star His job to offer battle To bad men near or far.

Pairing ‘saddle’ with ‘battle’ to make it an authentic western rhyme (‘baddle’) is very fine writing, the kind of detail you find in Brooks’s songs rather than his scripts. I’ve spoken to Brooks a couple of times over the years and he’s knowledgeable and insightful not just about Porter and Kern but about all kinds of music. He wrote a couple of flop musicals 40 years ago and evidently found the movies more congenial. But his has always been a New York spirit rather than a Hollywood one, and, though we had to wait a long time, eventually he came home to Broadway and a full-blown musical version of his very first film, The Producers.

You either find the new film-of-themusical-of-the-film funny or you don’t, and several British critics didn’t. But to complain that Nathan Lane mugs and that Susan Stroman’s direction puts applause buttons at the end of every number is to fail very obtusely to understand that the staginess is the point. This is Brooks’s valentine to Broadway, a last hurrah for mugging and big finishes and all the other flimflam of a lost world: it’s every glorious swishy queen joke gathered together for an affectionately bitchy farewell party. The Producers is not just a musical, but a backstage musical — a show about a show just like 42nd Street, whose mythic lines it evokes in its own distinctive way: ‘You’re going out there a silly hysterical screaming queen, but you’re coming back a great big passing-for-straight Broadway star!’ Yet in its celebration of phoniness it’s more real than any other Brooks movie: you can feel he’s got more invested in this world than in those of Young Frankenstein or Blazing Saddles. For fans of the original 1968 film, all the well-loved lines are here — ‘Look at me, I’m wearing a cardboard belt’ — but Brooks has added some terrific musical jokes, like the echo of Singin’ in the Rain’s dream ballet that opens the prison number: ‘Gotta Sing-Sing!’ In the middle of his big number in Springtime For Hitler, the fey Führer can’t help coming downstage and curling up cross-legged on the lip of the orchestra pit to reminisce, like Judy Garland at the Palace doing ‘Born In A Trunk’, about the dues he’s paid on the way up: ‘I was just a paper hanger,’ Adolf muses musically.

And the sweetest song of all — the one that would be the love duet if this plot had a romance — is the one Brooks gives to Matthew Broderick to sing, sheepishly, at Nathan Lane’s trial: ‘Till Him.’ It’s a serviceable 1950s charm song, and it makes you realise how unserviceable most Broadway music’s gotten since then. Mel Brooks’s songs are of a completely different order of parody from the slapdash drivel Eric Idle is passing off as the ‘score’ of the current Monty Python Spamalot musical. The Producers is a wonderful elegy for a certain kind of comic sensibility and, unlike Idle, Brooks understands the importance to a musical of tonal consistency: among the film’s many small pleasures, Nathan Lane’s combover looks like it was made by the same guy who wrote the songs.