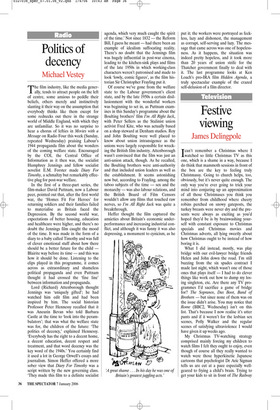 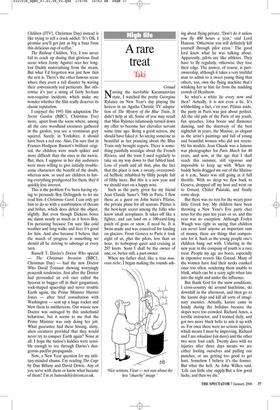 Ican’t remember a Christmas where I watched so little Christmas TV as this one, which is a shame in a way, because I do think that mammoth sessions in front of the box are the key to feeling truly Christmassy. Going to church helps, too, obviously, but it’s never quite enough. The only way you’re ever going to trick your mind into conjuring up an approximation of all those Christmases you think you remember from childhood where cheery robins perched on snowy gateposts, the turkey breasts were never dry and the presents were always as exciting as you’d hoped they’d be is by brainwashing yourself with constant exposure to Christmas specials and Christmas movies and Christmas adverts, all lying sweetly about how Christmas ought to be instead of how boring it is.

What I did instead, mostly, was play bridge with our evil-lawyer bridge friends Helen and John down the road. I’m still buzzing from the six spades contract I made last night, which wasn’t one of those ones that plays itself — I had to do clever things like work out how to dump my losing singleton, etc. Are there any TV programmes I’d sacrifice a game of bridge for? The Sopranos, Das Boot, Band of Brothers — but since none of them was on the issue didn’t arise. You may notice that Rome (BBC2, Wednesday) isn’t on this list. That’s because I now realise it’s utter pants and if it weren’t for the lesbian sex scenes, Polly Walker and the regular scenes of satisfying ultraviolence I would have given it up weeks ago.

My Christmas TV-watching strategy comprised mainly forcing my children to watch films I felt they ought to enjoy, even though of course all they really wanted to watch were those hyperkinetic Japanese cartoons that psychologist Dr Aric Sigman tells us are cut at a pace especially wellgeared to frying a child’s brain. Trying to get your kids to sit in front of The Railway Children (ITV1, Christmas Day) instead is like trying to tell a crack addict: ‘It’s OK. I promise you’ll get just as big a buzz from this delicious cup of coffee.’ The Railway Children. Yes, I too never fail to crack up during that glorious final scene when Jenny Agutter sees her longlost Daddy materialising from the steam. But what I’d forgotten was just how thin the rest is. There’s the other famous scene where they avert a rail disaster by waving their conveniently red petticoats. But otherwise it’s just a string of fairly ho-hum non-sequitur incidents, which make me wonder whether the film really deserves its classic reputation.

I enjoyed the 1993 film adaptation The Secret Garden (BBC1, Christmas Eve) more, apart from the scene where, among all the cute woodland creatures gathered in the garden, you see a verminous grey squirrel. Surely, in Yorkshire, it should have been a red one. Also, I’m sure that in Frances Hodgson Burnett’s brilliant original, the children were much spikier and more difficult than the ones in the movie. But, then, I suppose in her day audiences were more willing to give initially troublesome characters the benefit of the doubt, whereas now, so used are children to having everything predigested for them, they’d quickly lose interest.

This is the problem I’ve been having trying to persuade Boy Delingpole to let me read him A Christmas Carol. I can only get him to do so with a combination of threats and bribes, which does defeat the object, slightly. But even though Dickens bores me damn nearly as much as it bores Boy, I’m persisting because I’m sure like cold weather and long walks and liver it’s good for him. And also because I believe that the march of progress is something we should all be striving to sabotage at every turn.

Russell T. Davies’s Doctor Who special — The Christmas Invasion (BBC1, Christmas Day) — had the new Doctor Who David Tennant showing worryingly peacenik tendencies. Just after the Doctor had persuaded an evil race called the Sycorax to bugger off in their gargantuan, rock-shaped spaceship and never trouble Earth again, the Prime Minister Harriet Jones — after brief consultation with Washington — sent up a huge rocket and blew them to smithereens. Our wussie new Doctor was outraged by this underhand behaviour, but it seems to me that the Prime Minister was only doing her job. What guarantee had these hissing, slimy, alien creatures provided that they would never try to conquer Earth again? None at all. I hope the nation’s kiddies were sensible enough to see through Davies’s dangerous pacifist propaganda.

Now, a New Year question for my military-minded chums. I’m reading The Cage by Dan Billany and David Dowie. Any of you serve with them or know what became of them? I’m at Jamesdel@dircon.co.uk.