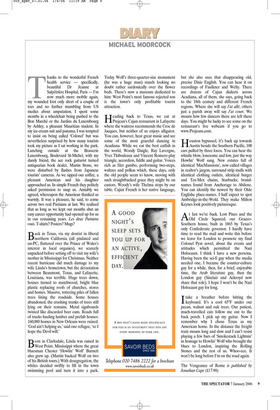 Dr Jeanne at Salpêtrière Hospital, Paris — I’m now much more mobile again, my wounded foot only short of a couple of toes and no further mumbling from US medics about amputation. I spent some months in a wheelchair being pushed to the Bon Marché or the Jardins du Luxembourg by Ashley, a pleasant Mauritian student. In my ice-cream suit and panama, I was tempted to insist on being called ‘Colonel’ but was nevertheless surprised by how many tourists took my picture as I sat working in the park. Lunching outside at the Brasserie Luxembourg, Boulevard St-Michel, with my dandy friend, the ace rock guitarist turned antiquarian book dealer, Martin Stone, we were disturbed by flashes from Japanese tourists’ cameras. As we sipped our coffee, a pleasant American and his daughter approached us. In simple French they politely asked permission to snap us. Amiably we agreed, whereupon the American thanked us warmly. It was a pleasure, he said, to come across two real Parisians at last. We realised that as long as we kept our mouths shut an easy career opportunity had opened up for us in our remaining years. Les deux Parisiens vrais. T-shirts? Posters? Mugs?

Back in Texas, via my dentist in liberal northern California (all pixilated and un-PC, flattered over the Prince of Wales’s interest in local organics), we scarcely unpacked before setting off to visit my wife’s mother in Mississippi for Christmas. Neither recent hurricane did much damage to my wife Linda’s hometown, but the devastation between Beaumont, Texas, and Lafayette, Louisiana, was terrible. Huge trees down, houses turned to matchwood, bright blue plastic replacing roofs of churches, stores and homes. Massive, tottering piles of fallen trees lining the roadside. Some houses abandoned, the crushing trunks of trees still lying on their remains. Metal signboards twisted like discarded beer cans. Roads full of trucks hauling lumber and prefab houses: 160,000 homes in New Orleans were ruined. ‘God ain’t helping us,’ said one refugee, ‘so I hope the Devil will.’ Born in Clarksdale, Linda was raised in West Point, Mississippi where the great bluesman Chester ‘Howlin’ Wolf’ Burnett also grew up. (Martin backed Wolf on two of his British tours.) With desegregation, the whites decided swiftly to fill in the town swimming pool and turn it into a park. Today Wolf’s three-quarter-size monument (he was a huge man) stands looking no doubt rather sardonically over the flower beds. There’s now a museum dedicated to him: West Point’s most famous rejected son is the town’s only profitable tourist attraction.

Heading back to Texas, we eat at Prejean’s Cajun restaurant in Lafayette where the waitress recommends the Croc de Jacques, but neither of us enjoys alligator. You can, however, hear great music and see some of the most graceful dancing in Acadiana. While we eat the best catfish in the world, Woody Daigle, Ray Lavergne, Yves Thibodeaux and Vincent Romero play triangle, accordion, fiddle and guitar. Voices rich as filet gumbo, performing two-steps, waltzes and polkas which, these days, only the old people seem to know, moving with such straightbacked grace they might be on castors. Woody’s wife Thelma stops by our table. Cajun French is her native language, but she also uses that disappearing old, precise Dixie English. You can hear it on recordings of Faulkner and Welty. There are dozens of Cajun dialects across Acadiana, all of them, she says, going back to the 18th century and different French regions. Where she will say J’ai allé, others just a parish away will say J’ai couri. We mourn how few dancers there are left these days. You might be lucky to see some on the restaurant’s live webcam if you go to www.Prejeans.com.

Houston bypassed, it’s back up towards Austin beside the Southern Pacific, 100 cars pulled by three locos. You can hear the whistle blow, lonesome and low, just the way Howlin’ Wolf sang. New estates full of identical ‘MacMansions’, now called villages in realtor’s jargon, surround strip malls with identical clothing outlets, identical burger and Tex-Mex chains, Starbucks; brandnames found from Anchorage to Abilene. You can identify the newest by their Olde Englishe place-names. I half expect to spot Ambridge-in-the-Wold. They make Milton Keynes look positively picturesque.

At last we’re back. Lost Pines and the Old Circle Squared, our GraecoSouthern house, built in 1865 by Texas’s only Confederate governor. I hardly have time to read the mail and write this before we leave for London to promote my final Colonel Pyat novel, about the events and attitudes which permitted the Nazi Holocaust. I think I have a new persona. Having been the sci-fi guy when the media needed one, I became the counter-culture guy for a while, then, for a brief, enjoyable time, the Arab literature guy, then the London guy (Sinclair and Ackroyd now share that role). I hope I won’t be the Nazi Holocaust guy for long.

Itake a breather before hitting the keyboard. It’s a cool 65°F under our pecan, walnut and oak trees. Our patient, much-travelled cats follow me out to the back porch. I pick up my guitar. Now I remember why I chose Texas as my American home. In the distance the freight train moans long and slow and I can’t resist playing a few bars of ‘Smokestack Lightnin’ in homage to Howlin’ Wolf who brought the blues to London, inspiring the Rolling Stones and the rest of us. Whoo-eee. It won’t be long before I’m on the road again.

The Vengeance of Rome is published by Jonathan Cape (£17.99).