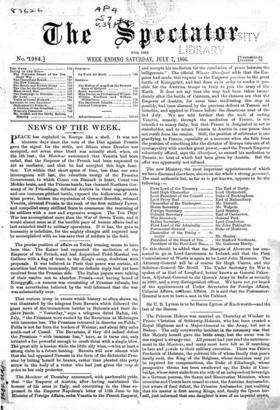 Page 1, 7 July 1866 — The precise position of affairs on Friday evening seems to
Close

The precise position of affairs on Friday evening seems to

have been this. The Kaiser had requested the mediation of the Emperor of the French, and had despatched Field-Marshal von Gablenz with a flag of truce to the King's camp, doubtless with proposals. It was believed in Paris that peace was certain, all securities had risen immensely, but no definite reply had yet been received from the Prussian side. The Italian papers were talking of their resolve not to abandon Prussia—not having heard of Koniggrez,—a rumour was circulating of Prussian refusals, but it was nevertheless believed by the well informed that the war was substantially over.