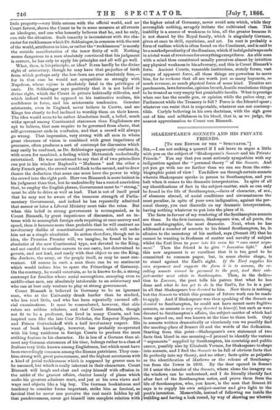 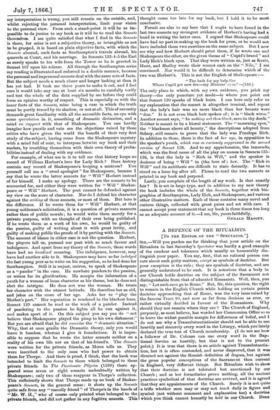 SHAKESPEARE'S SONNETS AND HIS PRIVATE

[TO THE EDITOR OF THE " SPECTATOR."] SIR,-I am not seeking a quarrel if I ask leave to argue a little with you on the subject of "Shakespeare's Sonnets and his Private Friends." You say that you most seriously sympathize with my indignation against the " personal theory " of the Sonnets. And yet you go with me no farther than we can see from the auto-

biographic point of view ! You follow me through certain sonnets wherein Shakespeare speaks in person to Southampton, and you halt when it comes to the dramatic interpretation. In spite of all my identifications of fact in the subject-matter, such as can only be found in the life of Southampton, facts of character, of sex, of absences abroad, of social conditions and circumstances the most peculiar, in spite of your own indignation, against the per- sonal theory, you cast discredit on my dramatic interpretation, having nothing whatever to put into the place of it.

The facts in favour of my rendering of the Southampton sonnets

are these. In the first instance, Shakespeare was, of all poets, the least autobiographic, the most dramatic. Next, when he has addressed a number of sonnets to his friend Southampton, he, in allusion to the monotony of his method, says (Sonnet 38) that he cannot be wanting in freshness of matter and novelty of subject whilst the Earl lives to pour into his verse his " own sweet argu- ment." Then the friend is to give " Invention light." And this new argument is so excellent that it is too_ good to be committed to common paper, but, in some choice shape, is to stand against the Earl's sight. If the Earl supplies his own argument and suggests the form it is to assume, the re- sulting sonnets cannot be personal to the poet, and their sub- ject-matter must relate to Southampton. Then, in the dedica- tion to Lucrece, the poet tells his patron that what he has done and what he has yet to do is the Earl's, for he is a part in all that Shakespeare has devoted to him. Now there is nothing but the Sonnets to which this promise of future work can be made to apply. And if Shakespeare was then speaking of the Sonnets as devoted to Southampton, he could not have meant mere fugitive sonnets, or sonnets in any way devoted to himself, but such as were devoted to Southampton's affairs, the subject-matter of which had been agreed on, and was known at the time to them both. Only in sonnets written dramatically or vicariously can we possibly find the meeting-place of Sonnet 38 and the words of the dedication. Starting from this point—Shakespeare's own statement of two facts that blend in one meaning—I proceed to identify the various " arguments" supplied by Southampton, his courtship and public career, possibly also by Elizabeth Vernon, for Shakespeare to shape into sonnets, and I find the Sonnets to be full of obvious facts that fit perfectly into my theory, and no other ; facts quite as palpable as the identification of Marlowe or the release of Southamp- ton from the Tower in 1603. By the door opened in Sonnet 38 I enter the interior of the Sonnets, where alone the imagery on the windows, can be understood, and I do literally identify fact after fact of the Southampton series, and prove them from the life of Southampton, who, you know, is the man that Sonnet 38 says is to supply his own subject-matter and give light to the poet's invention. Meanwhile, instead of following me inside the building and having a look round, by way of showing me wherein

possible to do justice to my book as it will be to read the Sonnets themselves. I am quite satisfied that what I find in the Sonnets is there, for mine is not a subjective theory, so intangible as not

to be grasped, it is based on plain objective facts, with which the

Sonnets abound, such facts as Southampton's travels abroad, his quarrels at Court, and his marriage. In Sonnets 123-4-5 the Earl as surely speaks to his wife from the Tower as he is greeted in Sonnet 107 upon his release. All through the Southampton series my reading is illustrated and enforced in a double manner, because the personal and impersonal sonnets deal with the same sets of facts. But the subject needs a much closer and longer looking at than it has yet had. It took me three years to make it out, and I feel sure it would take any one at least six months to carefully verify and test the whole of the data supplied by me before they could form an opinion worthy of respect. This is especially so with the inner facts of the Sonnets, mine being a case in which the truth must be partly traced by its shadow, or not at all. This of necessity demands great familiarity with all the accessible facts, an eye with some speculation in it, something of dramatic divination, and a mind en rapport with that of Shakespeare. You can hardly imagine how puerile and vain are the objections raised by those critics who have given the world the benefit of their very first study of the subject, having come from the Shakespeare mystery with a mind full of mist, to interpose betwixt my book and their readers, by troubling themselves with their own theory of proba- bilities instead of dealing with my evidence.

For example, of what use is it to tell me that history keeps no record of William Herbert's love for Lady Rich ? Does history contain any record of Shakespeare's keeping a mistress? You yourself call me a " cruel apologist " for Shakespeare, because I say that he wrote the latter sonnets for " Will" Herbert instead of for himself. I make no apology. There are the sonnets to be accounted for, and either they were written for " Will " Shakes- peare or " Will" Herbert. The poet cannot be defended against my view on the score of character. Nor do I defend his character against the writing of these sonnets, or most of them. But here is the difference. If he wrote them for " Will" Herbert, at that young nobleman's solicitation, it is a question of private manners rather than of public morals ; he would write them merely for a private purpose, with no thought of their ever being published. If he wrote them as a work of his own, he would be guilty of the passion, guilty of writing about it with great levity, and guilty of making public the proofs of it by parting with the Sonnets. The amount of blame in either case is not the question. Herbert, the players tell us, pursued our poet with so much favour and indulgence. And apart from my theory of the Sonnets, these words have had no localized meaning. The indulgence, however, may have had another side to it. Shakespeare may have so far indulged the fast young peer as to write on his suggestion, as he had done for Southampton. Still it is unjust, untrue, to speak of Shakespeare as a " pander" in the case. He nowhere panders to the passion, or writes for its glorification. He accepts the infatuation of a youth for a woman of loose character as his theme, but he does not abet the intrigue. He does not woo the woman. He treats her character with the utmost latitude. He describes her as old, and jokes on the score of her age. Asks her to "play the Mother's part." Her reputation is rendered in the blackest hues. Sonnet 129 cannot be read as the work of a pander. Instead of pandering to the passion he fights all he can against it, and makes sport of it. On this subject you say you do " not believe that Shakespeare played the pimp to his own dishonour." But you are afraid that he did conceive the " dramatic situation." Why, that at once gratits the Dramatic theory, only you would leave it baseless, whereas I give it foundations. It is impos- sible to suppose that he wrote the latter sonnets neither on a reality of his own life nor on that of his friend's. The Sonnets were written for the private friends, as Meres tells us. They were inscribed to the only man who had power to obtain them for Thorpe. And there is proof, I think, that the book was intended to limit the Sonnets to those which belonged to these private friends. In The Passionate Pilgrim (1599) there ap- peared some seven or eight sonnets undoubtedly written by Shakespeare ; only two of these reappear in Thorpe's collection. This sufficiently shows that Thorpe made up no book of Shakes- peare's Sonnets, in the general sense ; it shuts up the Sonnets quite safe from any " rascally friend " of Thorpe's in the hands of "Mr. W. H.," who of course only printed what belonged to the private friends, and did not gather in any fugitive, sonnets. This

thought came too late for my book, but I hold it to be most conclusive.

Permit me also to say here that I ought to have found in the last two sonnets my strongest evidence of Herbert's having had a hand in writing the latter ones. I argued that Shakespeare could have had no part in making up the book for press, or he would not have included those two exercises on the same subject. But I now see why and how Herbert should print them, if he wrote one and Shakespeare the other, on the given theme of " Cupid's brand " and Lady Rich's black eyes. That they were written so, just as Keats, Hunt, and Shelley wrote their sonnet each on the " Nile," I am convinced. Nor would it be difficult to determine which of the two was Herbert's. This is not the English of Shakespeare :—

" The bath for my help lies

The only place in which, with my own evidence, you prick my theory—the only puncture yet made—is where you point out that Sonnet 130 speaks of black hairs. I can here only refer to my explanation that the sonnet is altogether ironical, and repeat that the lady's hair was no more black than her breasts were "dun." It is not even black hair spoken of ; it is " black wires." Another sonnet says, " In nothing art thou black, save in thy deeds." Neither is meant to be a literal statement. The " mourning eyes," the "blackness above all beauty," the descriptions adopted from Sidney, still remain to prove that the lady was Penelope Rich. In addition to these, there is the fact of her age, in opposition to the speaker's youth, which was so curiously suppressed in the second version of Sonnet 138. And to my apprehension, the innuendo, which was the final cause of all the play on names in Sonnets 135- 136, is that the lady is " Rich in Will," and the speaker is desirous of being " Will " in (the love of) her. The "Rich in Will" and its antithesis are difficult to state decently. It has to stand on a lame leg after all. Please to read the two sonnets as printed in my book and perpend.

Lastly, you complain of the length of my work. Is that exactly fair? It is set in large type, and in addition to my new theory the book includes the whole of the Sonnets, together with bio- graphies of Southampton, Lady Rich, and Shakespeare, and various other illustrative matters. Each of these contains many novel and curious things, collected with great pains and set with care. I cannot accept your statement that my book is three times too long as an adequate account of it.—I am, Sir, yours faithfully,