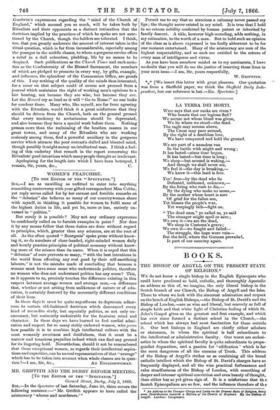 Wno says that our ranks are riven?

Who boasts that our legions fled ?

We accuse not whose blood was given, We lie where we stood—the dead.

The eagle may scream above, The Croat may pace around, By the right of a deathless love, We have conquered and hold the ground.

We are part of a nameless van In the battle with might and wrong ; It has lasted—since time began,

It has lasted—but time is long; We sleep—but around is waking,— And though we shall never see, We feel it—the day is breaking,—

We know it—this land is free.

Yes ! free—by the dead who lie

Defeated, unblessed, unknown,— By the living who rush to die,—

By the dying who make no moan,— By the mother whose heart is sore Of grief for the fallen son, Yet blesses the people's war, Yet weepingly bids—fight on.

" The dead ones," ye called us, ye said The stranger might spoil or save ; We own it—we are the dead, We sleep in Custozza's grave ;

We own it—we fought and failed— The struggle, the hope were vain—

But the field, where the German prevailed, Is part of our country again.