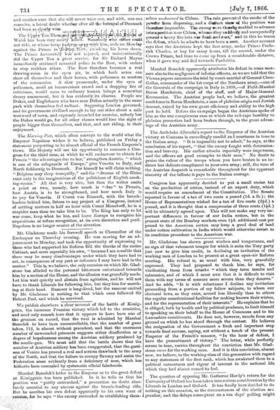 nearly Sometody who (Vier canti not ride, or whose horse hydrae wen' erith him, rode on Monday against the Prince in .110.1‘4:...R7At,..-Khhck;ug his horse down. The Prince fortunately Ws' mit injured, and unintentionally did the Upper Ten a great service, for Sir Richard Mayne immediately stationed mounted police in the Row, with orders to stop reckless riders. The Row therefore becomes a real drawing-room in the open air, in which both sexes can show off themselves and their horses, with policemen as masters of the ceremonies. A slow promenade, under the eyes of policemen, amid an inconvenient crowd and a dropping fire of criticisms, would seem to ordinary human beings a somewhat dreary amusement, but it has evidently its charms. People see Dukes, and Englishmen who have seen Dukes actually in the same park with themselves feel radiant. Supposing London governed, and its government civilized enough to lay out rides about a mile westward of town, and expressly intended for exercise, nobody but the Dukes would go, for all other classes would lose the sight of people bigger than themselves, and that, and not riding, is their enjoyment.