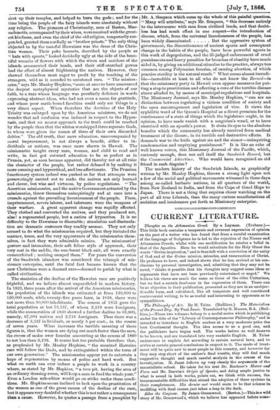 The Philosophy of Art. By H. Taine. (Bailliere.) The Materialism

of the Present Day. By Paul Janet. Translated by G. Masson, B.A. (Bail- liere.)—These two volumes belong to a useful series which is publishing under the title of the " Library of Contemporaneous Philosophy," and is intended to introduce to English readers at a very moderate price the. best Continental thought. The idea seems to us a good one, and the publishers have begun well. The works before us well deserve to be known, and are translated into very readable English. M. Taints endeavours to explain Art according to certain natural laws, and to arrive at certain general conclusions in respect to it. The mode of treat- ment will be quite new to most people in this country, and however far they may stop short of the author's final results, they will find much. suggestive thought and much careful analysis- in the wares of the investigation. M. Janet follows up very closely the arguments of the. materialistic school. He takes for his text Dr. Buchner's Matter rue!' Force and Mr. Darwin's Origin of Species, and doing ample justice to what is sound in both works, points out, we think with success, the insurmountable difficulties that attend the adoption of these systems in their completeness. His derider mot would seem to be that science is meddling with final causes just takes a leap in the dark.