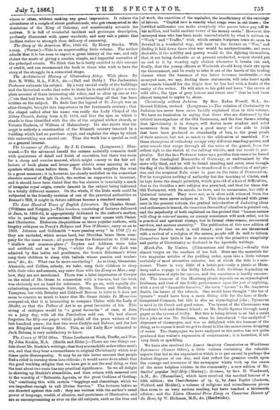 Page 23, 7 July 1866 — where or other, without making any great impression. It relates
Close

where or other, without making any great impression. It relates

the of work, the exactions of the capitalist, the insufficiency of the earning* adventures of a couple of street professionals, who gat transported to the of 'abeam "Capital now is smugly what crags were in old times ; the dominions of the King of Dahomy, and considerably astonish the fortified millionaire can make everybody who passes below pay toil to natives. It is full of wonderful incident and grotesque description, his million, and build another tower of his money castle." However, the, profusely illustrated with queer woodcuts, and may suit a palate that moneyed man who has been made uucomfortablo by what is written on

inclines rather to strength than delicacy of seasoning. "Work " and "Traffic," with which certain Scripture teats do seem to The Story of the American War, 1861-65. By Henry Stacks. With dovetail in a wonderful way, will turn to the lecture on " War," and a map. (Warne.)--This is an unpretending little volume. The author finding it laid down there that war would be unobjectionable, and even!

admits that it is too soon to expect a great history of the war, and only desirable, if the nobility and gentry would do the fighting themselves, claims the merit of giving a concise, simple, and impartial narrative of that, it not being desirable as at present conducted, women should put the principal events. We think that he is fairly entitled to this amount an end to it by wearing ugly clothes whenever it breaks out, and, of credit, and can recommend the book to those who wish to have the finally, that the young officers at Woolwich should keep their eye upon story of the struggle in a connected shape. the Government, and be ready to take it out of the hands of the trading The Architectural History of Glastonbury Abbey. With plans. By classes when the baseness of the latter becomes intolerable,— the. Rev. R. Willis, MA., F.RS., &c.—(Bell and Daldy.) The Jacksonian moneyed man, we say, finding these statements, will take heart again Professor exhausts his subject. By a very careful study of the buildings and console himself for the fright that he has had with a doubt of the