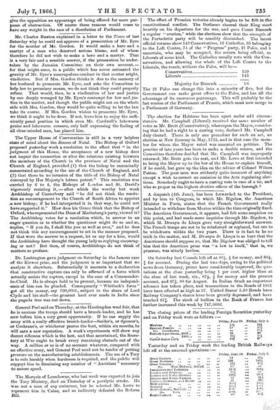 A despatch (4th June), has been forwarded to the President,

and by him to Congress, in which Mr. Bigelow, the American Minister in Paris, states that the French Government really intended to withdraw from Mexico within the time originally fixed. The American Government, it appears, had felt some suspicion on this point,, and had made some inquiries through Mr. Bigelow, to which M. Drouyn de Lhuys gave very straightforward answers. The French troops are not to be reinforced or replaced, but are to be withdrawn within the two years. There is in fact to be no trick in the matter, and M. Drouyn de Lhuya is so hurt that the Americans should suppose so, that Mr. Bigelow was obliged to tell him that the American press was " a law to itself," that is, we presume, was utterly lawless.