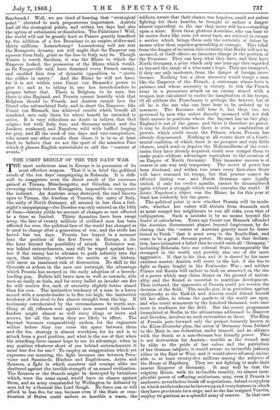 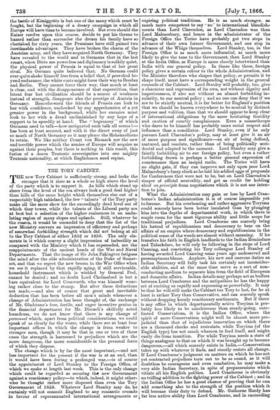 THE FIRST RESULT OF THE TEN DAYS' WAR.

THE most audacious man in Europe is in possession of its most effective weapon. That it is in brief the political result of the ten days' campaigning in Bohemia. It is diffi- cult to exaggerate even the direct result of the successes gained at Turnau, Miinchengratz, and Gitschin, and in the crowning victory before Koniggratz, impossible to exaggerate the indirect. An Austrian army destroyed, the road thrown open to Vienna, the freedom of Venetia, the unity of Italy, the unity of North Germany, all secured in less than a fort- night's campaigning—for Dresden was only entered on the 18th of June—history yields no account of changes so vast effected in a time so limited. Thirty dynasties have been swept away, the fate of twenty millions of civilized men has been affected for ever, the political face of the world has changed as it used to change after a generation of war, and the strife has lasted but ten days. Prussia has leaped in a moment into the position - of the first Power in Europe, is for the hour beyond the possibility of attack. Defensive war, war behind entrenchments, may still be waged against her ; but if the enemy has to advance, to push infantry into the open, that infantry, whatever its merits or its history, will incur an imminent risk of destruction. No skill in the generals or ardour in the men can outweigh the advantage which Prussia has secured in the early adoption of a breech- loading gun. Bullets kill brave men as well as cowards, able men as easily as fools, and for every bullet an invader can fire he will receive five, each of necessity slightly better aimed than his own. The instinctive tendency of a man in a hurry armed with a muzzle-loader is to fire too high, the instinctive tendency of his rival to fire almost straight from the hip. If testimony corroborated by the circumstances be worth any- thing at all, riflemen sent against men armed with breech- loaders might almost as well carry slings or bows and arrows, for all the harm they are likely to effect. The bayonet becomes comparatively useless, for the regiments wither before they can cross the space between them and the foe, strategy is almost worthless, for its end is to attack from a good position, and what is the use of that when the attacking force cannot hope to use its advantage, when in any position whatever short of one behind entrenchments it must lose five for one ? To employ an exaggeration which yet expresses our meaning, the fight becomes one between Peru- vians and Spaniards, Hindoos and Englishmen, Arabs and Zouaves, a fight in which numbers and courage alike are shattered against the terrible strength of an armed civilization. The Zouaves or the Guards might be destroyed by battalions which, were the arms equal, would have no chance against them, and an army commanded by Wellington be defeated by men led by a General like Lord Gough. No force can or will afford to lose five for one, because even if the State or com- bination of States could endure so horrible a waste, the soldiers, aware that their chance was hopeless, could not unless fighting for their hearths, be brought to endure a danger almost equivalent to the one they never will face—standing upon a mine. Even these glorious Austrians, who can bear to be mown down like corn, yet never turn, are rejoiced to escape a service which brings them only the certainty of defeat by means other than superior generalship or courage. This relief from the danger of invasion, this certainty that Berlin will not be menaced, of itself effects an immense change in the position of the Prussians. They can keep what they have, and they have North Germany, a prize which only one year ago they regarded as beyond the range of a wise man's hope. They are exempted, if they are only moderate, from the danger of foreign inter- ference. Nothing but a clear necessity would tempt a man like the Emperor of the French, a statesman whose forte is patience and whose necessity is victory, to risk the French army in a premature attack on an enemy armed with a weapon just calculated to excite the imagination of his troops. Of all soldiers the Frenchman is perhaps the bravest, but of all he is the one who can least bear to be ordered up to massacre. The Russians will bear it, but they, too, are governed by men who unless directly menaced will not risk their masses in positions where the bayonet has no fair play. England is out of the game, and there is therefore no power, it may be doubted whether there is even a combination of powers, which could reseat the Princes whom Prussia has already dispossessed. Nothing at all events short of a Conti- nental coalition, of which there is no prospect and very little chance, could avail to deprive the Hohenzollerns of the terri- tories they have already acquired, could now compel them to make peace without advantages equivalent to the creation of an Empire of North Germany. This immense success is of course in one way only temporary. The secret of power has been disclosed, and within two years every first-class State will have rearmed its troops, but that process cannot be effected during war, and North Germany once legally united, if only for twelve months, cannot be dismembered again without a struggle which would convulse the world. If Louis Napoleon's object was the Rhine, he for this year at least has evidently lost the game.

The political point is now whether Prussia will be mode- rate, whether her rulers will abstain from demands such as must compel her neighbours to run all risks, even that of subjugation. Such a mistake is by no means beyond the limits of calculation. Years ago Count von Bismark offended the Austrian Government almost beyond forgiveness, by de- claring that the " centre of Austrian gravity must be trans- ferred to Pesth " that it must sway to the South-East, and cease to be a great German power. He may, in that declara- tion, have intimated a belief that he could unite all "Germany," including Bohemia, into one colossal State, incomparably the strongest in the world, and possibly also one of the most aggressive. If that is his idea, and it is shared by his more cautious master, Austria will resist to the last, if she has to fight as Spain fought in the Peninsular War ; and neither France nor Russia will endure to look on unmoved on the rise of a power which may claim Alsace on the ground of nation- ality, and the Sound as essential to maritime development. Thus irritated, the opponents of Prussia could yet reverse the decision of the field. The needle gun is as powerless against earthworks as the Enfield, and Austria could defend herself till her allies, to whom the markets of the world are open, and who count armourers by the hundred thousand, were once more in readiness for the field. But the recent programme formulated at Berlin in the ultimatums addressed to Hanover and Dresden, involves no such extremities as these. The King of Prussia puts forward only the project formerly known as the Klein-Deutsche plan, the union of Germany from Jutland to the Main in one federation under himself, and an affiance with the South as a non-German but friendly power. This is not destruction for Austria ; terrible as the wound may be alike to the pride of her rulers and the patriotism of her German subjects, it would arouse no invincible jealousy either in the East or West, and it would above all seem endur- able to at least twenty-five millions among the subjects of the House of Hapsburg. They are not fighting to make their master Emperor of Germany. It may well be that the reigning House, with its invincible tenacity, its almost inex- plicable power of ezilluring misfortune, may, even if Prussia is moderate, nevertheless break off negotiations, defend every plain on which earthworks can be thrown up and every fortress in which theyhave provisions fora siege, and as she has resigned Venetia, employ its garrison as a splendid army of reserve. In that case

the battle of Koniggriitz is but one of the many which must be fought, but the beginning of a dreary campaign in which all Europe will have time to become involved. But even should the Kaiser resolve upon this course, decide to putt his throne to hazard rather than surrender the dream his family have so cherished for sixty years, the Prussians have still gained two inestimable advantages. They have broken the charm of the Austrian army, and they have acquired North Germany. They have revealed to the world and to Germans that in the last resort, when Diets are powerless and diplomacy is sulkily quiet, the physical power of Prussia is equal to that of her great rival. No German quite believed that. No German could ever quite shake himself free from a belief that, if provoked be- yond endurance, the white coats might force their way to Breslau and Berlin. They cannot force their way, that much at least is clear, and with the disappearance of that superstition, that latent fear lest civilization should be a source of weakness instead of strength, disappears also the prestige of Austria in Germany. Henceforward the friends of Prussia can look to her with confidence, unchecked by any apprehension of a yet greater power in the background, while her enemies must look to her with a dread undiminished by any hope of a support to be speedily at hand. The " hegemony " of which. Germans used to talk—how antiquated such talk all seems!— has been at least secured, and with it the direct sway of just so much of North Germany as it may please the Hohenzollerns to retain. We like neither Count von Bismark nor the new and terrible power which the armies of Europe will acquire as against their peoples, but there is nothing in this result, this fusion of a dozen Teutonic sovereignties into one mighty Teutonic nationality, at which Englishmen need repine.