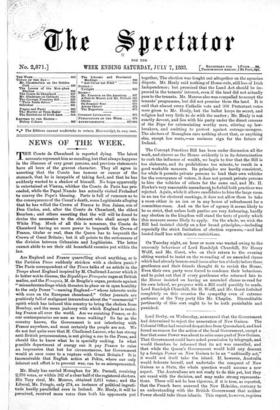 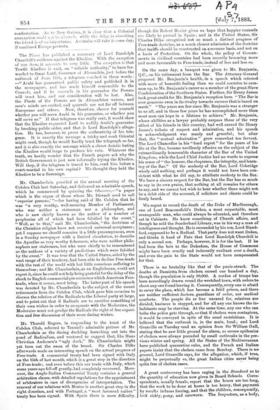 Page 1, 7 July 1883 — Lord Derby, on Wednesday, announced that the Government had determined
Close

Lord Derby, on Wednesday, announced that the Government had determined

to reject the annexation of New Guinea. The Colonial Office had received despatches from Queensland, and had, found no reason for the action of the local Government, except a fear that some Power was about to seize some part of New Guinea. That Government could have asked permission by telegraph, and. would therefore be informed that its act was cancelled, and that while the Queen's Government would hold any descent by a foreign Powor on New Guinea to be an "unfriendly act," it would not itself take the island. If, however, Australia would federate herself, and undertake the conquest of New Guinea as a State, the whole question would assume a new aspect. The Australians are not ready to do this yet, but they are vexed with the decision, and may make strong representa- tions. These will not be less vigorous, if it is true, as reported, that the French have annexed the New Hebrides, contrary to an understanding with the British Government that neither Power should take those islands. This report, however, requires

confirmation. As to New Guinea, it is clear that a Colonial annexation could uot be allowel; while the delay in absorbing the Wand is of no importance. Australia will take it some day, if combined Europe protests.