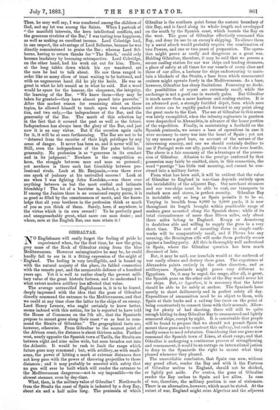 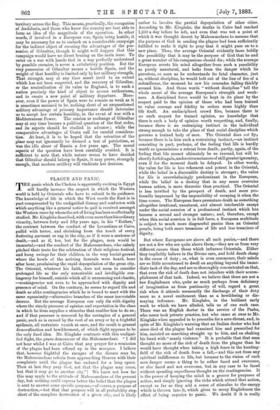 NO Englishman will easily forget the feeling of pride he experienced when, for the first time, he saw the grim, grey nass of the Rock of Gibraltar rising from the blue Mediterranean. However unimaginative he may be, he could hardly fail to see in it a fitting expression of the might of The average untravelled Englishman is, it is to be feared, deeply impressed with the idea that the guns of Gibraltar' directly command the entrance to the Mediterranean, and that we could at any time close the latter to the ships of an enemy. Lord Henry Lennox, who ought certainly to know better, seems imbued with this notion, for he is reported to have told the House of Commons on the 7th ult., that the *Spaniards propose to mount guns along their coast "80 as best to com- mand the Straits of Gibraltar." The geographical facts are, however, otherwise. From Gibraltar to the nearest point of the African coast, the distance is about thirteen miles. Further west, nearly opposite the Spanish town of Tarifa, the Straits are between eight and nine miles wide, but soon broaden out into the Atlantic. It would be rash to limit the range which future guns may command ; but, with artillery, as with small- arms, the power of hitting a mark at extreme distances does not keep pace with the power of throwing projectiles to those distances ; and it may probably be asserted with safety that no gun will ever be built which will render the entrance to the Mediterranean dangerous—not to say impossible—to the slowest steamer, even by day-time.

What, then, is the military value of Gibraltar ? Northwards from the Straits the coast of Spain is indented by a deep Bay, about six and a half miles long. The peninsula of which Gibraltar is the southern point forms the eastern boundary of this Bay, and is faced along its whole- length and overlapped on the south by the Spanish coast, which bounds the Bay on the west. The guns of Gibraltar effectively command this Bay, and deny its use to an enemy's shipping. To silence them by a naval attack would probably require the combination of two Powers, and one or two years of preparation. The opera- tion might prove as costly and dangerous as a great war. Holding Gibraltar, therefore, it may be said that we possess a secure coaling station for our war ships and trading steamers, a place of safety at all times for our vessels of every class and those of our allies, a harbour for ships endeavouring to main- tain a blockade of the Straits, a base from which unarmoured cruisers might operate freely in the Mediterranean. As a base, however, Gibraltar has sharp limitations. Possessing no docks, the possibilities of repair are extremely small, while the anchorage is not a good one in westerly gales. But Gibraltar is much more than a mere harbour and coaling station. It is an advanced post, a strongly fortified chlpot, from which men and stores can be rapidly pushed forward to any point along the great route to the East. The use of Gibraltar in this sense was lately exemplified, when the infantry regiments in garrison were despatched to Alexandria, in advance of the home portion of the expedition. Finally, in maintaining a foothold on the Spanish peninsula, we secure a base of operations in case it were necessary to carry war into the heart of Spain ; yet not by any means a good base, on account of the nature of the intervening country, and one we should certainly decline to use if Portugal were our ally, possibly even if she were hostile. The above is a fair summary of the advantages of the posses- sion of Gibraltar. Allusion to the prestige conferred by that possession may fairly be omitted, since, in this connection, the word " prestige " has little real meaning, and cannot be con- strued into a military factor.

From what has been said, it will be evident that the value of Gibraltar to England in war-time depends entirely upon the inviolability of the adjacent Bay. Our merchant steamers and our war-ships must be able to coal, our transports to embark men and stores, in perfect security. Gibraltar Bay is inviolable only so long as Spain permits it to be so. Varying in breadth from 8,000 to 9,000 yards, it is now throughout its length brought within practicable range of modern guns mounted along the Spanish shore ; while of its total circumference of more than fifteen miles, only about three miles belong to England. Krupp or Armstrong is doubtless able and willing to supply the guns in a very short time. The cost of mounting them in simple earth- works will be comparatively small, and if Plevna has any meaning, the Remington rifle will make them perfectly secure against a landing party. All this is thoroughly well understood in Spain, where the Gibraltar question has been much discussed of late.

But, it may be said, our ironclads would at the outbreak of war easily silence and destroy these guns. The experience of Alexandria points entirely in the other direction, and as artillerymen Spaniards might prove very different to. Egyptians. Or, it may be urged, the range, after all, is great, the Spanish guns on the other side of the Bay would never hit our ships. But, ex hypothesi, it is necessary that the latter should be able to lie safely at anchor. The Spaniards have. merely to shoot deliberately and in perfect safety all day. Expenditure of ammunition need be no object to them, with Spain at their backs and a railway line (now on the point of being constructed) to connect them with their arsenals. Allow- ing for plenty of bad shooting, there will still be quito enough hitting to deny Gibraltar Bay to unarmoured and lightly armoured ships, except by night. It is conceivable that people will be found to propose that we should not permit Spain to mount these guns and to construct this railway, but such a view hardly seems to need refutation. Considering that our guns now command the Spanish town of Linea, at short range, and that Gibraltar is undergoing a continuous process of strengthening and rearmament, it would be an outrage on international justice to deny to the Spaniards the right to m)unt what they pleased whenever they pleased. The unavoidable conclusion, that Spain can now, without any grand effort, render the Bay and with it the Fortress of Gibraltar useless to England, should not be shirked, or lightly put aside. Per contra, the guns of Gibraltar render the Bay useless to Spain and her allies. In case of war, therefore, the military position is one of stalemate. There is an alternative, however, which must be stated. At the outset of war, England might seize Algeciras and the adjacent

territory across the Bay. This means, practically, the occupation of Andalusia, and those, who know the country are best able to form an idea of the magnitude of the operation. In other words, if involved in a European war, Spain being hostile, it may be necessary for us to embark on a considerable campaign for the indirect object of securing the advantages of the pos- session of Gibraltar, though it might well happen that this campaign would have no direct bearing on the main issue. To enter on a war with hands tied in a way perfectly understood by-possible enemies, is never a satisfactory position. But the very possession of Gibraltar means a hostile Spain, and the weight of that hostility is limited only by her military strength. That strength may at any time assert itself to an extent which has not been suspected, and the recovery of Gibraltar, or the neutralisation of its value to England, is to such a nation precisely the kind of object to arouse enthusiasm, and to create a new point of military departure. More- over, even if the power of Spain were to remain as weak as it is sometimes assumed to be, nothing short of an unquestioned military advantage of primary importance should determine us to accept her certain hostility, in the event of war with a Mediterranean Power. The cession or exchange of Gibraltar may at any time become a political question of the first order, and its aspects should be studied in advance ; while the comparative advantages of Ceuta call for careful considera- tion. At least, it is to be hoped that the retention of the place may not ignorantly be deemed a test of patriotism, as was the idle abuse of Russia a few years ago. The moral aspects of the question have been carefully avoided. It is sufficient to note that, while nature seems to have decided that Gibraltar should belong to Spain, it may prove, strangely enough, that modern artillery will vindicate her decision.