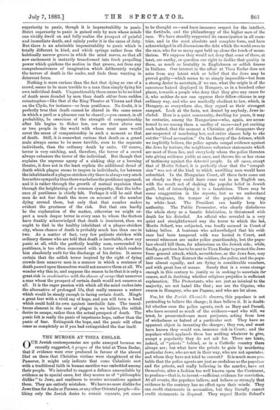 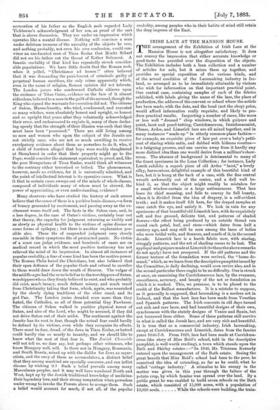 THE MURDER AT TISZA ESSLAR.

01JR Jewish contemporaries are quite annoyed because we recently suggested, a propos of the trial at Tisza Esslar, that if evidence were ever produced in favour of the absurd. libel on them that Christian victims were slaughtered at the Passover, it might only indicate that some Cabalistic sect with a traditional faith in human sacrifice was embedded among their people. We intended to suggest a defence unassailable by evidence as to special cases, but they accuse us of "philosophic dislike" to Jews, and readiness to receive accusations against them. They are entirely mistaken. We have no more dislike for Jews than for Arabs or Parsees, or any other Oriental people—dis- liking only the Jewish desire to remain separate, yet cease to be thought so—and have immense respect for the intellect, the fortitude, and the philanthropy of the higher men of the race. We have steadily supported its emancipation in all coun- tries, and in the most absolute and complete form, and have acknowledged in all discussions the debt which the world owes to the race, who for so many ages held up alone the torch of mono- theism. We suppose they would not deny that some of them, at least, are earthy, or question our right to dislike that quality in them, as much as brutality in Englishmen or selfish finesse in Italians. Our interest in the affair at Tisza Ender does not arise from any latent wish or belief that the Jews may be proved guilty—which seems to us simply impossible—but from a strong desire to ascertain, if we can, what the origin is of the rancorous hatred displayed in Hungary, as in a hundred other places, towards a people who deny that they give any cause for it, who neither do nor can oppress their fellow-citizens in any ordinary way, and who are markedly obedient to law, which, in Hungary, as everywhere else, they regard as their strongest rampart. Look at the facts, not denied by anybody, Jews in- cluded. Here is a quiet community, dwelling for years, it may be centuries, among the Hungarians—who, again, are accus- tomed to see among them a medley of races—and yet exciting such hatred, that the moment a Christian girl disappears they are suspected of murdering her, and entire classes help to eke out the "blood accusation." On the theory of the defence, which we implicitly believe, the police agents compel evidence against the Jews by torture, the neighbours volunteer statements which are most of them lies, and everybody whom the police threaten into giving evidence yields at once, and throws his or her stone of testimony against the detested people. In all cases, except that of Moritz Scharf, it is perfectly clear that the " compul- sion " was not of the kind to which unwilling men would have submitted. In the Hungarian Court, all these facts come out as clearly as they could have come out in an English one, with the result not of shaking the popular belief in Jewish guilt,. but of intensifying it to a fanaticism. There may be some exaggeration in the reports, but as we understand the telegrams, the temper of the population is rising

to white - heat. The President can hardly keep his authority. The Public Prosecutor, who clearly disbelieves the whole story as a fanatic fabrication, is threatened with death for his disbelief. An official who revealed in a very quiet and straightforward way the terror to which the lad, Moritz Scharf, was subjected, was loudly accused in Court of taking bribes. A boatman who acknowledged that his evid- ence had been tampered with was hooted in Court, and several witnesses are under police guardianship, lest the popu- lace should kill them, for admissions on the Jewish side; while, finally, a garrison has to be sent to Tisza Esslar to protect the Jews from general attack, which, nevertheless, as the Jews fear, may still come off. They distrust the soldiers, the police, and the popu- lace almost equally, and are flying in considerable numbers, and with great loss of means. Surely that is a scene strange enough in this century to justify us in seeking to ascertain its- causes, and in doubting whether religious prejudice is sufficient explanation. The Protestants, who are just as inimical to the majority, are not hated like that ; nor are the Gipsies, who swarm in Hungary, who are Pagans, and who are let alone.

For, let the Tewish Chronicle observe, this populace is not pretending to believe the charge; it does believe it. It is doubt- ful whether even the police agents, such as Bary and Peczeli, who have secured so much of the evidence—and who will, we trust, be prosecuted—are mere perjurers, acting from love of wickedness or hatred of a particular sect. They have no apparent object in inventing the charges ; they run, and must have known they would run, immense risk in Court; and the populace which applauds them has nothing whatever to give, except a popularity they do not ask for. There are hints, indeed, of "priests" behind, as in a Catholic country there always are ; but what have the priests to gain by murdering particular Jews, who are not in their way, who are not apostates, and whom they have not tried to convert P It is much more pro- bable that the police agents are just as credulous as the populace and the priests, and really believing in the murder, have set themselves, after a fashion too well known upon the Continent, to produce—that is, to invent—sufficient evidence for conviction. At all events, the populace believe, and believe so strongly that evidence to the contrary has no effect upon their minds. They can credit statements in accusation, but they literally cannot credit statements in disproof. They regard Moritz Scharf's

accusation of his father as the English mob regarded Lady Tichborne's acknowledgment of her son, as proof of the sort that is above discussion. They are under an impression which operates like a mental disease. Nothing will convince a man under delirium tremens of the unreality of the objects he sees, and nothing probably, not even his own confession, would con- vince an uneducated man of Tisza Esslar that Moritz Scharf did not see his father cut the throat of Esther Solymosi. A fanatic credulity of that kind has repeatedly struck consider- able populations. We have little doubt that the Roman mob, when it yelled, " Christianos ad leones !" often believed that it was demanding the punishment of criminals guilty ot perpetual human sacrifices, the only crime apparently which, even in the name of religion, Roman opinion did not tolerate. The London jurors who condemned Catholic citizens upon the evidence of Titus Oates, evidence on the face of it almost ridiculous, believed to a man in the guilt of the accused, though the King who signed the warrants for execution did not. The citizens of Salem, Massachusetts, who tried, condemned, and, executed so many witches, were absolutely honest and upright, so honest and so upright that years after they voluntarily acknowledged their error, and endeavoured to expiate it, many of them declar- ing openly that the strength of their illusion was such that they must have been "possessed." There are still living among us men and women who upon the subject of the Jesuits are not strictly sane, who are not so much unwilling to receive exculpatory evidence about them as powerless to do it, who, if a child of fourteen alleged that boys were weekly slaughtered at Stonyhurst in order that their property might go to the Pope, would consider the statement equivalent to proof, and, like the poor Hungarians of Tisza Esslar, would think all witnesses to the contrary either terrorised, or bribed. The phenomenon, 'however, needs no evidence, for it is universally admitted, and the point of intellectual interest is its operative cause. What is it that in certain cases sweeps out of the minds of whole classes, composed of individuals many of whom must be shrewd, the power of appreciating, or even understanding, evidence ?

Many observers who have studied the history of such scenes believe that the cause of them is a positive brain-disease,—a form of lunacy generated by excitement, and passing away as the ex- citement wears itself out. The facts in the Salem case, and, in a less degree, in the case of Oates's victims, certainly bear out that theory, the capacity for judgment returning as visibly and as slowly as physical health to the victims of spine disease or some forms of epilepsy ; but there is another explanation pos- sible also. These fits of suspended judgment very closely resemble in their symptoms fits of protracted panic. No victim of a scare can judge evidence, and hundreds of cases are on medical record in which the most positive testimony has not relieved the mind of its impression. In almost all instances of popular credulity, a fear of some kind has been the motive-power. The Roman Plebs hated the Christians, but also believed that their open defiance of the popular Gods and refusal to sacrifice to them would draw down the wrath of Heaven. The vulgar of the middle-ages had the sa me belief as to the worshippers of Satan, worshippers whom they firmly believed to exist, and who probably did exist, much lunacy, much defiant misery, and much recoil from Christianity taking that form, which, again, was nourished by the slowly dying .traditions of the older creed, and its god Pan. The London juries dreaded even more than they hated, the Catholics, as all of them potential Guy Fawkeses. The citizens of Salem walked in positive physical terror of Satan, and also of the Lord, who might be aroused, if they did not drive Satan out of their midst. The sentiment against the Jesuits has its root in fear, though the actual fear could hardly be defined by its victims, even while they recognise its effects. There must be fear, dread, of the Jews in Tisza Esslar, or hatred could hardly rise so nearly to insanity, and we should like to know what the root of that fear is. The Jewish Chronicle will not tell us, we dare say, but perhaps other witnesses, who know Hungary well, will. Is there not in Hungary, Roumania, and South Russia, mixed up with the dislike for Jews as separ- atists, and the envy of them as accumulators, a distinct belief that they among mankind are specially sorcerers, and can inflict disease by wishing it ? Such a belief prevails among many Mnssulman peoples, and it may well have wandered North and West, kept up by the Jewish traditional knowledge of medicine, their legendary lore, and their strong temptation when powerless -under wrong to invoke the Powers above to avenge them. Such a belief would account for much, if not all, of the popular

credulity, among peoples who in their habits of mind still retain the deep impress of the East.