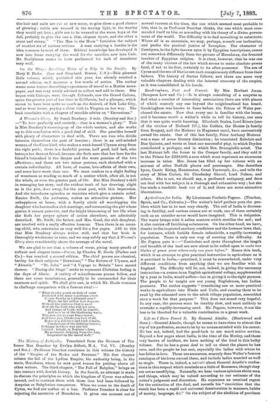 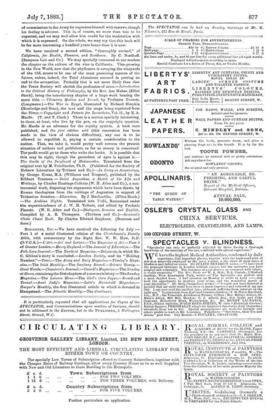 Life as I Hare Found It. By General Ainslie. (Blackwood

and Sons.)—General Ainslie, though he seems to have risen to almost the top of his profession, seems to be by no means satisfied with his career. He has not, indeed, had the good-luck to see much active service. Beyond a few pages about India, in the time of the Mutiny, and these very barren of incident, we have nothing of the kind in this bulky volume. But he has a great deal to tell us about the places he has seen, and the people he has met, especially the ladies with whom he has fallen in love. These are numerous, scarcely does Waller's famous catalogue of his loves exceed them, and include ladies married as well as single. There is, indeed, a naivete about General Ainslie' s confes- sions in this respect which reminds us a little of Rousseau, though they are not so unedifying. Naturally, we hear various opinions about men and things, which may be valued according to our estimate of the writer's judgment and discretion. He expresses an unmixed regret for the extinction of the duel, and records his "conviction that the result has been a rapid and universal deterioration in manners, habits of society, language, &c." On the subject of the abolition of purchase

of commissions in the Army he expresses himself with reserve, though his feeling is adverse. This is, of course, no more than was to be expected, and we may well allow him credit for the moderation with which it is expressed. On the whole, we may say that this book will be far more interesting a hundred years hence than it is now.