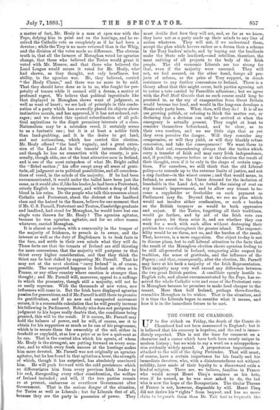 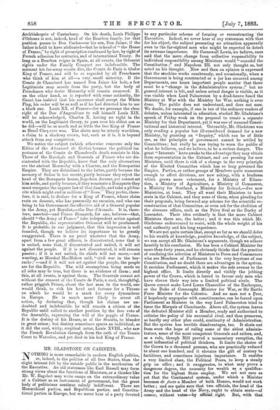 HP to five o'clock on Friday, the death of the Comte do Chambord had not been announced in England ; but it is believed that his recovery is hopeless, and the end is imme- diately expected. This is not the time for comment on a character and a career which have both been nearly unique in modern history ; but we wish to say a word on a misapprehen- sion evidently widely spread. A preposterous importance is attached to the will of the dying Pretender. That will must, of course, have a certain importance for his family and his immediate devotees, who, with a disinterestedness not without nobility, have made of their loyalty to a discrowned exile a kind of religion. There are, we believe, families in France who would accept Henri Cinq's nominee as his heir, even if he named, as he was once asked to do, the lad who is now the hope of the Bonapartists. The titular Throne of France is not, however, disposable by will. Henri Cinq did not derive his " rights " from bequest, and has no more claim to bequeath them than Dr. Tait had to bequeath the Archbishopric of Canterbury. On his death, Lords Philippe d'Orleans is not, indeed, head of the Bourbon family, for that position passes to Don Carlos—or his son, Don Jaime, if the father is held to have abdicated—but he is head of "the House of France," by right of prescription confirmed by law, by right of French adhesion for centuries, and of international Treaty. So long as a Bourbon reigns in Spain, at all events, the Orleanist rights under the Family Compact are indefeasible. The moment his far-away cousin dies, the Comte de Paris is titular King of France, and will be so regarded by all Frenchmen who think of him at all—a very, small minority. If the Comte de Chambord has named Don Jaime his heir, a few Legitimists may secede from the party, but the body of Frenchmen who desire Monarchy will remain unmoved. If, on the other hand, as is reported with some authority, the Count has insisted that his successor shall accept the White Flag, his order will be as null as if he had directed him to use a black one. Louis XX. of France—for we presume the clear right of the Due d'Angou]eme to call himself Louis XIX. will be acknowledged, Charles X. having no right in the world, on the Legitimist theory, to pass over his eldest son as he did—will be as much and as little the free King of France as Henri Ging ever was. The claim may be utterly worthless, a Claim to a shadowy crown, but, such as it is, it is beyond attack from any competitor.

We notice the subject (which otherwise concerns only the Editor of the Almanach de Gotha) because the political im. portance of the Comte de Chambord's death consists in this. Those of the Marshals and Generals of France who are dis- cnntented with the Republic, know that the only alternatives are the ahcient Monarchy with a Charter, and the Bonapartist Empire. They are disinclined to the latter, partly because the memory of Sedan'is too recent, partly because they reject the head of the Bonaparte house, Napoleon Jerome, yet cannot set Idea aside, and partly because, if they nominate a Bonaparte they must recognise the organic law of that family, and take a plebis- cite which might end in millions of" Noes." They prefer, there- fore,, it is said, to declare for a King of France, whose claim rests on descent, who has personally no enemies, and who can bring to his Government the effective aid of a General popular in the Army, yet Royalist,—the Due d'Aumale. It is, there- fore, asserted—and Prince Bismarck, for ono, believes—that, should " the Army of France" take independent action against the Republic, the representative Orleanist will be proclaimed. It is probable, in our judgment, that this impression is well founded, though we believe its importance to be greatly exaggerated. There is no proof whatever that the Army, apart from a few great officers, is discontented, none that it is united, none that, if discontented and united, it will act against the people. If it is not discontented, it will remain passive ; if it is not united, its chiefs will not move,—not wanting, as Marshal MacMahon said, "civil war in the bar- racks ;"—and if it will not act against the people, the people are for the Republic. The wild assumptions being made on all sides may be true, but there is no evidence of them ; and this, at all events, is against them. The Generals cannot act without the consent of the Comte de Paris, a cool, thoughtfql, rather priggish Prince, about the last man in the world, one would think, to risk his head and fortune for a Throne on which he would be a mark for every dynamiteur inEurope. Ho is much more likely to arrest all action, by declaring that, though his claims are un- doubted and indefeasible, he will remain a citizen of the Republic until called to another position by the free vote of the Assembly, expressing the will of the pepple of France. It is the destiny of his Houser as of the Stuarts, to blunder in great crises ; but destiny sometimes spares an individual, as it did the cool, witty, sceptical actor, Louis XVIII., who saw the French Revolution through from the oath of the Tennis Court to Waterloo, and yet died in his bed King of France.