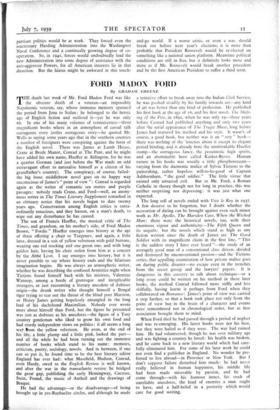 THE death last week of Mr. Ford Madox Ford was like the obscure death of a veteran—an impossibly Napoleonic veteran, say, whose immense memory spanned the period from Jena to Sedan: he belonged to the heroic age of English fiction and outlived it—yet he was only 66. In one of his many volumes of reminiscence—those magnificent books where in an atmosphere of casual talk outrageous story jostles outrageous story—he quoted Mr. Wells as saying some years ago that in the southern counties a number of foreigners were conspiring against the form of the English novel. There was James at Lamb House, Crane at Brede Manor, Conrad at The Pent, and he might have added his own name, Hueffer at Aldington, for he was a quarter German (and just before the War made an odd extravagant effort to naturalise himself as a citizen of his grandfather's country). The conspiracy, of course, failed: the big loose middlebrow novel goes on its happy way unconscious of James's " point of view ": Conrad is regarded again as the writer of romantic sea stories and purple passages: nobody reads Crane, and Ford—well, an anony- mous writer in The Times Literary Supplement remarked in an obituary notice that his novels began to date twenty years ago. Conservatism among English critics is extra- ordinarily tenacious, and they hasten, on a man's death, to wipe out any disturbance he has caused.

The son of Francis Hueffer, the musical critic of The Times, and grandson, on his mother's side, of Ford Madox Brown, " Fordie " Hueffer emerges into history at the age of three offering a chair to Turgenev, and again, a little later, dressed in a suit of yellow velveteen with gold buttons, wearing one red stocking and one green one, and with long golden hair, having his chair stolen from him at a concert by the Abbe Liszt. I say emerges into history, but it is never possible to say where history ends and the hilarious imagination begins. He was always an atmospheric writer, whether he was describing the confused Armistice night when Tietjens found himself back with his mistress, Valentine Wannop, among a horde of grotesque and inexplicable strangers, or just recounting a literary anecdote of dubious origin—the drunk writer who thought himself a Bengal tiger trying to tear out the throat of the blind poet Marston, or Henry James getting hopelessly entangled in the long lead of his dachshund Maximilian. Nobody ever wrote more about himself than Ford, but the figure he presented was just as dubious as his anecdotes—the figure of a Tory country gentleman who liked to grow his own food and had sturdy independent views on politics: it all seems a long way from the yellow velveteen. He even, at the end of his life, a little plump and a little pink, looked the part— and all the while he had been turning out the immense number of books which stand to his name: memoirs, criticism, poetry, sociology, novels. And in between, if one can so put it, he found time to be the best literary editor England has ever had: what Masefield, Hudson, Conrad, even Hardy, owed to the English Review is well known, and after the war in the transatlantic review he bridged the great gap, publishing the early Hemingway, Cocteau, Stein, Pound, the music of Antheil and the drawings of Braque.

He had the advantage—or the disadvantage—of being brought up in pre-Raphaelite circles, and although he made a tentative effort to break away into the Indian Civil Service, he was pushed steadily by his family towards art—any kind of art was better than any kind of profession. He published his first book at the age of 16, and his first novel, The Shift- ing of the Fire, in 1892, when he was only 19—three years before Conrad had published anything and only two years after the serial appearance of The Tragic Muse, long before James had matured his method and his style. It wasn't, of course, a good book, but neither was it an " arty " book— there was nothing of the 'nineties about it except its elegant period binding, and it already bore the unmistakable Hueffer stamp—the outrageous fancy, the pessimistic high spirits, and an abominable hero called Kasker-Ryves. Human nature in his books was usually a little phosphorescent— varying from the daemonic malice of Sylvia Tietjens to the painstaking, rather hopeless will-to-be-good of Captain Ashburnham, " the good soldier." The little virtue that existed only attracted evil. But to Mr. Ford, a Roman Catholic in theory though not for long in practice, this was neither surprising nor depressing: it was just what one expected.

The long roll of novels ended with Vive le Roy in 1937. A .few deserve to be forgotten, but I doubt whether the accusation of dating can be brought against even such minor work as Mr. Apollo, The Marsden Case, When the Wicked Man: there were the historical novels, too, with their enormous vigour and authenticity—The Fifth Queen and its sequels: but the novels which stand as high as any fiction written since the death of James are The Good Soldier with its magnificent claim in the first line, " This is the saddest story I have ever heard "—the study of an averagely good man of a conventional class driven, divided and destroyed by unconventional passion—and the Tietjens series, that appalling examination of how private malice goes on during public disaster—no escape even in the trenches from the secret gossip and the lawyers' papers. It is dangerous in this country to talk about technique—or a long essay could be written on his method in these later books, the method Conrad followed more stiffly and less skilfully, having learnt it perhaps from Ford when they collaborated on Romance: James's point of view was carried a step farther, so that a book took place not only from the point of view but in the brain of a character and events were remembered not in chronological order, but as free association brought them to mind.

When Ford died he had passed through a period of neglect and was re-emerging. His latest books were not his best, but they were hailed as if they were. The war had ruined him. He had volunteered, though he was over military age and was fighting a country he loved: his health was broken, and he came back to a new literary world which had care- fully eliminated him. For some of his later work he could not even find a publisher in England. No wonder he pre- ferred to live abroad—in Provence or New York. But I don't suppose failure disturbed him much: he had never really believed in human happiness, his middle life had been made miserable by passion, and he had come through—with his humour intact, his stock of unreliable anecdotes, the kind of enemies a man ought to have, and a half-belief in a posterity which would care for good writing.