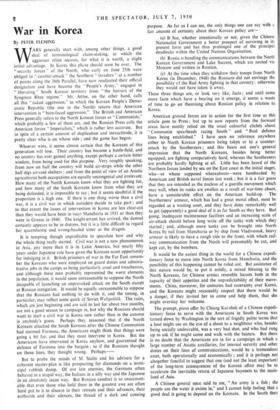 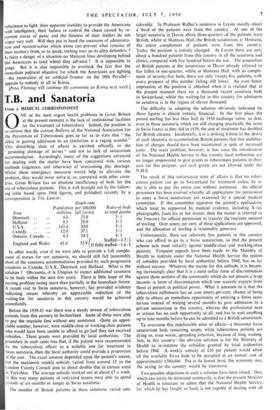 WARS generally start with, among other things, a good deal of terminological claim-staking, in which the aggressor often secures, for what it is worth, a slight initial advantage. In Korea this phase should soon be over. The " security forces " of the North, who early on June 25th were obliged to " counter-attack " the Southern " invaders " at a number of points along the 38th Parallel, have now readjusted their official designation and have become the " People's Army," engaged in " liberating " South Korean territory from " the horrors of the Syngman Rhee regime." Mr. Attlee, on the other hand, calls all this " naked aggression," to which the Korean People's Demo- cratic Republic (the one in the North) retorts that American intervention is " bare-faced aggression." The British and American Press generally refers to the North Korean forces as " Communists," which probably a few of them are, and the Russian Press calls the American forces " Imperialists," which is rather less accurate. But in spite of a certain amount of duplication and inexactitude, it is pretty clear who is on whose side ; and the game has begun.

Whoever wins, it seems almost certain that the Koreans of this generation will lose. Their country has become a battle-field, and no country has ever gained anything, except perhaps a certain bitter wisdom, from being used for this purpose. Very roughly speaking, from now on half the country will build air-strips while the other half digs air-raid shelters ; and from the point of view of an Asiatic agriculturist both occupations are equally uncongenial and irrelevant. How many of the North Koreans know what they are fighting for, and how many of the South Koreans know from what they are being defended, it is impossible to say ; but it seems doubtful if the proportion is a high one. If there is one thing worse than a civil war, it is a civil war in which outsiders decide to take part ; and to that extent the issues of intervention in Korea are less clear-cut than they would have been in (say) Manchuria in 1931 or than they were in Greece in 1940. The knight-errant has arrived, the damsel certainly appears to be in distress, but it is a little difficult to regard her quarrelsome and wrong-headed sister as the dragon.

It is tempting though unprofitable to speculate how and why the whole thing really started. Civil war is not a new phenomenon in Asia, any more than it is in Latin America, but nearly fifty years under Japanese rule have given the Koreans scant opportunity for indulging in it. British prisoners of war in the Far East remem- ber the Koreans who were employed on guard duties and adminis- trative jobs in the camps as being particularly cruel and treacherous, and although these men probably represented the worst elements in the population, it would seem unreasonable to suppose the North incapable of launching an unprovoked attack on the South except at Russian instigation. It would be equally unreasonable to suppose that the Russians had nothing to do with it, and the timing, in particular, may reflect some quirk of Soviet Weltpolitik. The rains, which are just beginning and are said to last for about two months, are not a good season to campaign in, but why the Russians should want to start a civil war in Korea now rather than in the autumn is anybody's guess. Perhaps they reasoned that if the North Koreans attacked the South Koreans after the Chinese Communists had stormed Formosa, the Americans might think that things were going a bit far, and that they must intervene in Korea. But the Americans have intervened in Korea anyhow, and guaranteed the defence of Formosa into the bargain ; so if the Russians thought on those lines, they thought wrong. Perhaps—

But to probe the minds of M. Stalin and his advisers for a coherent master-plan is like prospecting for diamonds on a muni- cipal rubbish dump. Of our late enemies, the Germans often behaved in a stupid way, the Italians in a silly way and the Japanese in an absolutely inane way. But Russian conduct is so unaccount- able that even those who hold them in the greatest awe are often hard put to it to discern in their retreats and their advances, their outbursts and their silences, the thread of a dark and cunning

purpose. As far as I can see, the only things one can say with a fair amount of certainty about their Korean policy are—

(a) It has, whether intentionally or not, given the Chinese Nationalist Government a better prospect of surviving in its present form and has thus prolonged one of the principal deadlocks within the United Nations Organisation.

(b) Russia is handling the communications between the North Korean Government and Lake Success, which are routed via Moscow and written in Russian.

(c) At the time when they withdrew their troops from North Korea (in December, 1948) the Russians did not envisage the possibility cf the Red Army fighting in that country: otherwise they would not have taken it away.

These three things are, or look very like, facts ; and until some more facts which have a bearing on it emerge, it seems a waste of time to go on theorising about Russian policy in relation to Korea.

American ground forces are in action for the first time as this -article goes to Press ; but up to now reports from the forward areas have mostly relied on the usual colourful clichés about " Communist spearheads racing South " and " fluid defence lines being established." I have seen no reference anywhere either to North Korean prisoners being taken or to a counter- attack by the Southerners ; and this bears out one's general impression that the North Koreans, besides being better equipped, are fighting comparatively hard, whereas the Southerners are probably hardly fighting at all. Little has been heard of the Northern forces landed by sea on the East coast in the initial stages, who—or whose supposed whereabouts—were bombarded by American and British naval forces last week ; but it is a fair guess that they are intended as the nucleus of a guerilla movement which may well, when its ranks are swollen as a result of war-time chaos, have a considerable effect on the American build-up. The Northerners' armour, which has had a great moral effect, must be regarded as a wasting asset, and they have done remarkably well to get (apparently) a good deal of it as far South as they have. Bad going, inadequate maintenance facilities and an increasing scale of air-attack should before long write off the tanks with which they started ; and, although more tanks can be brought into North Korea by rail from Manchuria or by ship from Vladivostok, heavy armour is likely to have a rough ride to the front, with which rail- way communication from the North will presumably be cut, and kept cut, by the bombers.

It would be the easiest thing in the world for a Chinese expedi- tionary force to move into North Korea from Manchuria, and the possibility of this happening cannot be ruled out. But assistance of this. nature would be, to put it mildly, a mixed blessing to the North Koreans, for Chinese armies resemble locusts both in the rapacity of their appetites and the unpredictability of their move- ments. China, moreover, for centuries had suzerainty over Korea, and the Koreans might reasonably suspect that there would be a danger, if they invited her to come and help them, that she might overstay her welcome.

The prompt, pious offer by Chiang Kai-shek of a Chinese expedi- tionary force to serve with the Americans in South Korea was turned down by Washington in the sort of frigidly polite terms that a host might use on the eve of a shoot to a neighbour who, besides being socially undesirable, was a very bad shot, and who had rung up to ask if he might come and walk with the beaters. But there is no doubt that the Americans are in for a campaign in which a large number of Asiatic auxiliaries, for internal security and other duties on their lines of communications, would be a tremendous asset, both operationally and economically ; and it is perhaps not altogether fanciful to suggest that one (and not the least important) of the long-term consequences of the Korean affair may be to accelerate the inevitable return of Japanese bayonets to the main- land of Asia.

A Chinese general once said to me, " An army is a fish ; the people are the water it swims In," and I cannot help feeling that a good deal is going to depend on the Koreans. In the South their reluctance to fight, their apparent inability to provide the Americans with intelligence, their failure to control the chaos caused by re- current waves of panic and the dimness of their leaders do not augur very well. Will they put in hand the measures of administra- tion and reconstruction which alone can prevent what remains of their territory from, so to speak, turning sour on its alien defenders ? Is there a danger of a situation on Malayan lines developing behind the Americans as (and when) they advance ? It is impossible to judge. But it is also impossible to overlook the fact that the immediate political objective for which the Americans are fighting —the restoration of an artificial frontier on the 38th Parallel— appeals to nobody at all in Korea. [Peter Fleming will continue his comments on Korea next week.]