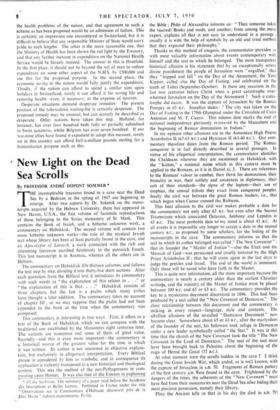 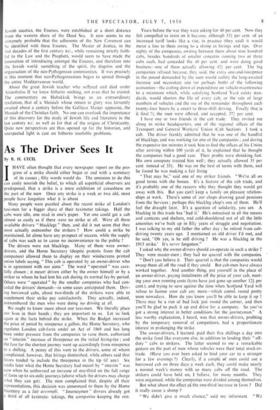 THE incomparable treasures found in a cave near the Dead Sea by a Bedouin in the spring of 1947 are beginning to emerge. After two reports by Dr. Sukenik on the manu- scripts acquired by the Hebrew University, there has appeared in New Haven, U.S.A., the first volume of facsimile reproductions of those belonging to the Syriac monastery of St. Mark. This contains the Book of Isaiah, and a hitherto unknown work, a commentary on Habakkuk. The second volume will contain two more hitherto unknown works—the rule of the mystical Jewish sect whose library has been at least partially found in the cave, and an Apocalypse of Lamech. a work connected with the rich and interesting literature ascribed fictitiously to the patriarch Enoch. This last manuscript is in Aramaic, whereas all the others are in Hebrew.

The commentary on Habakkuk fills thirteen columns, and follows the text step by step, dividing it into thirty-five short sections. After each quotation from the Biblical text it introduces its commentary with such words as " the explanation of this relates to . . ." or " the explanation of this is that. . . ." Habakkuk consists of three chapters, but the last is a psalm which many critics have thought a later addition. The commentary takes no account of chapter III ; so we may suppose that the psalm had not been appended to the book at the time when the commentary was composed.

This commentary is interesting in two ways. First, it offers us a text of the Book of Habakkuk which we can compare with the traditional one established by the Massoretes eight centuries later. The variants are numerous and some of them of great value. Secondly—and this is even more important—the commentary is a historical source of the greatest value for the time in which it was written. Its author is not interested in objective explana- tion, but exclusively in allegorical interpretation. Every Biblical phrase is considered by him as symbolic, and in consequence its application is violently transposed to a new historical and theological context. This was the method of the neo-Pythagoreans in com- menting upon Homer. It was also that of the Essenes in explaining * Of the Sorbonne. The summary of a paper read before the AcarMmie des Inscriptions et Belles Lettres. Published in France under the title " Observations sur le Commentaire d'Habacuc decouvert pres de la Mer Morte" (adrien-maisonneuve, Paris).

the Bible ; Philo of Alexandria informs us: " Then someone takes the (sacred) Books and reads, and another, from among the more expert, explains all that is not easy to understand in a passage ; usually it is with the help of symbols by an old and tried method that they expound their philosophy."

Thanks to this method of exegesis, the commentator provides us with most valuable information about events contemporary with himself and the sect to which he belonged. The most transparent historical allusion is his statement that by an exceptionally severe divine punishment the people of Jerusalem were " engulfed," that they " tripped and fell " on the Day of the Atonement, the Yom Kippur, called also the Day of Fasting, and celebrated on the tenth of Tishri (September-October). Is there any occasion in the last two centuries before Christ when a great catastrophe over- whelmed Jerusalem on the Day of the Atonement ? Such a catas- trophe did occur. It was the capture of Jerusalem by the Roman Pompey in 63 n.c. Josephus states: " The city was taken on the Day of Fasting in the 179th Olympiad under the Consulate of Caius Antonius and M. T. Cicero. This solemn date marks the end of national independence gloriously recovered by the Maccabees and the beginning of Roman domination in Judaea."

In my opinion other allusions are to the Asmonean High Priests AristObulus II (67-63 n.c.) and Hyrcanus 11 (63-40 s.c.). Our com- mentary therefore dates from the Roman period. The Roman conqueror is in fact directly described in several passages. In virtue of his allegorical interpretation, the commentator identifies the Chaldeans wherever they are mentioned in Habakkuk with the " Kittim," a national name which in this context must be applied to the Romans, as it is in Daniel xi, 3. There are references to the Romans' valour in combat, their thirst for domination, their brutality in war, their sublety and astuteness in diplomacy, their cult of their standards—the signa of the legions—their use of trophies, the annual tribute they exact from conquered peoples, finally the civil war between the great Roman leaders, i.e., that which began when Caesar crossed the Rubicon.

This final allusion to the civil war makes probable a date for the commentary not only after 63 B.C. but even after the Second Triumvirate which associated Octavius, Anthony and Lepidus in 43 s.c. The most probable date to my mind is about 41 s.c. At all events it is impossible any longer to accept a date in the second

century as proposed by some scholars, for the hiding of the manuscripts in the cave. The commentary informs us that the sect to which its author belonged was called " The New Covenant " ; that its founder the " Master of Justice "—also the Elect and the Messiah of God—was persecuted and cruelly tortured by the High Priest Aristobulus II ; that he will come again in the last days to judge the gentiles and Israel. The end of the world As imminent. Only those will be saved who have faith in the Master,

This is quite new information, all the more important because the commentary is nearly a century older than the earliest Christian writint% and the ministry of the Master of Justice must be placed between 100 B.c. and 65 or 63 B.C. The commentary provides the key to a mysterious document discovered in 1896. This had been produced by a sect called the " New Covenant of Damascus." The close relationship between this document and the commentary is striking in every respect—language, style and contents. The sibylline allusions of the so-called " Damascus Document " now

become clear. Somewhere about 65 dr 63 after the martyrdom of the founder of the sect, his followers took refuge in Damascus under a new leader symbolically called " the Star." It was at this time that the church of the New Covenant took the title " The New Covenant in the Land of Damascus." The seat of the sect must have been brought back to Palestine about the beginning of the reign of Herod the Great (37 B.c.).

At what moment were the scrolls hidden in the cave ? I think during the Great Jewish War, which ended, as is well known, with the capture of Jerusalem in A.D. 70. Fragments of Roman pottery of the first century A.D. there found in the cave. Frightened by the dangers of the times, the adherents of the " New Covenant " must have fled from their monasteries near the Dead Sea after hiding their

most precious possession, namely their library. •

Pliny the Ancient tells us that in his day (he died in A.D. 79) Jewish ascetics, the Essenes, were established at a short distance from the western shore of the Dead Sea. It now seems to me extremely probable that the adherents of the New Covenant can be identified with these Essenes. The Master of Justice, in the First decades of the first century B.C., while remaining strictly faith- ful to the Law and the Prophet§, would seem to have made the innovation Of introducing amongst the Essenes, and therefore into the Jewish world. something of the spirit, the dogmas and the organisation of the deo-Pythagorean communities. It was precisely at this moment that neo-Pythagoreanism began to spread through the entire Mediterranean world.

About the great Jewish teacher who suffered and died under Aristobulus H we knew hitherto nothing, not even that he existed. The commentary on Habakkuk brings us an extraordinary revelation, that of a Messiah whose return in glory was fervently awaited about a century before the Galilean Master appeared, the Messiah of the Christian faith. No one can overlook the importance of this discovery for the study of Jewish life and literature in the last century B.c. as well as for that of the origins of Christianity. Quite new perspectives are thus opened up for the historian, and unexpected light is cast on hitherto insoluble problems.