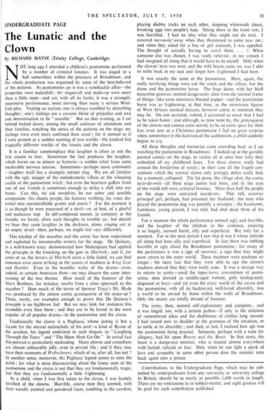 The Lunatic and the Clown

By RICHARD MAYNE (Trinity College, Cambridge) It is a familiar commonplace that laughter is often as not the first cousin to fear. Sometimes the fear produces the laughter, which bursts on us almost as hysteria—a sudden relief from some intolerable nervous tension. Sometimes—perhaps more commonly —laughter itself has a strangely sinister ring. We are all familiar with the ugly snigger of the melodramatic villain or the wheezing cackle of the pantomime witch ; but even the heartiest guffaw from one of our friends is sometimes enough to strike a chill into our bones. Can this, we ask ourselves, be our sober and sensible companion—his cheeks purple, his features writhing, his voice dis- torted into uncontrollable grunts and snorts ? For the moment it is as though he were possessed of a devil—or, at best, of a gleeful and malicious imp. In self-composed moods, in company at the fireside, we barely allow such thoughts to trouble us ; but should we hear that same laughter in the darkness, alone, ringing out in an empty street—then, perhaps, we might feel very differently.

This kinship of the macabre and the comic has been understood and exploited by innumerable writers for the stage. De Quincey, in a well-known essay demonstrated how Shakespeare had applied the principle in the knocking on the gate in Macbeth ; and if, for some of us, the terrors of Macbeth seem a little faded, we can find instances even more striking in the scenes of madness in King Lear and Hamlet. Even in the humbler walks of the drama—even, indeed, in certain American films—we may discern the same inter- twining of the two themes. How much of the humour of the Marx Brothers, for instance, results from a close approach to the macabre ? How much of the terror of Spencer Tracy's Mr. Hyde was produced by the almost comic grotesquerie of his make-up ? These, surely, are examples enough to prove that De Quincey's principle is no highbrow fad. But we may look for instances less recondite even than these ; and they are to be found in the most popular of all popular drama—in the pantomime and the circus.

Traditionally the clown is a Pagliacci, whose jesting is but a façade for the etet nal melancholy of his soul—a kind of Byron of the sawdust, his legend enshrined in such slogans as " Laughing Through the Tears " and " The Show Must Go On." In actual fact this portrait is particularly misleading. Many clowns and comedians are almost unbearably jolly, even in private life ; and if they, too, have their moments of Weltschmerz, which of us, after all, has not ? In another sense, moreover, the Pagliacci legend seems to miss the point ; for what is most disconcerting about the funny men of the pantomime and the circus is not that they are fundamentally tragic, but that they are fundamentally a little frightening.

As a child, when I was first taken to the circus, I was frankly terrified of the clowns. Horrible, coarse men they seemed, with their weirdly painted and powdered faces, tumbling in the sawdust, playing shabby tricks on each other, slopping whitewash about, breaking eggs into people's hats. Sitting there in the front row, I was horrified. I had no idea what they might not do next. I cowered nervously away when they threatened to come near me ; and when they asked for a boy or girl assistant, I was appalled. The thought of actually having to touch them. . . .! When someone else was chosen, I was vastly relieved ; in my conceit I had imagined all along that it would have to be myself. Only when the clowns' turn was over, and the wild beasts came on, was I able to settle back in my seat and forget how frightened I had been.

It was exactly the same at the pantomime. Here, again, the really terrifying things were not the witch and the villain, but the dame and the pantomime horse. The huge dame, with her bluff masculine gestures, seemed dangerously alien from the normal frame of things—like some enormous bloated puppet—and the pantomime horse was as frightening, at that time, as the monstrous figures of West African masked dancers, however comic in intention they may be. On one occasion, indeed, I screamed so much that I had to be taken home ; and although, as time went by, the grotesquerie of the clowns and comics came merely to be an extra spice for their fun, even now at a Christmas pantomime I feel no great surprise when, somewhere in the darkness of the auditorium, a child suddenly begins to cry.

All these thoughts and memories came crowding back as I sat watching the pantomime in Broadmoor. I looked up at the garishly painted comics on the stage, to realise all at once how fully they embodied all my childhood fears. For these clowns really had crossed the borderline of sanity ; in their case all the fragile con- ventions which the normal clown only jestingly defies really had, for a moment, collapsed. The fat dame, the village idiot, the comic ne'er-do-well—all these stage zanies had been, and in the eyes of the world still were, criminal lunatics. More than half the people on the stage were convicted murderers. That tall, scrawny principal girl, perhaps, had poisoned her husband ; the man who played the pantomime dog was possibly a strangler ; the handsome, fastidious, young pianist, I was told, had shot dead three of his friends.

For a moment the whole performance seemed ugly and horrible, and the laughter of the children in the audience, enjoying it so hugely, seemed harsh, silly and superficial. But only for a moment. For in the next instant I saw that it was I whose attitude all along had been silly and superficial. In fact there was nothing horrible or ugly about the Broadmoor pantomime ; for many of the performers it was a sign of recovery, a sign that they might soon return to the outer world. These madmen were madmen no longer ; the mere fact that they were able to ape the clown's madness showed that they were really sane. It was a strange way to return to sanity—amid the topsy-turvy conventions of panto- mime, men dressed as middle-aged women, girls inadequately disguised as boys—and yet even the crazy world of the circus and the pantomime, with all its hackneyed, well-loved absurdity, was a world to be envied by those within the walls of Broadmoor. Only the insane are totally devoid of humour.

The irony, then, seemed self-explanatory and complete ; and it was tinged, too, with a certain pathos—if only in the staleness of remembered jokes and the shabbiness of clothes long unused. I had ceased now to shudder at the grimness of the situation, or to smile at its absurdity ; and then, at last, I realised how apt was the pantomime being enacted. Someone, perhaps with a taste for allegory, had hit upon Beauty and the Beast. In that story, the beast is a dangerous monster, who is treated almost everywhere with hatred, ridicule or fear. Only when he can light a spark of love and sympathy in some other person does the monster turn back again into a prince.