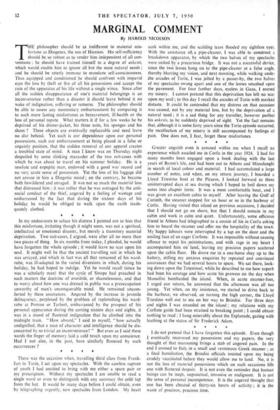 THE philosopher should be as indifferent to material mis- fortune as Diogenes, the son of Hicesias. His self-sufficiency should be so robust as to render him independent of all con- ventions ; he should have trained himself to a degree of askesis, which would enable him to ignore all but the most natural needs ; and he should be utterly immune to mundane self-consciousness. Thus equipped and conditioned he should confront with impavid eyes the loss by theft or fire of all his possessions and accept the ruin of the apparatus of his life without a single wince. Since after all the sudden disappearance of one's material belongings is an inconvenience rather than a disaster it should leave behind it no wake of indignation, suffering or remorse. The philosopher should be able to assess any momentary embarrassment by comparing it to such more lasting misfortunes as bereavement, ill-health or the loss of personal repute. What matters it if for a few weeks he be deprived of his dinner-jacket, his three suits, his sponges and his shoes ? These objects are eventually replaceable and need leave no slur behind. Yet such is our dependence upon our personal possessions, such our embarrassment at being placed in a false or ungainly position, that the sudden removal of our apparel creates a troubled state of mind. A man I know was on Thursday night despoiled by some slinking marauder of the two suit-cases with which he was about to travel on his summer holiday. He is a resolute and eupeptic man, endowed with a good war record and no very acute sense of possession. Yet the loss of his luggage did not arouse in him a Diogenic mood ; on the contrary, he became both bewildered and enraged. It was not so much the material loss that distressed him ; it was rather that he was outraged by the anti- social conduct of the thief, angered by a feeling of wastage and embarrassed by the fact that during the sixteen days of his holiday he would be obliged to walk upon the earth inade- quately clothed.

In my endeavours to solace his distress I pointed out to him that this misfortune, irritating though it might seem, waa not a spiritual, intellectual or emotional disaster, but merely a transitory material deprivation. Two suit-cases, I argued, were after all no more than two pieces of thing. In six months from today, I pleaded, he would have forgotten the whole episode ; it would leave no scar upon his soul. It might well be that the ancient travelling suit in which he was arrayed, and which in fact was all that remained of his ward- robe, was ill-adapted to the varied diversions in which, during his holiday, he had hoped to indulge. Yet he would recall (since he was a scholarly man) that the cynic of Sinope had preached in such matters the doctrine of anaideia, or shamelessness, and that to worry about how one was dressed in public was a preoccupation unworthy of man's unconquerable mind. He remained uncom- forted by these assurances. Angered by the increase in juvenile delinquency, perplexed by the problem of replenishing his ward- robe at Portree or Tarbert, embarrassed by the prospect of his personal appearance during the coming sixteen days and nights, it was in a mood of flustered indignation that he climbed into the midnight train. " How absurd," I said to myself, " how actually undignified, that a man of character and intelligence should be dis- concerted by so trivial an inconvenience! " But even as I said these words the finger of memory laid a cold touch upon my conscience. Had I not also, in the past, been similarly flustered by such occurrences ?

* * * * There was the occasion when, travelling third class from Frank- furt to Turin, I sat upon my spectacles. With the careless rapture of youth I had omitted to bring with me either a spare pair or my prescription. Without my spectacles I am unable to read a single word or even to distinguish with any accuracy the cold tap from the hot. It would be many days before I could obtain, even by telegraphing urgently, new spectacles from London. My heart

sank within me, and the scalding tears flooded my sightless eyes. With the assistance, ofk a pipe-cleaner, I was able to construct a breakdown apparatus, by which the two halves of my spectacles were united by a precarious bridge. It was not a successful device, since the two lenses hung on to the pipe-cleaner at a false angle, thereby blurring my vision, and next morning, while walking under the arcades of Turin, I was jolted by a passer-by, the two halves of my spectacles swung apart and one of the lenses smashed upon the pavement. For four further days, eyeless in Gaza, I nursed my misery. I cannot pretend that this deprivation has left no scar upon my soul ; to this day I recall the arcades of Turin with marked distaste. It could be contended that my distress on that occasion was caused, not by any material loss, but by the deprivation of a natural need ; it is a sad thing for any traveller, however perfect his askesis, to be suddenly deprived of sight. Yet the fact remains that, although it is some forty years since the Turin episode occurred, the recollection of my misery is still accompanied by feelings of pain. One does not, I fear, forget these misfortunes.

Greater anguish even is aroused within me when I recall an experience which assailed me in Corfu in the year 1924. I had for many months been engaged upon a book dealing with the last years of Byron's life, and had been out to Athens and Missolonghi in search of local colour and material. I had accumulated a large number of notes, and when, on my return journey, I boarded a Lloyd Triestino boat at the Piraeus, I looked forward to three uninterrupted days at sea during which I hoped to boil down my notes into chapter form. It was a most comfortable boat, and I was given an excellent cabin to myself After leaving the Gulf of Corinth, the steamen, stopped for an hour or so in the harbour of Corfu. Having visited that island on previous occasions, I decided that I should not go on shore, but that I should remain in my cabin and work in calm and quiet. Unfortunately, some officious friend in Athens had telegraphed to a cousin of his in Corfu asking him to board the steamer and offer me the hospitality of the town. My happy labours were interrupted by a tap on the door and the smiling face of an eager Corfiote. It was impossible without causing offence to reject his ministrations, and with rage in my heart I accompanied him on land, leaving my precious papers scattered upon the cabin floor. He drove me in a one-horse shay up to the battery, stilling my anxious enquiries by repeated and convinced assurances that we had several hours to spare. We sat there, look- ing down upon the Toteninsel, while he described to me how superb had been his courage and how acute his prowess on the day when Mussolini bombarded the island. When, in acute steamer-fuss, I urged our return, he answered that the afternoon was all too young. Yet when, on my insistence, we started to drive back to the harbour, we observed, on turning the high corner, the Lloyd Triestino well out to sea on her way to Brindisi. For three days and nights I was stranded on the island ; my relations with my Corfiote guide had been strained to breaking point ; I could obtain nothing to read ; I hung miserably about the Esplanade, gazing with loathing at the statue of Sir Frederick Adam.

I do not pretend that I have forgotten this episode. Even though I eventually recovered my possessions and my papers, the very thought of that marooning brings a stab of angered pain. In the end I crossed to Italy in a small and verminous Greek steamer ; as a final humiliation, the Brindisi officials insisted upon my being crudely vaccinated before they would allow me to land. No, it is not the loss of material possessions which on such occasions fills one with flustered despair. It is not even the reminder that human beings can be inept, unpunctual, intrusive or malignant. It is not the sense of personal ,incompetence. It is the angered thought that one has been cheated of thirty-six hours of activity ; it is the waste of precious, precious time.