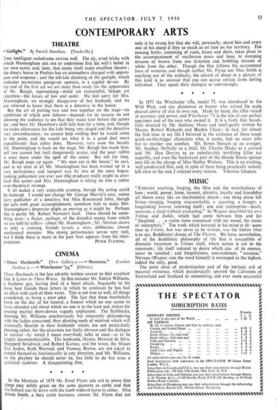 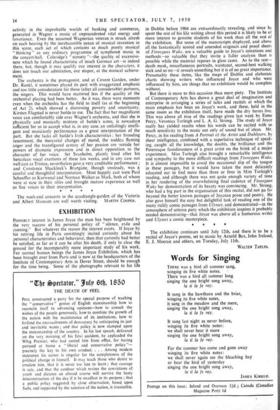 MUSIC " ENDLESS yearning, longing, the bliss and the wretchedness

of love world, power, fame, honour, chivalry, loyalty and friendship all blown away like an insubstantial dream ; one thing alone left living—longing, longing unquenchable, a yearning, a hunger, a languishing forever renewing itself ; one sole redemption—death, surcease, a sleep' without awakening." So Wagner described his own Tristan and lsolde, which had come between him and his " Siegfried . . . a realm more consonant with my mood, the realm of melancholy." The work which hovered in his mind at th^ same time as Tristan, but was never to be written, was the Indian (that is to say, Buddhistic) drama of The Victors. We have, nevertheless, all of the Buddhistic philosophy of life that is susceptible of dramatic treatment in Tristan itself, where action is cut to the minimum ; life itself reduced to desire which can of its essence, never be satisfied ; and forgetfulness, non-existence, " surcease," Nirvana (Wagner uses the word himself) is envisaged as the highest, indeed the only, good.

The same ideas of predestination and of the intrinsic evil of material .existence, which paradoxically spurred the Calvinists of Switzerland and Scotland to unremitting and ever more successful

activity in the improbable worlds of banking and commerce, generated in Wagner a music of unprecedented vital energy and luxuriance. Even the seasoned Wagnerian veteran is struck afresh on each hearing by the inexhaustible ocean of musical invention in this score, each act of which contains as much purely musical " thinking " as any ordinary programme of symphonic music in the concert-hall. Coleridge's " nimiety "—the quality of excessive- ness which he found characteristic of much German art—is indeed there, but, though it may qualify our interest in the characters, it does not touch our admiration, our stupor, at the musical achieve- ment.

The orchestra is the protagonist, and at Covent Garden, under Dr. Rankl, it sometimes played its part with exaggerated emphasis and too little consideration for those (after all considerable) partners, the singers. This would have mattered less if the quality of the orchestral playing had been better. As it was, there were moments even when the orchestra has the field to itself (as at the beginning of Act 2), which showed a distressing poverty and uncertainty. Kirsten Flagstad is never Isolde to me. The fact that her magnificent voice can comfortably ride over Wagner's orchestra, and that she is physically and musically mistress of lsolde's notes, is nowadays sufficient for us to accept what is, in any case, an unfailingly intelli- gent and musicianly performance as a great interpretation of the part. But she lacks all Isolde's Irish characteristics ; her brooding resentment, the mercurial changes of mood, the sudden flaming anger and the transfigured ecstasy of her passion are outside her powers of dramatic expression and in direct opposition to the character of her voice. Set Svanholm, plainly tired after his herculean vocal exertions of these last weeks, and in any case not well cast as Tristan, nevertheless gave a very creditable performance ; and Constance Shacklock's Brangane, though unsteady, was a careful and thoughtful interpretation. Most happily cast were Paul Schoeffier as Kurwenal and Norman Walker as Mark, both of whom were at ease in their roles and brought mature experience as well -as fine voices to their interpretation.

The week-end concerts in the quadrangle-garden of the Victoria and Albert Museum are well worth visiting. MARTIN COOPER.