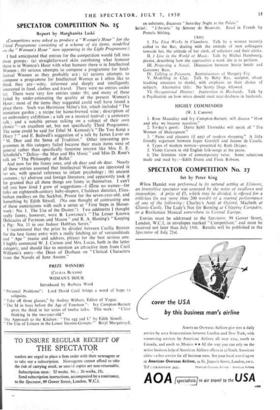 tCompetitors were asked to produce a " Woman's Hour" for the Third Programme consisting of a scheme of six items, modelled on the " Woman's Hour " now appearing in the Light Programme.)

I had anticipated that entries for the competition would fall into three groups: (a) straightforward skits combining what humour there is in Woman's Hour with what humour there is in Intellectual Women (b) serious attempts to compose a pfogramme for Intel- lectual Women as they probably are ; (c) serious attempts to compose a programme for Intellectual Women as I often like to think they are—witty, informed and deeply and intelligently interested in food, clothes and travel. There were no entries under

(c). There were very few entries under (b), and many of these failed by under-estimating the quality of the present Woman's Hour ; most of the items they suggested could well have found a place there. Such was Hermione Milne's list, which included "The miniature garden ; a recipe for home-brewed wine ; description of an embroidery exhibition ; a talk on a musical festival ; a centenary talk ; and a notable person talking on a subject of their own choice "—an excellent set, but not specifically Third Programme. The same could be said for Ethel M. Kennedy's " Do You Keep a Diary ? " and E. Bedwell's suggestion of a talk by James Laver on " M. Dior and the Sense of Tradition." Other interesting pro- grammes in this category failed because their main items were of general rather than specifically feminine interest like Mrs. E. E. Schofield's " Delius—the Man and His Music " and Miss D. Rose's talk on " The Philosophy of Ballet."

And now for the funny ones, and oh dear and oh dear. Nearly all these entries assumed that Intellectual Women are interested in (a) sex, with special reference to infant psychology ; (b) ancient customs ; (c) abstruse and foreign literature, and apparently took it for granted that all these things are funny in themselves. I can't tell you how tired I grew of suggestions—I name no names—for talks on eighteenth-century baby-diapers, Chaldean dietetics, Eliza- bethan medleys on the Sackbut, Proust for the seven-year-old, and Something by Edith Sitwell. (No one thought of contrasting one of these esotericisms with such a series as " First Steps in House- work: No. 1. The Use of the Duster.") Two oddments I thought really funny, however, were B. Lawrence's " The Lesser Known Delicacies of Fortnum and Mason " and R. A. Hasting's " Keeping a Pig: No. 11 in our Indoor Hobbies Series." I recommend that the prize be divided between Cecilia Buxton for the best funny entry•with a really fetching air of verisimilitude and " Ape " (name and address, please) for the best serious one. I highly commend W. J. Carson and Mrs. Lucas, both in the latter category, and should like to mention an attractive item from Cecil Williams's entry—the Dean of Durham on " Clerical Characters from the Novels of Jane Austen."

"Take off those glasses," by Audrey Withers, Editor of Vogue.

"The id in boys before the Age of Fourteen ": Ivy Compton-Burnett gives the third in her series of twelve talks. This week : " Clear thinking in the two-year-old."

The Approach to the Kitchen: The egg and I." by Edith Sitwell. "The Use of Leisure in the Lower Income-Groups:" Beryl Murgatroyd,

an usherette, discusses "Saturday Night at the Palais."

1. The First Weeks in Chambers. Talk by a woman recently called to the Bar, dealing with the attitude of men colleagues towards her, the attitude of her clerk, of solicitors and their clerks.

H. l Live in the World of Music. Talk by Michal Hambourg, pianist, describing how she approaches a work she is to perform.

IV. Talking to Prisoners. Reminiscences of Margery Fry. V. Modelling in Clay. Talk by Betty Rea, sculptor, about teaching amateurs to model, with emphasis on their choice of subjects. Alternative title: No Scotty Dogs Allowed.

VI. Occupational Disease: Inattention in Husbands. Talk by a Psychiatrist on how wives should meet near-deafness in husbands.

HIGHLY COMMENDED (W. J. CARSON) 1. Rose Macaulay and Ivy Compton-Burnett, will discuss " How and why we became novelists."

2. To-day's guest : Dame Sybil Thorndike will speak of " The Women of Shakespeare."

3. " Pains and pleasure (if any) of modern shopping." A little friendly argument between Joyce Grenfell and Jeanne de Casalis.

5. Violet Carson in old English folk-songs at the piano.

6. The feminine view of contemporary verse. Some selections made and read by:—Edith Evans and Flora Robson.