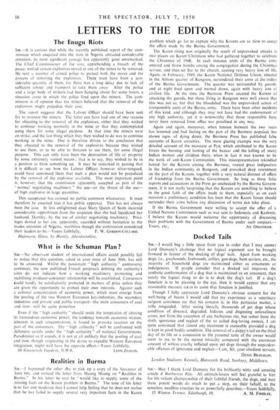 What is the Schuman Plan?

SIR,—No observant student of international affairs could possibly fail to notice that this question, asked in your issue of June 30th, has still to be answered. Whilst the passionate "high authority" controversy continues, the now published French proposals defining the authority's aims do not indicate how a working machinery promoting and stabilising producer-consumer relationship will be established. Consumers could hardly be satisfactorily protected in matters of price unless they are given the opportunity to protect their own interests. Against such a colossal concentration of economic power, which must emerge from the pooling of the two Western European key-industries, the secondary industries and private and public transport—the main consumers of coal and iron—will be quite powerless.

Even if the " high authority " -should resist the temptation of abusing its tremendous economic power, the tendency towards economic statism, inherent in such concentrations, is bound to provoke reaction on the part of the consumers. The " high authority " will be confronted with defensive cartels under the " high authority" of national Governments. Paradoxical as it sounds, it is not at all unlikely that the pooling of coal and iron, though originating in the desire to expedite Western European integration. might well have the opposite effect.—Yours faithfully,