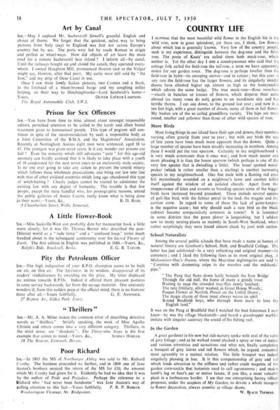 Most living things in our island have their ups and downs, their numbers varying often greatly from year to year ; but with our birds the ups of late years have been much more apparent than the downs. Quite a large number of species have been steadily increasing in numbers. Among these I would put the tree, sparrow. Certainly in my neighbourhood it is very much commoner than it once was ; and how much neater and more pleasing it is than the house sparrow (which perhaps is one Of the very few species that is dwindling a little). The lesser spotted wood- pecker (which is rather smaller than a starling) is another increasing species in my neighbourhood. One fine male with a flaming red crest fell mysteriously wounded on a neighbour's lawn and another killed itself against the window of an isolated church., Apart from the reappearance of kites and avocets as breeding species some of the bigger birds have increased beyond precedent. These include several species of gull-like bird, with the fulmar petrel in the lead, the magpie and the carrion crow. In regard to some of these the lack of game-keepers is the negative cause ; but why should such a rare bird as the black redstart become comparatively common in towns? It is lamented in some districts that the green plover is languishing, but I seldom saw so many nesting-places as recently in South-West Scotland, where rather surprisingly they were found almost cheek by jowl with curlew.