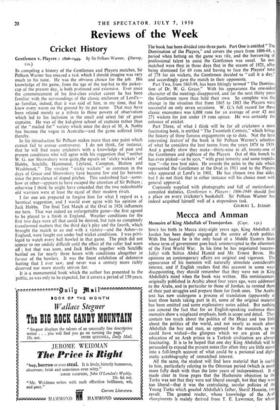 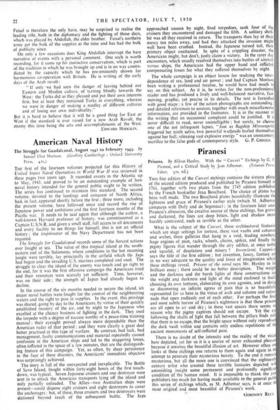 SINCE his birth in Mecca sixty-eight years ago, King Abdullah of Jordan has been deeply engaged at the centre of Arab politics. With Ibn Saoud he is the only head of a Middle Eastern State whose term of government goes back uninterrupted to the aftermath of the First World War. In his time he has negotiated (success. fully) with Sultan Abdul Hamid and Mr. Ernest Bevin. His opinions on contemporary affairs are original and vigorous. The appearance of his memoirs will naturally stimulate considerable interest, and if English readers find this account in some ways disappointing, they should remember that they were not in King Abdullah's mind when the book was written. His reminiscences, originally published in Arabic about four years ago, were addressed to the Arabs, and 'in particular to those of Jordan, to remind them of their past struggles and prepare them for fresh ones. The Arabic text has now undergone a process of translation (apparently at least three hands taking part in it), some of the original material has been omitted and some explanatory notes added. But nothing can conceal the fact that for an English-speaking audience these memoirs show a misplaced emphasis, both in scope and detail. They contain too much about the politics of the Hejaz and too little about the politics of the world, and not nearly as much about Abdullah the boy and man, as opposed to the monarch, as we could have wished—the glimpses which we are given of the education of an Arab prince in a Turkish civilisation are always fascinating. It is to be hoped that one day King Abdullah will be persuaded to expand the present notes (for often they are little more) into a full-length account of what could be a personal and diplo- matic autobiography of unmatched interest.

All the same, the student will find here material that is useful to him, particularly relating to the Ottoman period (which is much more fully dealt with than the later years of independence). It is made clear in these pages that the Hashemite objection to the Turks was not that they were not liberal enough, but that they were too liberal—that it was the centralising, secular policies of the Young Turks which goaded Abdullah's father, Sherif Hussein, into revolt. The general reader, whose knowledge of the Arab rlsorgimento is mainly derived from T. E. Lawrence, for whom Feisal is therefore the only hero, may be surprised to realise the leading role, both in the diplomacy and the fighting of those days, which was played by Abdullah, the elder brother. Feisal's northern army got the bulk of the supplies at the time and has had the bulk of publicity since.

On only a few occasions does King Abdullah interrupt the bare narrative of events with a personal comment. One such is worth recording, for it sums up his instinctive conservatism, which is part of the tradition in which he was brought up and is in no way contra- dicted by the capacity which he has pre-eminently shown for harmonious co-operation with Britain. He is writing of the early days of the Arab revolt: If only • we had seen the danger of leaving behind our Eastern and Muslim culture, of turning blindly towards the West: the Turks did as they pleased and put their own interests first, but at least they remained Turks in everything, whereas we were in danger of making a medley of different cultures and of losing our own individuality."

But it is hard to believe that it will be a good thing for East or West if the standard is ever raised for a new Arab Revolt, the enemy this time being the arts and accomplishments of the West.