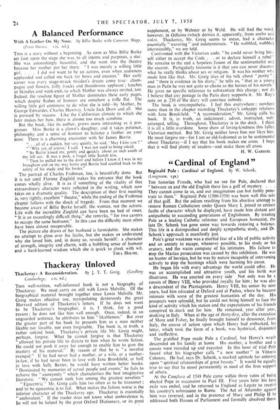 THIS well-written, well-informed book is not a biography of Thackeray. We must carry on still with Lewis Melville. Of the biographical material brought together since Lewis Melville. Mr. Greig makes effective use, manipulating dexterously the great Harvard edition of Thackeray's letters. If he does not want to be Thackeray's biographer, it is, I think, for a good reason ; he does not like him well enough. Once, indeed, in an unguarded sentence, he attributes to him " likableness." But over the greater part of his book he presents him as a man neither likable nor lovable, nor even forgivable. The book is, in truth, a rather unkind book. Thackeray's private life Mr. Greig might, perhaps, forgive. What he cannot forgive is that Thackeray

allowed his private life to dictate to him when he wrote fiction. He could not push it away far enough to enable him to gain the mastery of his material." By reason of that he is " a novelist manqué." If he had never had a mother, or a wife, or a mother- in-law, if he had never been in love with Jane Brookfield, or half in love with Sally Baxter, he would have written better books. " Dominated by memories of actual people and events," he fails to achieve the " anonymity " which characterises the best imaginative literature. " We cannot rank him among the greatest novelists" " Egocentric " Mr. Greig calls him (so often as to be tiresome) ; and to be egocentric is to fail. What makes the failure worse is the inferior character of the Thackeray ego. Thackeray is essentially "ambivalent." If the reader does not know what ambivalence is, he will not be helped by the great Oxford Dictionary, or its great

supplement, or by Webster or by Wyld. He will find the word, however, in Odhams (which derives it, apparently, from ambo and volo). Thackeray, Mr. Greig seems to mean, had a character

essentially " wavering " and indeterminate. He wobbled, wobbled interminably," we are told.

Confronted with the Victorian code, " he could never bring him. self either to accept the Code . . or to declare himself a rebel." He remains to the end a hopeless fusion of the sentimentalist and the sneerer. PartiFularly tiresome is it that you can never discover what he really thinks about sex or religion. It was his mother who made him like that. Mr. Greig tires of his talk about " purity "; and " there is evidence in his diary," he tells us, " that as a young man in Paris he was not quite so chaste as the heroes of his novels." He gives no specific reference to substantiate this charge ; nor do I believe that any passage in the Paris diary supports it. Mr. Ray's note on p. 230 orthe diary will convince nobody.

The book is unsympathetic. I feel this everywhere ;. nowhere more than in the chapter recording Thackeray's unhappy relations with Jane Brookfield. " A reconsideration," Mr. Greig calls his book. It is, in truth, an indictment ; adroit, instructed, well- arranged, telling. Throughout, Thackeray is in the dock. I think it is all a little overdone. Some show of loving-kindness this fallen Victorian merited. But Mr. Greig neither loves him nor likes him. He must forgive me—for I am so old-fashioned as to be sentimental about Thackeray—if I say that his book makes me cross. 1 hope that it will find plenty of readers—and make them all cross.