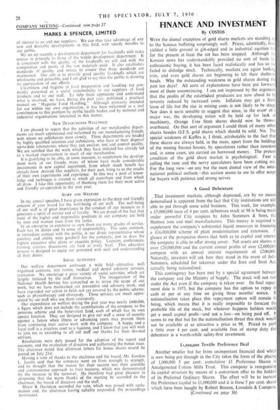 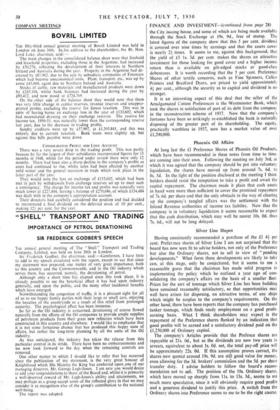 WITH the dismal exception of gold shares markets are standin3 to to the Korean buffeting surprisingly well. Prices, admittedly, have yielded a little ground in gilt-edged and in industrial equities but for the present at least the rot has been stopped. Although the Korean news has tiaderstandably provided no sort of basis for enthusiastic buying, it has been faced realistically and has so far failed to dislodge stock. Technically, markets are again looking trim, and even gold shares are beginning to lift their sheltered heads. Why the outstanding weakness in gold shares during the past ten days? All sorts of explanations have been put forward, most of them unconvincing. I am not impressed by the argument that the profits of the established producers are now about to be severely reduced by increased costs. Inflation may get a fresh lease of life but the rise in mining costs is not likely to be steep. Nor does it seem sensible to suggest that since, in the event of a major war, the developing mines will be held up for lack of machinery, Orange Free State shares should now be thrown overboard. On that sort of argument I could think of many other shares besides 0,F.S. gold shares which should be sold. No. The special weakness of Kaffirs is, I think, attributable to the fact that these shares are always held, in the main, apart from the holdings of the mining finance houses, by speculators rather than investors and, in some cases, are carried on borrowed money. The present condition of the gold share market is psychological. Fear is calling the tune and the nervy speculators have been cutting out. For the long view—on any but the most dismal view of the inter- national political outlook—this section seems to me to offer scope for buyers with patience and strong nerves.

That investment markets, although depressed, are by no means demoralised is appM-ent from the fact that City institutions are stilt able to put through some solid business. This week, for example, a £5,000,000 issue of 4 per cent. debenture stock at 98 is being made under powerful City auspices by John Summers & Sons, the Shotton iron and steel manufacturers. This money is required to supplement the company's substantial liquid resources in financing a £16,000,000 scheme of plant modernisation and extension. 21 glance at the prospectus shows that both as to capital and interest the company is able to offer strong cover. Net assets are shown at over £20,000,000 and the current annual profits of over £2,000,000 compare with an annual interest requirement of £200,000. Naturally, investors will ask how they stand in the event of John Summers, scheduled for takeover under the Iron and Steel Act, actually being nationalised.

This contingency has been met by a special agreement between the company and .the Ministry of Supply. The stock will not vest under the Act even if the company is taken over. Its final repay- ment date is 1975, but the company has the option to repay in cash at par at any time on giving three months' notice. If nationalisation takes place this repayment option will remain in being, which means that it is really impossible to forecast the probable life of the stock, but whatever happens holders would get a small capital profit—and not a loss—on being paid off. It seems to me that but for the nationalisation threat this stock would not be available at so attractive a price as 98. Priced to yield a little over 4 per cent. and available free of stamp duty this debenture is a worth-while safety-first investment.

Another smaller but far from unimportant financial deal which is now being put through in the City takes the form of the placing of 1,000,000 5 per cent. cumulative £1 Preference Shares in Amalgamated Cotton Mills Trust. This company is reorganising its capital structure by means of a conversion offer to the holders of its Preferred Ordinary -Shares. The effect will be to increase the Preference capital to £1,000,000 and it is these 5 per cent. shares which have been bought by Robert Benson, Lonsdale & Company, (Continued on page 30) FINANCE AND INVESTMENT—(continued from page 28) the City issuing house, and some of which are being made available through the Stock Exchange at 19s. 9d., free of stamp. The latest figures of the company show that this 5 per cent. dividend is covered over nine times by earnings and that the assets cover is nearly 21 times. It seems to me, against this background, that the yield of £5 Is. 3d. per cent. makes the shares an attractive investment for those looking for good cover and a higher income return than is available on gilt-edged stocks 9r good-class debentures. It is worth recording that the 5 per cent. Preference Shares of other textile concerns, such as Fine Spinners, Calico Printers and Bradford Dyers, are priced to yield approximately 41 per cent., although the security as to capital and dividend is no stronger.

It is an interesting aspect of this deal that the seller of the Amalgamated Cotton Preferences is the 'Westminster Bank, which took the shares in satisfaction of part of its debt from the company in the reconstruction scheme of 1937. Now that the company's fortunes have been so strikingly re-established the bank is naturally disposing of the greater part of its shareholding. The equity, practically worthless in 1937, now has a market value of over £1,200,000.

Phoenix Oil Affairs At long last the £1 Preference Shares of Phoenix Oil Products, which have been recommended in these notes from time to time, are coming into their own. Following the meeting on July 3rd, at which it was agreed that the company should be put into voluntary liquidation, the shares have moved up from around 7s. 6d. to 8s. 3d. In the light of the position disclosed at the meeting I think holders should resist the temptation to take a profit and await the capital repayment. The chairman made it plain that cash assets in hand were more than sufficient to cover the promised repayment of 7s. 6d. per share and that the only obstacle in the way of clearing up the company's tangled affairs was the settlement with the Inland Revenue authorities of income tax liability. Now that the company is in voluntary liquidation it seems reasonable to expect that the cash distribution, which may well be nearer 10s. Od. than 7s. 6d., will n9t be long delayed.

Silver Line Hopes Having consistently recommended a purchase of the £1 41 per cent. Preference shares of Silver Line I am not surprised that the board has now seen fit to advise holders, not only of the Preference but also the Ordinary shares, not to sell in view of " pending developments." What form these developments are likely to take can, at this stage, only be conjectured, but it seems to me a reasonable guess that the chairman has made solid progress in implementing the policy which he outlined a year ago of con- solidating the company's affairs on the basis of a smaller fleet. Prices for the sort of tonnage which Silver Line has been building have remained reasonably satisfactory, so that opportunities may well have arisen for disposing, on attractive terms, of any ships which might be surplus to the company's requirements. On the other hand, there have been reports that the company has purchased tanker tonnage, which finds ready employment on a good profit- earning basis. What I think shareholders may expect is the repayment of the Preference shares flanked by an indication. that good profits will be earned and a satisfactory dividend paid on the £1,250,000 of Ordinary capital.

The company's Articles provide that the Prefence shares are repayable at 21s. Od., but as the dividends are now two years in arrears, equivalent to about ls. Od. net, the total pay-off price will be approximately 22s. Od. If this assumption proves correct, the shares now quoted around 19s. 9d. are still good value for money, even allowing for the 3d. brokers' commission and the 5d. per share transfer duty. I advise holders to follow the board's recom- mendation not to sell. The position of the 10s. Ordinary shares, which have moved up sharply from 1 Is. to 13s. 3d., seems to me much more speculative, since it will obviously require good profits and a generous dividend to justify this price. A switch from the Ordinary shares into Preference seems to me to be the right course.