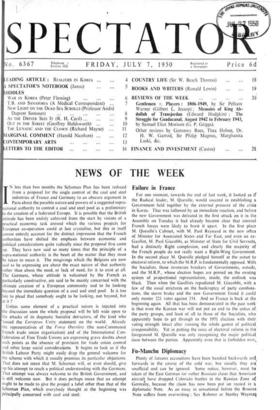 IN less than two months the Schuman Plan has been reduced from a proposal for the single control of the coal and steel industries of France and Germany to an obscure argument in Paris about the possible nature and powers of a suggested supra- ational authority to control a coal and steel pool as a preliminary o the creation of a federated Europe. It is possible that the British ttitude has been unduly coloured from the start by visions of a

tactical economic task around which the various projects for European co-operation could at last crystallise, but this in itself annot entirely account for the distinct impression that the French authorities have shifted the emphasis between economic and political considerations quite radically since the proposal first came up. They haVe now said so many times that the principle of a supra-national authority is the heart of the matter that they must be taken to mean it. The misgivings which the Belgians are now said to be expressing are about the exact nature of that authority rather than about the need, or lack of need, for it to exist at all. The Germans, whose attitude is welcomed by the French as particularly constructive, are said to be mainly concerned with the ultimate creation of a European community and to be looking beyond the immediate question of a coal and steel pool. Is it too late to plead that somebody ought to be looking, not beyond, but at it ?

Unless some element of a practical nature is injected into the discussion soon the whole proposal will be left wide open to the attacks of its dogmatic Socialist detractors, of the kind who loosed the European Unity statement on the world. Already the representatives of the Force Ouvriere (the non-Communist French trade union organisation) and of the International Con- federation of Free Trade Unions are expressing grave doubts about such points as the absence of provision for trade union control and other large social considerations. It begins to look as if the British Labour Party might easily drop the general welcome for the scheme with which it usually premises its particular objections. That does not mean that M. Schuman will, or even should, give up his attempt to reach a political understanding with the Germans. That attempt was always welcome to the British Government, and is still .welcome now. But it does perhaps mean that an attempt ought to be made to give the project a label other than that of the Schuman Plan, which everybody thought at the beginning was principally concerned with coal and steel.