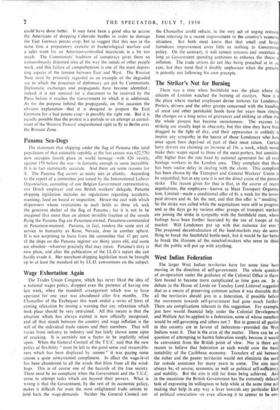 The Striker's Not for Burning

There was a time when Smithfield was the place where th citizens of London watched the burning of martyrs. Now it the place where market employees devise tortures for Londoner Porters, drivers and the other groups concerned with the handlin of meat and other perishable foods have for years been ringin the changes on a long series of grievances and striking so often tha the whole process has become monotonous. The excuses for striking are usually kept in obscurity, but this time they have been dragged to the light of day, and their appearance is unlikely to inspire any sympathy in the hearts of those Londoners who have once again been deprived of part of their meat ration. Certain lorry drivers are claiming an increase of 19s. a week, which woul make their wages equal to those of the meat-porters, but consider. ably higher than the rate fixed by national agreement for all road haulage workers in the London area. They complain that there has been undue delay in dealing with the claim. This complain has been shown by the Transport and General Workers' Union to be unjustified, but in any case it is not the direct cause of the present strike. The reason given for that is that, in the course of recent negotiations, the employers—known as Meat Transport Organisa tion, Limited—made a conditional offer of 8s. a week for the lower paid drivers and 4s. for the rest, and that this offer is " insulting." So the strike was called while the negotiations were still in progress, and as the days go by various other groups of transport workers are joining the strike in sympathy with the Smithfield men, whose feelings have been further lacerated by the use of troops at the market. Will Londoners put up with this nuisance for ever ? The proposed decentralisation of the food-markets may do some- thing to break the Smithfield bottle-neck, but it would be far better to break the illusions of the mischief-makers who seem to think that the public will put up with anything.