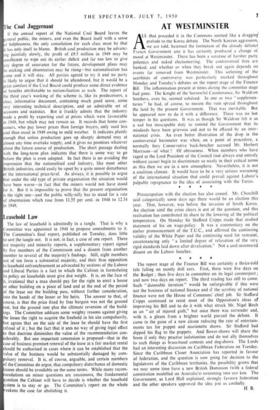 L L that preceded it in the Commons seemed like a

dragging prelude to the Korea debate. The North Korean aggression,

we are told, hastened the formation of the already defunct Frencn Government anu it has certainly produced a change of mood at Westminster. There has been a surcease of harsher party polemics and naked electioneering. The controversial fires are banked, and whether or when they break out again depends on events far removed from Westminster. This softening of the acerbities of controversy was particularly marked throughout Monday and Tuesday's debates on the report stage of the Finance Bill. The inflammation present at times during the committee stage

had gone. The Knight of the Sorrowful Countenance, Sir Waldron Smithers, even he, seemed subdued. in one or two " supplemen- taries " he had, of course, to mourn the ruin spread throughout the land by the present Government. That was inevitable. But he appeared now to do it with a 'difference. There was no hot temper in his questions. It was as though Sir Waldron felt it as a sad but inescapable duty to remind the Government that its misdeeds have been grievous and not to be effaced by an inter- national crisis. An even better illustration of the drop in the controversial barometer was when, on a point of procedure, a normally fiery Conservative back-bencher accused Mr. Herbert Morrison—of what ? Of obtuseness. When members who have raged at the Lord President of the Council (not always and entirely without cause) begin to discriminate so nicely in their critical terms as this then we are in a new atmosphere. Nevertheless, it is not a coalition climate. It would have to be a very serious worsening of the international situation that could prevail against Labour's palpable repugnance to the idea of associating with the Tories.

* * * * Preoccupation with the election has also ceased. Mr. Churchill said categorically some days ago there would be an election this year. That, however, was before the invasion of South Korea. An election until the crisis clears is out of the question, and this realisation has contributed its share to the lowering of the political temperature. On Monday Sir Stafford Cripps made that studied statement of his on wage-policy. It was a commentary on the earlier pronouncement of the T.U.C., and affirmed the continuing validity of the White Paper and the continuing need for restraint, countenancing only " a limited degree of relaxation of the very rigid standards laid down after devaluation." Not a soul murmured dissent on the Labour benches.

* * * The report stage of the Finance Bill was certainly a thrice-told tale falling on mostly dull ears. First, there were five days on the Budget ; then five days in committee on its legal counterpart ; and now two days on report. The third reading has still to come. Such " damnable iteration " would be unforgivable if this were not the business of hational finance and if the scrutiny of national finance were not the House of Commons' chief job. Sir Stafford Cripps continued to resist most of the Opposition's ideas of improving his Bill and to do it with what struck Mr. Nigel Birch as an " air of injured guilt," but once there was surrender and, with it, a gleam from a brighter world pierced the debate. It came in the guise of a new clause reducing the rate of entertain- ments tax for puppet and marionette shows. Sir Stafford had dipped his flag to the puppets. And flower-shows will share the boon if only they practise isolationism and do not ally themsellies to such things as brass-band contests and dog-shows. The Lords had an interesting discussion on Caribbean Federation on Tuesday. Since the Caribbean Closer Association has reported in favour of federation, and the question is now going for decision to the legislatures of the Caribbean territories, the possibility grows that we may some time have a new British Dominion (with a federal constitution modelled on Australia's) swimming into our ken. The Government, as Lord Hall explained, strongly favours federation and the other speakers approved the idea just as cordially.