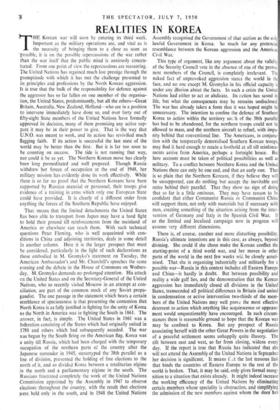 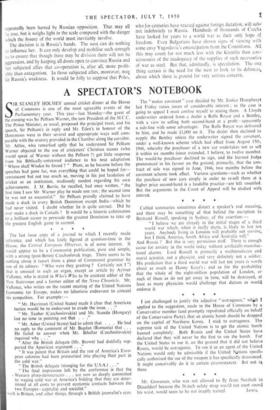 THE Korean war will soon be entering its third week. Important as the military operations are, and vital as is the necessity of bringing them to a close as soon as 'possible, it is on the possible repercussions of the war rather than the war itself that the public mind is anxiously concen- trated. From one point of view the repercussions are reassuring. The United Nations has regained much lost prestige through the promptitude with which it has met the challenge presented to its principles and professions by the North Korean aggression. It is true that the bulk of the responsibility for defence against the aggressor has so far fallen on one member of the organisa- tion, the United States, predominantly, but all the others—Great Britain, Australia, New Zealand, Holland—who are in a position to intervene immediately have done so, and over forty out of fifty-eight State members of the United Nations have formally approved its decision, many of them promising any active sup- port it may be in their power to give. That is the way that U.N.O. was meant to work, and its action has revivified much flagging faith. If its action is successful the last state of the world may be better than the first. But it is far too soon to be counting on success. The tide is not running that way, nor could it be as yet. The Northern Korean move has clearly been long premeditated and well prepared. Though Russia withdrew her forces of occupation at the end of 1948, her military mission has evidently done its work effectively. While there is so far no proof that the Northern Koreans have been supported by Russian material or personnel, their troops give evidence of a training in arms which only one European State could have provided. It is clearly of a different order from anything the forces of the Southern Republic have enjoyed.

That means that the limited detachments the United States has been able to transport from Japan may have a hard fight to hold their ground till reinforcements from the mainland of America or elsewhere can reach them. With such technical questions Peter Fleming, who is well acquainted with con- ditions in China and adjoining territories, deals in some detail in another column. Here it is the larger prospect that must be considered, particularly in the light of such declarations as those embodied in M. Gromyko's statement on Tuesday, the American Ambassador's and Mr. Churchill's speeches the same evening and the debate in the House of Commons on Wednes- day. M. Gromyko demands no prolonged attention. His attack on the United States and on the Secretary-General of the United Nations, who so recently visited Moscow in an attempt at con- ciliation, are part of the common stock of any Soviet propa- gandist. The one passage in the statement which bears a certain semblance of speciousness is that presenting the contention that North Korea is as fully justified in fighting for the unity of Korea as the North in America was in fighting the South in 1861. The answer, in fact, is simple. The United States in 1861 was a federation consisting of the States which had originally united in 1788 and others which had subsequently acceded. The war was begun by the South firing on the American flag. Korea was a unity till Russia, which had been charged with the temporary occupation of the northern parts of the country after the Japanese surrender in 1945, stereotyped the 38th parallel as a line of division, prevented the holding of free elections to the north of it, and so divided Korea between. a totalitarian regime In the north and a parliamentary regime in the south. The Russians frustrated completely the work of the United Nations Commission appointed by the Assembly in 1947 to observe elections throughout the country, with the result that elections were held only in the south, and in 1948 the United Nations Assembly recognised the Government of that section as the Only lawful Government in Korea. So much for any pretended resemblance between the Korean aggression and the American Civil War.

This type of argument, like any argument about the validitv of the Security Council vote in the absence of one of the perma• nent members of the Council, is completely irrelevant. The naked fact of unprovoked aggression starts the world in the. face, and no one except M. Gromyko in his official capacity is under any illusion about the facts. In such a crisis the United Nations had either to act or abdicate. Its rction has saved its life, but what the consequences may be remains undisclosed. The war has already taken a form that it was hoped might be unnecessary. The intention to confine the defence of Southern Korea to action within the territory soh of the 38th parallel has had to be abandoned, for the northern troops could not be allowed to mass, and the northern aircraft to refuel, with impu- nity behind that conventional line. The Americans, in conjunc- tion with the temporarily demoralised Southern Korean troops, may find it hard enough to retain a foothold at all till reinforce. ments arrive from America, perhaps a fortnight hence. But here account must be taken of political possibilities as well as military. To a conflict between Northern Korea and the United Nations there can only be one end, and that an early one. That is so plain that the Northern Koreans, if they believe they will be unsupported, can do nothing but accept the inevitable and retire behind their parallel. That they show no sign of doing that so far is a little ominous. They may have reason to be confident that either Communist Russia or Communist China will support theM, not only with materials but if necessary with men, creating something of the situation arising from the inter- vention of Germany and Italy in the Spanish Civil War. If so the limited and localised campaign now in progress will assume very different dimensions.

There is, of course, another and more disturbing possibility. Russia's ultimate intentions are in this case, as always, beyond divining. She could if she chose make the Korean conflict the starting-point of a third world war, and her moves in other parts of the world in the next few weeks will be closely scruti- nised. That she is organising industrially and militarily for a possible war—Russia in this context includes all Eastern Europe and China—is hardly in doubt. But between possibility and reality a wide gulf lies, and the demonstration that the Korean aggression has immediately closed all divisions in the United States, transcended all political differences in Britain and united in condemnation or active intervention two-thirds of the mem- bers of the United Nations may well prow. the most effective deterrent to action which anything like acquiescence or appease- ment would unquestionably have encouraged. In such circum- stances there is reasonable ground to hope that the Korean war may be confined to Korea. But any prospect of Russia associating herself with the other Great Powers in the negotiation of a peaceful settlement seems unhappily quite illusory. The rift between east and west, so far from closing, widens every day. If the report is true that Russia has indicated that she will not attend the Assembly of the United Nations in September her decision is significant. It means f...-tt the last tenuous link that binds the countries of Eastern Europe to the rest of the world is broken. That, it may be said, only gives formal recog- nition to a situation that exists already. It might indeed increase the working efficiency of the United Nations by eliminating certain members whose speciality is obstruction, and simplifyine the admission of the new members against whom the door has repeatedly been barred by Russian opposition. That may all be true, but it weighs light in the scale compared with the danger which the fissure of the world must inevitably involve.

The decision is in Russia's hands. The west can do nothing to influence her. It can only develop and mobilise such strength as to ensure that though there may be division there will not be aggression, and by keeping all doors open to convince Russia and her subjected allies that co-operation is, after all, more profit- able than antagonism. In those subjected allies, moreover, may lie Russia's weakness. It would be folly to suppose that Poles, who for centuries have reacted against foreign dictation, will sub.I mit indefinitely to Russia. Hundreds of thousands of Czechs, have looked for years to a world war as their only hope of freedom. Even Bulgarians have shown signs of viewing with some envy Yugoslavia's emancipation from the Cominform. All this may count for not much less with the Kremlin than con sciousness of the inadequacy of the supplies of such necessaries of war as steel. But that, admittedly, is speculation. The ono, thing certain is the need for the west to look to its defences, about which there is ground for very serious concern.