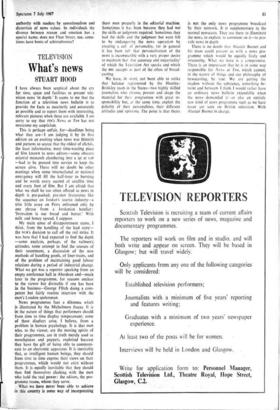 -I have always been sceptical about the cry for time, space and facilities to present tele-

vision news 'in depth.' It seems to me that the function of a television news bulletin is to provide the facts as succinctly and accurately as possible and to report them with interesting,

relevant pictures when these are available. I am sorry to say that tm's News at Ten has not overcome my scepticism.

This is perhaps unfair, for—deadlines being what they are—I am judging it by its first

edition on an evening when news was thinnish and pictures so scarce that the oldest of clichés, the least informative, most time-wasting piece of film known to news editors—some obscure

screen alive. There will no doubt be other evenings when some international or national emergency will fill the half-hour to bursting and be worth every second of satellite time

and every foot of film. But I am afraid that what we shall be too often offered as news in depth is pre-packed, pre-shot featurettes like the sequence on Jordan's tourist industry—a trite little essay on Petra enlivened only by one phrase from a Jordanian hotelier: `Jerusalem -is our bread and butter.' With milk and honey spread, I suppose.

My main sense of disappointment stems, I think, from the handling of the lead story—

the Nua's decision to call off the rail strike. It

was here that I had expected to find the depth —some analysis, perhaps, of the railmen's

attitudes, some attempt to find the sources of their resentment, a discussion of the new methods of handling goods, of liner-trains, and

of the problem of maintaining good labour

relations during a period of industrial change. What we got was a reporter speaking from an empty conference hall in Aberdeen and—much

later in the programme, for reasons unclear to the viewer but divinable if one has been in the business—George Ffitch doing a com- petent but fairly routine interview with the men's London spokesman.

News programmes face a dilemma which is illustrated by the Michelmore fracas. It is

in _the nature of things that performers should from time to time display temperament; some of these displays arise, I believe, from a

problem in human psychology. It is that meh who, to the viewer, are the moving spirits of their programmes, are in truth merely used as mouthpieces and puppets, exploited because they have the gift of being able to communi- cate to an electronic apparatus. It is inevitable that, as intelligent human beings, they should from time to time express their views on their programmes, which would not exist without them. It is equally inevitable that they should then find themselves clashing with the men who hold the real power: the editors, the pro- gramme •teams, whom they serve.

What we have never been able to achieve in this country is some way of incorporating these men properly in the editorial machine. Sometimes it has been because they had not the skills or judgment required. Sometimes they had the skills and the judgment but were felt to be endangering the news operation by creating a cut: of personality, for in general it has been felt that personalisation of the news is incompatible with a very proper desire to maintain that due accuracy and impartiality' of which the Television Act speaks and which the BBC accepts as part of the ethos of broad- casting.

We have, in short, not been able to strike that balance represented by the Huntley- Brinkley team in the States—two highly skilled journalists who choose, present and shape the material for thett programme with great re- sponsibility but, at the same time, exploit the polarity of their personalities, their different attitudes and opinions. The point is that theirs

is not the only news programme broadcast by their network. It is supplementary to the normal newscasts. They are there to illuminate the news, to explain. to comment on it—to pro- vide news in depth

There is no doubt that Alastair Burnet and his team could present us with a news pro- gramme which would be equally lively and interesting. What we have is a compromise. There is an impression that he is in some way responsible for News at Ten, which cannot, in the nature of things and our philosophy of newscasting, be true. We are getting the shadow without the substance, something be- twixt and between. I think I would rather have an ordinary news bulletin extendable when the news demanded it—or else an entirely new kind of news programme such as we have never yet seen on British television. With Alastair Burnet in charge.