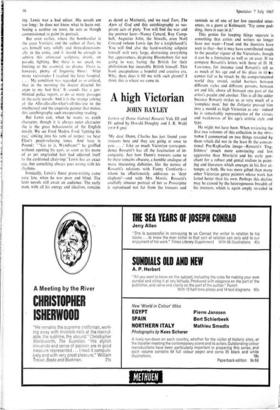 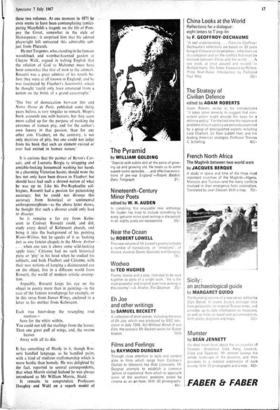 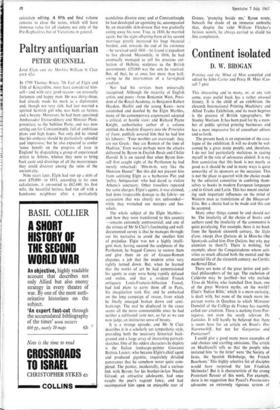 'My dear Dunn, Charles has just found your trousers here and they are going at once to you. . . .' Like so much Victorian correspon- dence Rossetti's has all the fascination of in- congruity. Just how Dunn's trousers came to be there remains obscure, a humble analogue of more interesting dubieties, like the nature of Rossetti's relations with Fanny Cornforth- whom he affectionately addresses as 'dear elephant'—and with Mrs Morris. Rossetti's soulfully sinuous portrait of her as Proserpine is reproduced not far from the trousers and reminds us of one of her few recorded utter- ances, to a guest at Kelmscott. 'Try some pud- ding, there is suet in it.'

This genius kir keeping things separate is something that artists and writers no longer have nor want—Freud and the theorists have seen to that—but it may have contributed much to the peculiar vigour of the Victorians, though it can be a limitation as well as an asset. If we compare Rossetti's letters with those of D. H. Lawrence, for instance (and Rossetti's tell us as much of his age and of his place in it) tisfe cannot fail to be struck by the compartmented world they reveal, sealed barriers between different styles and different persons, between art and life, above all between one part of the artist's psyche and another. This is all the odder because Rossetti strikes us as very much of a `complete man,' but the Zeitgeist pressed him into a mould as high Victorian as any--indeed he is remarkably representative of the virtues and weaknesses of his age's artistic style and type.

He might not have been. When reviewing the first two volumes of this collection in the sPFC- TAJOR I commented on two things revealed by them which did not in the least fit the conven- tional Pre-Raphaelite image—Rossetti's 'Eng- lishness' (much more convincing and less aggressive than Morris's) and his early pen- chant for a robust and genial realism in paint- ing and literature which emerges in his first at- tempts at both. He was more gifted than many other Victorian genre painters whose work has lasted better than his own. Perhaps this decline may be caused by the heterogeneous breadth of his interests, which is again amply revealed in

these two volumes. At one moment in 1871 he even seems to have been contemplating (antici- pating Masefield) a tragedy on the life of Pom- pey the Great, somewhat in the style of Shakespeare: it surprised him that his adored playwright left untreated this admirable sub- ject from Plutarch.

He met Turgenev, who, standing in the famous woodchuck and wombat-haunted garden at Cheyne Walk, argued in halting English that the relation of God to Mahomet must have been somewhat like that of man to the animals. Rossetti was a great admirer of his novels be- fore they were at all known in England: and he was fascinated by Flaubert's Salaininbti, which he thought 'could only have emanated from a nation on the brink of a grand catastrophe.'

`The line of demarcation between this and Notre Dame de Paris. published some thirty years before, is very singular to remark. Hugo's book astounds one with horrors, but they seem more called up for the purpose of evoking the extremes of human pity, and for the author's own luxury in that passion, than for any other aim. Flaubert, on the contrary, is not only destitute of pity, but one could not judge from his book that such an element existed or ever had existed in human nature.'

It is curious that the painter of Byron's Cor- sair, and of Lucrezia Borgia (a strapping and amiable-looking housemaid washing her hands in a charming Victorian basin), should none the less not only have been drawn to Flaubert but should have had such a shrewd notion of what he was up to. Like his Pre-Raphaelite col- leagues, Rossetti had a passion for painstaking accuracy; but he could not divorce this accuracy from historical or sentimental anthropomorphism—as the above letter shows, he thought that such a divorce could only lead to disaster.

So it remains a far cry from Kelm- scott to Croisset. Rossetti could, and did, study every detail of Kelmscott church, and bring it into the background of his painting Water-Willow, but he speaks of it as 'looking just as one fancies chapels in the Marie Arthur-7 .) . . . when one sees it above some wild-looking apple trees.' Cezanne had no such historical piety or 'pity' in his head when he studied his subjects, and both Flaubert and Cezanne, with their new notions of keeping a disinterested eye on the object, live in a different world from Rossetti, the world of modern artistic assump- tion.

Arguably, Rossetti keeps his eye on the object in poetry more than in painting—in the case of the famous woodspurge for example, or in this verse from Sunset Wings, enclosed in a letter to his mother- from Kelmscott.

Save for the whirr within, You could not tell the starlings from the leaves; Then one great puff of wings, and, the swarm heaves Away with all its din.

It has something of Hardy in it, though Ros- setti handled language, as he handled paint, with a kind of studious craftsmanship which is more bardic than homely. He was delighted by the fact, reported to several correspondents, that when Morris visited Iceland he was always introduced as Mr William Morris, Skald.

It remains to congratulate Professors Doughty and Wahl on a superb model of epistolary editing. A fifth and final volume remains to close the series, which will have immense value for all students not only of the Pre-Raphaelites but of Victoriana in general.