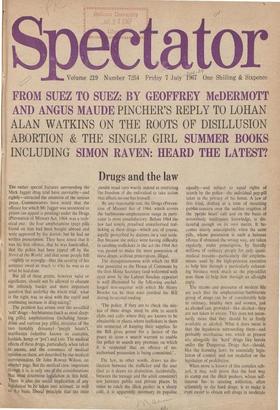 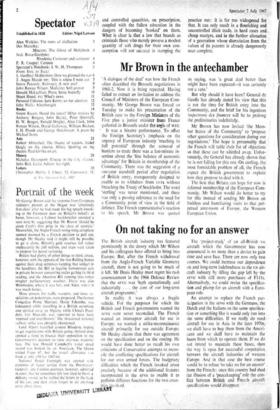 The rather special features surrounding the Mick Jagger drug trial have inevitably—and rightly—attracted the attention of the serious press. Commentators have noted that the offence for which Mr Jagger was sentenced to prison (an appeal is pending) under the Drugs (Prevention of Misuse) Act. 1964. was a tech- , nical one : the four amphetamine (pep) pills found on him had been bought abroad and were approved by his doctor, but he had no written prescription. They have noted that it was his first offence, that he was handcuffed. that the police had been tipped off by the News of the World, and that some people felt —rightly or wrongly--that the severity of his sentence owed as much to who he was as to what he had done.

But all of these points. however valid or significant, should not he allowed to obscure the infinitely harder and more important question that underlay the *hole trial : what is the right way to deal with the rapid and continuing increase in drug-taking?

The problem has arisen over the so-called `soft' drugs--barbiturates (such as most sleep- ing pills), amphetamines (including Benze- drine and various pep pills), mixtures of the two (notably drinamyl—L`purple hearts'), marihuana (whether known 'as cannabis, hashish, hemp or 'pot') and LSD. The medical effects of these drugs, particularly when taken in excess, and the consensus of medical opinion on them, are described by our medical correspondent, Dr John Rowan Wilson, on another page. But the medical view, important though it is. is only one of the considerations that must determine legislation in this field. There is also the social implication of any legislation to be taken into account, as well as at; basic liberal principle that the state should tread very warily indeed in restricting the freedom of the individual to take action that affects no one but himself.

By any reasonable test, the Drugs (Preven- tion of Misuse) Act of 1964. which covers the barbiturate-amphetamine range in parti- cular is most unsatisfactory. Before 1964 the law had simply penalised unauthorised traf- ficking in these drugs—which are, of course, legally prescribed by doctors on a vast scale. But because the police were having difficulty in catching traffickers in the act the 1964 Act was passed to make the mere possession of these drugs, without prescription, illegal.

The disingenuousness with which the Bill was presented to the House of Commons by the then Home Secretary (and welcomed with oven arms by the Labour benches opposite) is well illustrated by the following unchal- lenged non-sequitur with which Mr Henry Brooke (as he then was) justified the Bill during its second reading : The police, if they are to check the mis- use of these drugs. must be able to search clubs and cafes where they are known to be obtainable or places where traffickers in them are suspected of keeping their supplies. So the Bill gives power for a justice of the peace to issue a search warrant to enable the police to search any premises on which' it is suspected that an offence of un- authorised possession is being committed.' equally—and subject to equal rights of search by the police—the individual pep-pill taker in the privacy of his home. A law of this kind, drafted at a time of mounting public concern over the sudden eruption of the `pprple heart' cult and on the basis of notoriously inadequate knowledge, is dis- tasteful enough on its own merits. It be- comes utterly unacceptable when the same pills, whose possession is such a heinous offence if obtained the wrong way, are taken regularly, under prescription, by literally millions of ordinary people for only quasi- medical reasons--particularly the ampheta- mines. used by the high-pressure executive to help him through a particularly exhaust- ing business week much as the pop-addict uses them to help him through an all-night pry.

The strains and pressures of modern life are 'such that the amphetamine/barbiturate group of drugs can be of considerable help to ordinary, healthy men and women, just as alcohol can, provided--like alcohol—they are not taken in excess. This does not neces- sarily' Mean that they should be as freely available as alcohol. What it does mean is that the legislation surrounding them--and probably marihuana, too, which at present sits alongside the 'hard' drugs like heroin under the Dangerous Drugs Act—should, like the licensing laws, be essentially legis- lation of control, and not modelled on the legislation of prohibition. and controlled quantities, on prescription, coupled with the fullest education in the dangers of becoming 'hooked' on them. What is clear is that a law that brands as criminals those who merely possess a modest quantity of soft drugs for their own con- sumption will not succeed in stamping the practice out: it is far too widespread for that. It can only result in a flourishing and uncontrolled illicit trade, in hard cases and cheap martyrs, and in the further alienation of a generation whose dissociation from the values of its parents is already dangerously near complete.