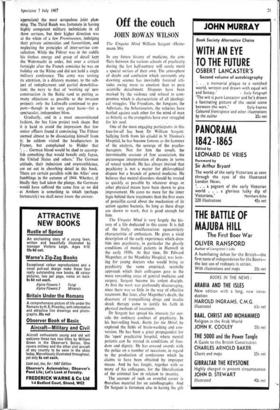 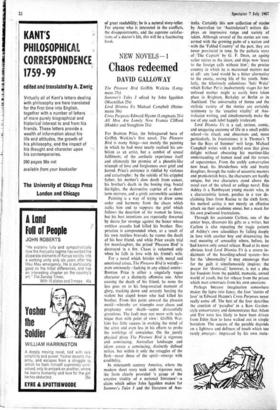 The Unquiet Mind William Sargant (Heine- mann 30s) In any future history of medicine, the con- flicts between the various schools of psychiatry during the last half-century will surely merit a special section of their own. The atmosphere of doubt and confusion which surrounds any dawning science has inevitably fostered atti- tudes owing more to emotion than to pure scientific detachment. Disputes have been marked by the violence and refusal to com- promise which is characteristic of all ideologi- cal struggles. The Freudians, the Jungians, the Adlerians, the behaviourists, the eclectics have battled against each other for the mind of man as bitterly as the evangelists have ever struggled for his soul.

One of the most engaging participants in this free-for-all has been Dr William Sargant. Sallying forth from his citadel in St Thomas's Hospital, he has become famous as the hammer of the analysts, the scourge of the psycho- therapists. Not for him the couch, the interminable sessions of free association, the picturesque interpretation of dreams in terms of sexual symbols. He has always insisted that psychiatry is not a matter for philosophical dispute but a branch of general medicine. He believes that mental disorders should be treated as quickly as possible by whatever drugs or other physical means have been shown to give improvement. He cares no more for the inner logic behind these treatments than the first users of penicillin cared about the mechanism of its action against bacteria. So long as these drugs are shown to work, that is good enough for him.

The Unquiet Mind is very largely the his- tory of a life dedicated to this cause. It is full of the lively, unselfconscious egocentricity characteristic of enthusiasts. He gives a vivid description of the early experiences which drew him into psychiatry, in particular the ghastly conditions of mental patients in Hanwell in the early 1930s. At that time, Dr Edward Mapother, at the Maudsley Hospital, was look- ing for young doctors who would bring to psychiatry the same empirical, scientific approach which their colleagues gave to the more rewarding areas of general medicine and surgery. Sargant became his ardent disciple. At first the work was profoundly discouraging, since there was so little in the way of effective treatment. But later, after Mapother's death, the discovery of tranquillising drugs and insulin shock therapy came to justify his faith in physical methods of treatment.

Dr Sargant has spread his interests far out- side the ordinary confines of psychiatry. In his best-selling book, Battle for the Mind, he explored the fields of brain-washing and con- version. He has been a great propagandist for the 'open' psychiatric hospital, where mental patients can be treated in conditions of free- dom and dignity. He has crossed swords with the police on a number of occasions, in regard to the production of confessions which he claims to have been obtained by improper means. And he has fought, together with so many of his colleagues, for the liberalisation of the criminal law in relation to insanity.

The account of such an eventful career is first-class material for an autobiography. And Dr Sargant is fortunate also in having the gift

of great readability; he is a natural story-teller. For anyone who is interested in the conflicts, the disappointments, and the supreme satisfac- tions of a doctor's life, this will be a fascinating book.