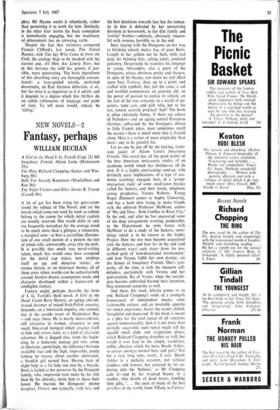 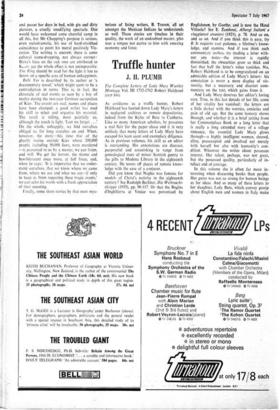 A lot of gas has been rising for generations round the subject of The Novel, and yet the novels which come out week by week so seldom belong to the canon for which initial capitals are usually reserved. Our world shifts its axis too frequently nowadays for the average novel to be much more than a glimpse, a conjecture, a marginal note—at best a crystalline illumina- tion of one small section of a pattern the rest of which rolls, unknowably, away into the dark. It is possible that much true novel-writing talent, much that would once have competed for the initial cap stakes, now employs itself on spy and detective stories, on science fiction, or on historical themes, all of them areas where worlds can be authoritatively created, borders drawn, assumptions made, and character developed within a framework of intelligible fantasy.

Fantasy might, perhaps, describe the form of J. G. Farrell's third novel, A Girl in the Head. Count Boris Slattery, an ageing and cul- tivated charmer of mixed Irish-Polish ancestry, descends, on a lukewarm impulse, one summer day at the seaside resort of Maidenhair Bay —and stays there. He is nearly down-and-out, still attractive to women, attractive to . one small, blue-eyed mongrel which attaches itself to him and serves, later, as a kind of character reference. He is dogged also, from the begin- ning, by a lecherous teenage girl who serves to illustrate, agonisingly, the difference between available fact and the high, impossible, poetic fantasy he weaves about another adolescent, a Swedish girl named Inez. Having been of slight help to a fat lady run into by a bicycle, Boris is hailed as her preserver by the Dongeon family, who, impressed even more by his title than by his chivalry, invite him to share their house. He marries the Dongeons' plump daughter, Flower, not cynically, with love and

the best intentions towards her; but the roman- tic in him is defeated by her unswerving devotion to housework, to her dim family and 'artistic' brother—odiously, obviously success- ful with women, horribly so in the end.

Inez, staying with the Dongeons on her way to finishing school, makes hay of poor Boris. Caught in her golden net he feels, with real pain, his thinning hair, aching joints, outdated gallantry. Desperately he transfers his longings to young Alessandro, also a guest of the Dongeons, whose obstinate purity and shyness, in spite of his beauty, can make no real effect upon Inez. Fantasy, then, up to a point, and stuffed with symbols; but, just the same, a sad and truthful commentary on growing old, on the power of passion to outlive its vehicle, on the fate of the true romantic in a world of go- getters, tame cats, and girls who, put to the test, remain severely practical. Sad? The book is often extremely funny; if there are echoes of Nabokov—and an ageing central European charmer, suffocated by the bourgeois, driven to little French jokes, must sometimes recall the master—there is much more that is Farrell alone. Here is a writer of more originality than most: one to be grateful for.

Let no one be put off by the louring, irrele- vant jacket of Alison Lurie's Imaginary Friends. This novel has all the good points of the best American seriocomic studies of an academic world which has dottinesses all its own. It is a highly entertaining send-up, with distinctly scary implications, of a type of aca- demic sociology engaged, here, in a 'group- interaction study' of some small-town mystics called the Seekers, and their lovely, enigmatic young prophetess, Verena Roberts. Young Roger Zimmern comes to Sophis University, and has a hard time trying to make friends with the admired Professor McMann, author of 'We and They: Role Conflict in River City.' In the end, and after he has uncovered some of the deep antagonisms working, predictably, in the Department, he joins forces with McMann to do a study of the Seekers, some- things which is to be known as the Sophis Project. How the two men become acquainted with the Seekers, and how far in the end (and in different ways) each strays from the pre- scribed path of 'non-directional involvement,' and how Verena fulfils her own destiny, are the themes of Imaginary Friends. One's sym- pathy, all the time, is with the innocent self- deluders, particularly with Verena and her god-creation, Ro of Varna; when the sociolo- gists become embroiled beyond their intention, they command sympathy as well.

And there, this week, hilarity comes to an end. Richard Chopping's study of a youngish homosexual of independent means, some fashionable culture, and an insatiable appetite for sexual experience, leaves the reader chilled, thoughtful and depressed. If this book is meant as a plea for the total repeal of all sanctions against homosexuality, then it is not more than partially successful; such repeal might kill the squalid small clubs and assignation places, which Richard Chopping describes so well, but would it ever lead to the simple, world-lost, public affection which the hero, Boyde Ashlar, so envies amongst normal boys and girls? Not for a very long time, surely, if ever. Boyde Ashlar is a pathetic creation, not without kindness and honour, but enslaved by his en- during itch—his 'bulimia,' as Mr Chopping calls it—and by his wrecked beauty of a mother, who drools of dead lovers, fondling their gifts, `. . . the stock of many of the best jewellers in the world, from Tiffany to Cartier,'

and passes her days in bed, with gin and dirty pictures, a cruelly unedifying spectacle. One would have welcomed some cheerful camp in all this, but Mr Chopping's purpose is serious, even melodramatic, his use of hard-stretched coincidence to point his moral positively Vic- torian. The writing is uneven; there is some cultural name-dropping, not always correct: Blake's lines on the sick rose are attributed to Kt41s; yet the whole effect is not unimpressive. The Ring should be read for the light it has to throw on a specific area of human unhappineis.

Babi Yar is described by its author as 'a documentary novel,' which might seem to be a contradiction in terms. This is, in fact, the chronicle of real events as seen by a boy of twelve during the two-year German occupation of Kiev. The events are real; names and places have been changed; a good writer has used his skill to select and organise his material. The result is telling, most painfully so, although the touch is light. 'Lest we forget ...' On the whole, unhappily, we find ourselves obliged to, for long stretches on end. When, however, the story—this time that of the ghastly ravine outside Kiev where 200,000 people. including 50,000 Jews, were murdered —is presented to us by a master, we can listen, and will. We get the horror, the shame and bewilderment once more, at full force, and, when he says: 'It is imperative that we under- stand ourselves, that we know where we came from, where we are and what we are—if only to keep us from repeating these tragic events,' we can echo his words with a fresh appreciation of their meaning.

Finally, some short stories by that most mys-

terious of living writers, B. Traven, all set amongst the Mexican Indians he understands so well. These stories are timeless in their quality, the work of an undoubted master, Ivho uses a tongue not native to him with amazing economy and force.