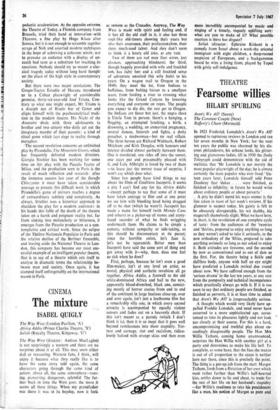 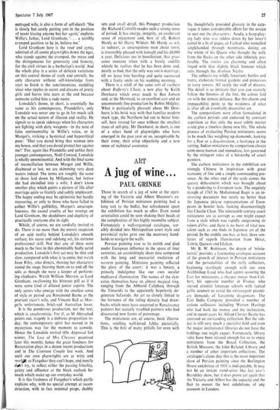 Aren't We All? (Savoy) The Constant Couple (New) Rafferty's Chant (Mermaid) In 1923 Frederick Lonsdale's Aren't We All? opened to rapturous reviews in London and ran for seven months in New York; for the next ten years the public was charmed by his dis- creet philanderers, his urbane lords,- his glitter- ing and glamorous ladies, till in.I930 the. Daily Telegraph could demonstrate with the aid of statistics that `Mr Lonsdale is not merely the most popular playwright of the day; he is almost certainly the most popular who ever lived.' Six- teen years later, Lonsdale himself told Peter Daubeny that 'dukes . . . were finished,. as finished as infidelity; in future he would write about ordinary people or about perverts.'

A pity he didn't mend his ways sooner is the line taken in most of last week's reviews. If his glamour is suspect today, his gaiety is felt to be obscurely disreputable, his wit shabby, his stagecraft shamelessly slight. What we have here, in short, is the revolution of one complete cycle of taste: from the audiences of the 'twenties and 'thirties, prepared to enjoy anything so long as they weren't asked to take it seriously, to the new orthodoxy of the 'fifties, prepared to take anything seriously so long.as not asked to enjoy it. Both attitudes are tiresome, and the second by now as conventional and as out of date as the first. For, the theatre being a fickle and shiftless body, anyone with half an eye might have predicted a Lonsdale revival due round about now. We have suffered enough from the `serious drama' in the last ten years, at any rate from the pomposity and technical incompetence which practically always go with it. If it is too soon to say that ordinary people are finished, as finished as perverts, it is at least time to admit that Aren't We All? is irreproachably serious.

A thought which would very likely have ap- palled Freddie Lonsdale, and need never have occurred to a more sophisticated age, accus- tomed to take its pleasures lightly and not look too closely at their source. For this is a hard, uncompromising and truthful play about ex- ceedingly disagreeable people. The Hon Mrs Willie Tatham, • coming home unannounced, surprises the Hon Willie with another girl at a party and determines to make his life hell. To complain, as some have, that the fuss she makes is out of all proportion to the cause is neither here nor there, since this is precisely the point. The thing is a put-up job from the start. Margot Tatham, fresh from a flirtation of her own which went rather further than Willie's half-hearted kiss, settles down to lie and cheat, to trade for the rest of her life on her husband's stupidity —tor Willie's readiness to take his punishment like a man, his notion of Margot as pure and outraged wife, is also a form of self-deceit. 'She is slowly but surely putting you in the position of never kissing anyone but her again,' explains Willie's father, Lord Grenham, 4. . . a terribly cramped position to be in, believe me.'

Lord Grenham here is the roué and cynic, admired of all comic playwrights down the ages, who stands against the cramped, the mean and the disingenuous for generosity and honesty, for the civil virtues in a barbarian's world. And the whole play is a series of delicate variations on this central theme of truth and untruth; the only character without self-knowledge from start to finish is the sanctimonious, meddling vicar who tipples in secret and dreams of pretty girls and bursts into tears at the end because someone called him a rude name.

Lonsdale's theme, in short, is essentially the same as his contemporary, Pirandello's, only Lonsdale was never one to go in for much talk on the actual nature of illusion and reality. He signals so to speak sideways when his characters are fighting with dirty weapons—in the note of false sentimentality in Willie's voice, or in Margot's, striking a hysterical and hypocritical pose: 'That you dared bring that woman into my house, and that you dared protect her against me!' For; again like Pirandello and unlike their younger contemporary, Noel Coward, Lonsdale is wholly unsentimental. And with the final scene of reconciliation between Margot and Willie, disabused at last, we are skimming very deep waters indeed. The terms are roughly the same as those laid down by Millamant, but before she had dwindled into a wife; I don't know another play which paints a picture of life after marriage quite so frankly and subtly unpleasant. The happy ending may be optimistic but hardly reassuring, or only to those who have failed to collect Willie's gullibility, Margot's unscrupu- lousness, the casual cruelty of her revenge on Lord Grenham, the shoddiness and duplicity of practically everyone else in sight.

Which, of course, we are cordially invited to do. There is no more than the merest suspicion of an acid reality behind Lonsdale's smooth surface, his suave and sidelong wit, his extreme professional skill. Not that any of these were much to the fore in this abominably badly acted production. Lonsdale's first act may be thin and slow,-compared with what is to come, but watch Joan Riley, who directs, shoving her characters round the stage, heaving them on to and off the sofa as though she were a keeper of perform- ing elephants. Watch William Mervyn, as Lord Grenham, swallowing his bitterest pill as if it were some kind of diluted junior aspirin. The only actors who emerge with the smallest sense of style or period are Rosamond Burne as the prurient vicar's wife, and Vincent Ball as Mar- go'ts unfortunate, brick-rod Australian lover.

It is the ponderous production, not the text, which is anachronistic. For if, as M Abirached points out, tragedy is a dubious proposition to- day, the contemporary spirit has moved in its mysterious way for the moment to comedy. Hence the Lonsdale revival (On Approval last winter, The Last of Mrs Cheyney promised later this month), hence the great fondness for Restoration plays in a dozen recent productions and in The Constant Couple last week. And until our own playwrights are as witty and wer10 as Farquhar they can't hope, and mostly dirth try, to reflect either the passing frivolity, gaiety and affluence or the bleak outlook be- neath which make up our everyday world.

It is this freshness of Farquhar's which partly explains why, with no special attempt at recon- struction, with in fact minimal props, shabby sets and small detail, this Prospect production (by Richard Cottrell) exudes such a strong sense of period. It has energy, integrity, an exuberant sense of enjoyment and, best of all, Robert Hardy as Sir Harry Wildair. Mr Hardy as wit, as seducer, as unscrupulous man about town, is irresistibly pleased with himself and his £8,010 a year. Delicious too in humiliation, that grue- some moment when with a barely audible whistle he realises that he has been done and, nearly as bad, that the only way out is marriage; till we leave him bustling and quite recovered with a fruity smile on his wedding morning.

There is a whiff of the same sort of raciness about Rafferty's Chant, a new play by Keith Dewhurst which owes much to Ben Jonson and, at the Mermaid, to an excellent cast and an uncommonly fine production by Robin Midgley. What is particularly pleasant about Mr Dew- hurst is his brisk way with that familiar modern stock type, the Northern lad out to better him- self, here treated for once without the smallest trace of self-pity. Mr Dewhurst, in short, is one of a select band of playwrights who have emerged in the past year or so, recognisable by their irony, their crisp objectivity and a new sense of technical assurance.