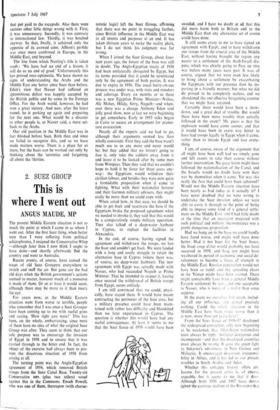 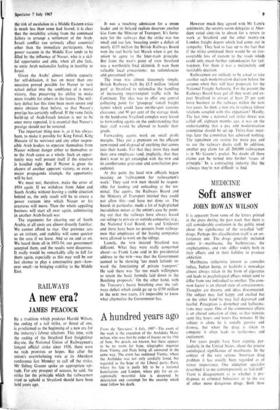 This is where I went out

The present Middle Eastern situation is not so much the point at which I came in as where I went out. After the first Suez thing, when better men than I were suffering from political schizophrenia, I resigned the Conservative Whip —although later than I now think I ought to have done—and shortly afterwards fled the country and went to Australia.

Recent events, of course, have caused the noses of old Suez Groupers everywhere to twitch and sniff the air. But gone are the bad old days when the British government's actions seemed to matter, however much of a nonsense it made of them. Or so at least it would seem, although there may be more to it than meets the eye.

For years now, as the Middle Eastern situation went from worse to terrible, people who remember that I was once a Suez Grouper have been coming up to me with rueful grins and saying, 'How right you were!' This has been, on the whole, embarrassing, since most of them have no idea of what the original Suez Group was after. They seem to think that our sole purpose was to encourage the invasion of Egypt in 1956 and to ensure that it was carried through to the bitter end. In fact, the object of the exercise had always been to pre- vent the disastrous situation of 1956 from arising at all.

The turning point was the Anglo-Egyptian agreement of 1954, which _removed British troops from the Suez Canal Base. Twenty-six Conservative MPS (plus two tellers) voted against this in the Commons. Enoch Powell, who was one of them, thereupon (with charac-

teristic logic) left the Suez Group, affirming that there was no point in struggling further, since British influence in the Middle East was to all intents and purposes at an end. It has taken thirteen years to make the reality plain, but I do not think his judgment was far wrong.

When I joined the Suez Group, about four- teen years ago, the future of the base was still in doubt. The Anglo-Egyptian treaty of 1936 had been unilaterally abrogated by Egypt, but its terms provided that it could be terminated only by the agreement of both parties. It was due to expire in 1956. The usual hurry-on-out process was under way, with riots and murders and sabotage. Every six months or so there was a new Egyptian Prime Minister—Nahas, Aly Maher, Hilaly, Sirry, Neguib—and when- ever there was a change Anthony Eden said jolly good show, now at last we were beginning to get somewhere. Early in 1953 talks began in Cairo to secure an arrangement for prema- ture evacuation.

Nearly all the experts said we had to go, although their arguments seemed less than wholly consistent. First they said the base wasn't much use to us any more and never would be; but they added that we weren't going to

lose it, only take the soldiers away from it

and leave it to be looked after by some men from Wimpeys. Then they said that we couldn't hope to hold it by force for three years any- way: the Egyptians would withdraw their civilian labour, and besides they were now quite

a forMidable proposition when it came to fighting. What with their nationalist fervour and their German military advisers, they might easily be more than we could cope with.

When asked how, in that case, we should be able to get back and reactivate the base if the

Egyptians broke the proposed agreement when we needed to invoke it, they said that this would be a comparatively simple military operation.

They also talked of a deep-water harbour in Cyprus, to replace the facilities in Alexandria.

In the end, of course, having signed the agreement and withdrawn the troops, we lost the base and couldn't get back. We were landed

with a long and costly struggle to retain the alternative base in Cyprus (where there was,

of course, no deep-water harbour). The new agreement with Egypt was actually made with Nasser, who had succeeded Neguib as Prime Minister. That he intended to respect it, having once secured the withdrawal of British troops from Egypt, seems unlikely.

I am still convinced that we could, physi- cally, have stayed there. It would have meant contracting the perimeter of the base area, but a military presence could have been main- tained with rather less difficulty and bloodshed than we later experienced in Cyprus. The question is whether this would have had any useful consequences. At least it seems to me that the Suez fiasco of 1956 would have been

avoided, and I have no doubt at all that this did more harm both to Britain and to the Middle East than any alternative set of events could have done.

It still seems crazy to me to have signed an agreement with Egypt, and to have withdrawn our troops from the crucial area of the Middle East, without having brought the region any nearer to a settlement of the Arab-Israeli dis- pute, which was clearly going to flare up into war before many years were past. It was, of course, argued that we were even less likely to bring about a settlement by exacerbating

the Egyptians with our presence than by de- parting in a friendly manner; but what we did

do proved to be completely useless, and we abandoned the one effective bargaining counter that we might have retained.

Certainly there would have been a show- down, and a great deal of trouble. But would there have been more trouble than actually followed in the event? My guess is that the explosion would have come sooner, and that it would have been in every way better to have had troops legally in Egypt when it came, rather than to invade Egypt and lose every- thing.

I am, of course, aware of the argument that all might have been well had we simply gone and left events to take their course without further intervention. No great harm might have followed the nationalisation of the Canal, and the Israelis would no doubt have won their

war by themselves when it came. Yet was this really the best that could have been achieved?

Would not the Middle Eastern situation have been nearly as bad today as it actually is? I have never doubted that we were wrong to undertake the Suez invasion unless we were able to carry it through to the point of being able to impose some kind of a general settle- ment on the Middle East. and I had little doubt at the time that an operation prepared with such political and militar% incompetence was a pretty dangerous proposition.

Had we hung on in the base we could hardly have fared worse, and might well have done better. Had it not been for the Suez fiasco,

the Iraqi coup detat would probably not have occurred in 1958, and Iraq just might have

weathered its period of economic and social de- velopment to become a focus of strength in the Middle East. Russian penetration would not have been so rapid, and the spreading chaos

Eastern settlement by now. and one acceptable to Nasser, who is more of a realist than some suppose.

In the event we ourselves lost much, includ- ing all our influence. and gained precisely

nothing. Could the whole situation in the Middle East have been made worse than it is now, more than ten years later?

From the Suez fiasco of 1956-57 developed the widespread conviction, only now beginning to be weakened, that Afro-Asian nationalists must always be right--hirvever dangerous and incompetent—and that the developed countries must always be wrung. It gave the green light to Sukarno's adventures in New Guinea and Malaysia. It encourag,:d disastrous irresponsi- bility in Africa, and it has led to our present troubles in South Arabia and Aden.

Whether this unhappy history offers any lessons for the present crisis is, of course, arguable, but it seems to me that it does Although both 1956 and 1967 have shown (given the cautious realism of the Russians) that

the risk of escalation in a Middle Eastern crisis' is much less than some had feared, it is clear that the instability arising from the continued failure to arrange a settlement of the Arab- Israeli conflict can seriously affect countries' other than the immediate participants. Any power vacuum in the Middle East tends to be filled by the influence of Nasser, who is a skil- ful opportunist and able, when all else fails, to unite Arab nationalist feeling in hostility to Israel.

Given the Arabs' almost infinite capacity for self-delusion, it has on more than one occasion proved possible for Nasser to turn actual defeat into the semblance of a moral victory, thin preserving his ability to make more trouble for others in the future. The mili- tary defeat has this time been more severe and more obvious than before, so that Nasser's prestige has certainly suffered. If the same futile, build-up of Arab-Israeli tension is not to be once more repeated, it is essential that Nasser's prestige should not be restored.

The important thing now is, as it has always been, to make it possible for King Feisal, King Hussein (if he survives) and any other respon- sible Arab leaders to separate themselves from Nasser without danger either to themselves or to the Arab cause as a whole. Such an oppor- tunity may well present itself if the situation is handled right. But if Nasser is given the chance of another apparent victory, or even a major propaganda triumph, the opportunity will be lost.

We must not, therefore, make the error of 1954 again. If we withdraw from Aden and South Arabia without leaving a stable situation behind us, the only result will be to create a power vacuum into which Nasser or his creatures will move. Then the whole appalling business will start all over again, culminating in another Arab-Israeli war.

The arguments for clearing out of South Arabia at all costs are almost drearily familiar. We cannot afford to stay. Our presence acts as an irritant, and stability will come quicker to the area if we leave. And so on and so on. We heard them all in 1953-54; our government accepted them, and the results were disastrous. It really would be remarkably silly to fall for them again, especially as this may well be our last chance to play a constructive part—how- ever small—in bringing stability to the Middle East.