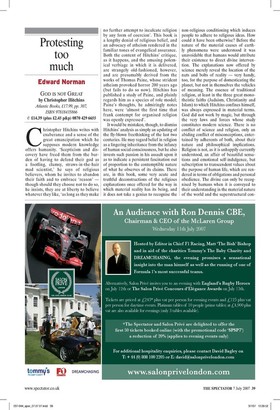 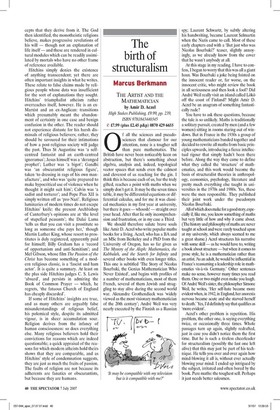 Edward Norman GOD IS NOT GREAT by Christopher Hitchins Atlantic Books, £17.99, pp. 307, ISBN 97818435866 © £1439 (plus £2.45 p&p) 0870 429 6655 Christopher Hitchins writes with exuberance and a sense of the great emancipation which he supposes modern knowledge offers humanity. 'Scepticism and discovery have freed them from the burden of having to defend their god as a footling, clumsy, straws-in-the-hair mad scientist,' he says of religious believers, whom he invites to abandon their faith and to embrace 'reason' — though should they choose not to do so, he insists, they are at liberty to believe whatever they like, 'as long as they make no further attempt to inculcate religion by any form of coercion'. This book is a lengthy denial of religious belief, and an advocacy of atheism rendered in the familiar tones of evangelical assurance. Both the content of Hitchins' critique, as it happens, and the amusing polemical verbiage in which it is delivered, are strangely old-fashioned, however, and are presumably derived from the works of Thomas Paine, whose strident atheism provoked horror 200 years ago (but fails to do so now). Hitchins has published a study of Paine, and plainly regards him as a species of role model; Paine's thoughts, he admiringly notes here, were 'almost the first time that frank contempt for organised religion was openly expressed'.

It would be mistaken, though, to dismiss Hitchins' analysis as simply an updating of the fly-blown freethinking of the last two centuries. He may regard belief in religion as a lingering inheritance from the infancy of human social consciousness, but he also invests such passion in his assault upon it as to indicate a persistent fascination out of proportion to the contemptible nature of what he observes of its claims. There are, in this book, some very acute and truthful deconstructions of the religious explanations once offered for the way in which material reality has its being, and it does not take a genius to recognise the non-religious conditioning which induces people to adhere to religious ideas. How could it have been otherwise? Before the nature of the material causes of earthly phenomena were understood it was unavoidable that humans would attribute their existence to direct divine intervention. The explanations now offered by science merely reveal the location of the nuts and bolts of reality — very handy, too, for the purpose of domesticating the planet, but not in themselves the vehicles of meaning. The essence of traditional religion, at least in the three great monotheistic faiths (Judaism, Christianity and Islam) to which Hitchins confines himself, was always expressed in material terms. God did not work by magic, but through the very laws and forces whose study constitutes modern science. There is no conflict of science and religion, only an abiding conflict of misconceptions, entertained by adherents of both, about their nature and philosophical implications. Religion is not, as it is unhappily currently understood, an affair of beautiful sensations and emotional self-indulgence, but subscription to transcendent values about the purpose of human life, which are rendered in terms of obligations and personal obedience. The divine can only be recognised by humans when it is conveyed to their understanding in the material nature of the world and the superstructural concepts that they derive from it. The God then identified, the monotheistic religions believe, makes progressive revelations of his will — though not an explanation of life itself — and these are rendered in cultural modules which can be readily assimilated by mortals who have no other frame of reference available.

Hitchins simply denies the existence of anything transcendent; yet there are often important insights in what he writes. These relate to false claims made by religious people whose data was insufficient for the sort of explanations they sought. Hitchins' triumphalist atheism rather overreaches itself, however. He is an exMarxist and an ex-Anglican: transitions which presumably meant the abandonment of certainty in one case and benign confusion in the other. The reader should not experience distaste for his harsh dismissals of religious believers; rather, they should be savoured for their intimations of how a post-religious society will judge the past. Thus St Augustine was 'a selfcentred fantasist and an earth-centred ignoramus'; Jesus himself was a 'deranged prophet'; Luther was 'a bigot'; Gandhi was 'an obscurantist religious figure', taken `to dressing in rags of his own manufacture', and who was 'quite prepared to make hypocritical use of violence when he thought it might suit him'; Calvin was 'a sadist and torturer'; and Pope Pius XII is simply written off as 'pro-Nazi'. Religious luminaries of modern times do not escape Hitchins' knife: the present Archbishop of Canterbury's opinions are at 'the level of stupefied peasants'; the Dalai Lama 'tells us that you can visit a prostitute so long as someone else pays her,' though Martin Luther King, whose resort to prostitutes is duly registered, apparently paid for himself; Billy Graham has a 'record of opportunism and anti-Semitism'; and Mel Gibson, whose film The Passion of the Christ has become something of a modern religious classic, is a 'fascist and ham actor'. It is quite a summary. At least on the plus side Hitchins judges C. S. Lewis 'absurd', and persists in admiring the Book of Common Prayer — which, he regrets, 'the fatuous Church of England has cheaply discarded'.

If some of Hitchins' insights are true, and as many others are arguably false misunderstandings of religious belief, his polemical style, despite its admitted vigour, is in sheer accumulation sour. Religion derives from the infancy of human consciousness: so does everything else. Many religious believers hold their convictions for reasons which are indeed questionable; a quick appraisal of the reasons for which modern atheists hold theirs shows that they are comparable, and as Hitchins' style of condemnation suggests, they are just as much the fruits of passion. The faults of religion are not because its adherents are fanatics or obscurantists, but because they are humans.