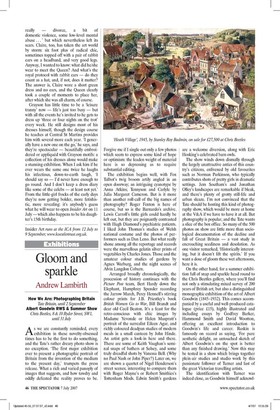 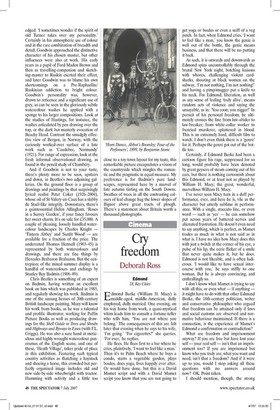 Andrew Lambirth How We Are: Photographing Britain Tate Britain, until 2 September Albert Goodwin RWS & Summer Show Chris Beetles, 8 & 10 Ryder Street, SW1, until 31 July s we are constantly reminded, every exhibition in these novelty-obsessed times has to be the first to do something, and the Tate's rather dreary photo show is no exception. 'The first major exhibition ever to present a photographic portrait of Britain from the invention of the medium to the present day,' trumpets the press release. What a rich and varied panoply of images that suggests, and how tawdry and oddly defeated the reality proves to be.

Forgive me if I single out only a few photos which seem to express some kind of hope or optimism: the leaden weight of material here is so depressing as to require substantial editing.

The exhibition begins well, with Fox Talbot's twig broom artily angled in an open doorway; an intriguing cyanotype by Anna Atkins; Tennyson and Carlyle by Julia Margaret Cameron. But is it more than another roll-call of the big names of photography? Roger Fenton is here of course, but so is the Barnardo's archive. Lewis Carroll's little girls could hardly be left out, but they are poignantly contrasted with Hugh Diamond's psychiatric patients. I liked John Thomas's studies of Welsh national costume and the photos of performers such as Dan Leno. But what really shone among all the reportage and records were the marvellous gelatin silver prints of vegetables by Charles Jones. Those and the amateur colour studies of gardens by Agnes Warburg, and the night scenes of Alvin Langdon Coburn.

Arranged broadly chronologically, the procession of history continues with the Picture Post team, Bert Hardy down the Elephant, Humphrey Spender recording the Jarrow March, Percy Hennell's stirring colour prints for J.B. Priestley's book British Women Go to War, Bill Brandt and dear old Cecil Beaton. It's a feast for the retro-conscious with chic images by Madame Yevonde or Helen Muspratt's portrait of the surrealist Eileen Agar, and richly coloured deadpan studies of modern meals in a small canteen by John Hinde. An artist gets a look-in here and there. There are some of Keith Vaughan's seminal snaps of bathers at Selsey, and some truly dreadful shots by Vanessa Bell. (Why no Paul Nash or John Piper?) Later on, we are shown a quartet of Nigel Henderson's street scenes; interesting to compare them with Roger Mayne's or Robert Smithies's Tottenham Mods. Edwin Smith's gardens are a welcome diversion, along with Eric Hosking's celebrated barn owls.

The show winds down dismally through the largely unattractive antics of this country's citizens, enlivened by old favourites such as Norman Parkinson, who typically contributes shots of pretty girls in dramatic settings. Jem Southam's and Jonathan 011ey's landscapes are remarkable if bleak, and there's plenty of grotty still-life and urban sleaze. I'm not convinced that the Tate should be hosting this kind of photography show, which would be more at home at the V&A if we have to have it at all. But photography is popular, and the Tate wants a slice of the box office. So many of the 500 photos on show are little more than sociological documentation of the decline and fall of Great Britain — a vast study in encroaching seediness and desolation. As one visitor remarked, 'Historically interesting, but it doesn't lift the spirits.' If you want a dose of gloom these wet afternoons, here it is.

On the other hand, for a summer exhibition full of snap and sparkle head round to the Chris Beetles gallery, where you'll find not only a stimulating mixed survey of 200 years of British art, but also a distinguished monographic exhibition of the art of Albert Goodwin (1845-1932). This comes accompanied by a useful and well-produced catalogue (price i15), highly illustrated and including essays by Godfrey Barker, Hammond Smith and David Wootton, offering an excellent introduction to Goodwin's life and career. Ruskin is famously on record as saying, Tor pure aesthetic delight, an untouched sketch of Albert Goodwin's on the spot is better than any finished drawing.' Now this may be tested in a show which brings together plein-air studies and studio work by this passionate follower of Turner and last of the great Victorian travelling artists.

The identification with Turner was indeed close, as Goodwin himself acknowledged: 'I sometimes wonder if the spirit of old Turner takes over my personality.' Certainly in his atmospheric use of colour and in the rare combination of breadth and detail, Goodwin approached the distinctive character of his chosen master, but other influences were also at work. His early years as a pupil of Ford Madox Brown and then as travelling-companion and sketching-master to Ruskin exerted their effect, and later Goodwin was to blame his own shortcomings on a Pre-Raphaelite/ Ruskinian addiction to bright colour. Goodwin's personality was, however, drawn to reticence and a significant use of grey, as can be seen in the gloriously subtle watercolour washes he applied with a sponge to his larger compositions. Look at the studies of Hastings, for instance, the washes articulated by pen drawing over the top, or the dark but masterly evocation of Beachy Head. Contrast the smudgily effective view of Bergen, in Norway, with the curiously worked-over surface of a late work such as `Caudebec, Normandy' (1921). For range of expression, look at the fresh informal observational drawing, as found in the pencil study of Chambery.

And if Goodwin is not to your taste, there's plenty more to be seen, upstairs and down, in Beetles's two adjoining galleries. On the ground floor is a group of drawings and paintings by that surprisingly lyrical realist Peter Coker (1926-2004), whose oil of St-Valery-en-Caux has a slabby de Stael-like integrity. Downstairs, there's a quintessential Helen Allingham, 'Roses in a Surrey Garden', if your fancy favours her sweet charm. It's on sale for £35,000. A couple of pleasing, loosely handled watercolour landscapes by Charles Knight — `Tintern Abbey' and 'Sunlit Wood' — are available for a fraction of the price. The underrated Thomas Hennell (1903-45) is represented by both watercolours and drawings, and there are fine things by Hercules Brabazon Brabazon. But the centrepiece of the mixed summer display is a handful of watercolours and etchings by Stanley Roy Badmin (1906-89).

Chris Beetles is something of an expert on Badmin, having written an excellent book on him which was published in 1985, and regularly showing his work. Badmin is one of the unsung heroes of 20th-century British landscape painting. Many will know his work from books, as he was a talented and prolific illustrator, working for Puffin Picture Books as well as producing drawings for the Shell Guide to Trees and Shrubs and Highways and Byways in Essex (with EL. Griggs). He was also a sure hand at meticulous and highly wrought watercolour panoramas of the English scene, and one of these, 'Heath Village', takes pride of place in this exhibition. Featuring such typical country activities as thatching a haystack and shoeing a horse, this crowded but perfectly organised image includes old and new side-by-side wheelwright with tractor. Humming with activity and a little too close to a toy-town layout for my taste, this remarkable picture encapsulates a vision of the countryside which mingles the romantic and the pragmatic in equal measure. My preference is for Badmin's pure landscapes, represented here by a marvel of late autumn tinting on the South Downs. Swathes of trees in all the contrasting colours of leaf-change hug the lower slopes of Bignor above great tracts of plough. There's a statement about Britain worth a thousand photographs.