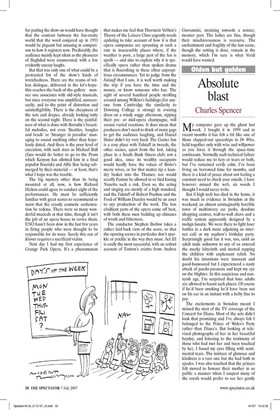 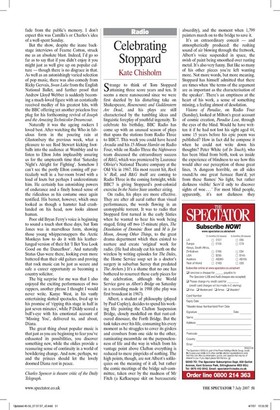 Charles Spencer My computer gave up the ghost last week. I bought it in 1999 and in recent months it has felt a bit like one of those clapped-out spaceships in Dr Who, held together only with wire and willpower as you force it through the space-time continuum. Normally such technical failure would reduce me to fury or tears or both, but I've remained eerily calm. I've been living on borrowed time for months, and there is a kind of peace about not feeling a constant need to check your emails. I have however missed the web, six words I thought I would never write.

But if high tech has died in the home, it was much in evidence in Swindon at the weekend, an almost unimaginably horrible town of multistorey car parks, desolate shopping centres, wall-to-wall chavs and a traffic system apparently designed by a malign lunatic. We were there to fight laser battles in a dark maze adjoining an internet café at my nephew's birthday party. Surprisingly good fun it was, too, until an adult male unknown to any of us entered the murky labyrinth and started zapping the children with unpleasant relish. No doubt his intentions were innocent and good-humoured but I experienced a nasty attack of paedo-paranoia and kept my eye on the blighter. In this suspicious and nannyish age, I'm surprised that lone adults are allowed to haunt such places. Of course if he'd been smoking he'd have been out on his ear in an instant with a hefty fine to pay.

The excitements in Swindon meant I missed the start of the TV coverage of the Concert for Diana. Most of the acts didn't look that promising and I've always felt I belonged to the Prince of Wales's Party rather than Diana's. But looking at televised photographs of her in her beautiful heyday, and listening to the testimony of those who had met her and been touched by her, I found my eyes filling with sentimental tears. The mixture of glamour and kindness is a rare one but she had both in spades. I was also touched that the princes felt moved to honour their mother in so public a manner when I suspect many of the royals would prefer to see her gently fade from the public's memory. I don't expect this was Camilla's or Charles's idea of a well-spent Sunday.

But the show, despite the inane backstage interviews of Fearne Cotton, struck me as an absolute blast. Indeed, I'd go so far as to say that if you didn't enjoy it you might just as well give up on popular culture — though there is no disgrace in that. As well as an astonishingly varied selection of pop music, there was also comedy from Ricky Gervais, Swan Lake from the English National Ballet, and further proof that Andrew Lloyd Webber is suddenly becoming a much-loved figure with an ecstatically received medley of his greatest hits, with the BBC offering yet another priceless free plug for his forthcoming revival of Joseph and the Amazing Technicolor Dreamcoat.

Naturally it was the ageing rockers I loved best. After watching the Who in fabulous form in the pouring rain at Glastonbury the previous week, what a pleasure to see Rod Stewart kicking footballs into the audience at Wembley and to listen to Elton John implausibly assuring us for the umpteenth time that 'Saturday Night's Alright for Fighting'. Somehow I can't see the portly Elton coming off particularly well in a bar-room brawl with a load of louts but perhaps I underestimate him He certainly has astonishing powers of endurance and a finely honed sense of the ridiculous as his costume once again testified. His barnet, however, which once looked as though a hamster had crashlanded on his head, now looks almost human.

Poor old Bryan Ferry's voice is beginning to sound a touch shot these days, but Tom Jones was in marvellous form, showing those young whippersnappers the Arctic Monkeys how to do it with his leatherlunged version of their hit 'I Bet You Look Good on the Dancefloor'. And naturally Status Quo were there, looking even more battered than their old guitars and proving that rock music can be just as secure and safe a career opportunity as becoming a country solicitor.

The big surprise for me was that I also enjoyed the exciting performances of two rappers, another phrase I thought I would never write. Kanye West, in his vastly entertaining slatted spectacles, lived up to his promise of 'ripping this stage in half in just seven minutes', while P Diddy scored a bull's-eye with his emotional account of 'Missing You', delivered to, and about, Diana.

The great thing about popular music is that just as you are beginning to fear you've exhausted its possibilities, you discover something new, while the oldies provide a reassuring sense of continuity in a world of bewildering change. And now, perhaps, we and the princes should let the lovely doomed Diana rest in peace.