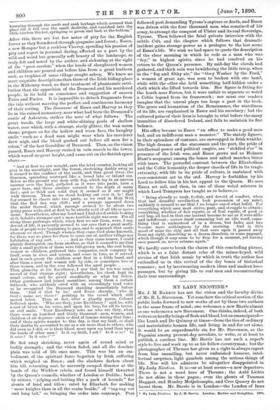 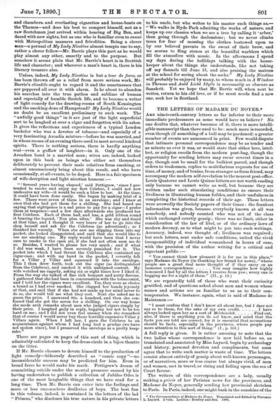 MR. J. M. BARRIE has not the vision and the faculty divine of Mr. R. L. Stevenson. Yet somehow the critical section of the public looks forward to new works of art by these two authors in the same frame of mind; one welcomes a new Barrie almost as one welcomes a, new Stevenson. One thinks, indeed, of both writers as hardly beings of flesh and blood, but as emancipated— like Lamb and De Quincey at times—from the ties of ordinary and materialistic human life, and living in and for art alone. It would be an unpardonable sin for Mr. Stevenson, as the Pa„aanini among present-day novelists, to write, or at least to publish, a careless line. Mr. Barrie has not such a superb style to live and work up to as his fellow-countryman ; but the photographer of Thrums has given us a right to always expect from him unsmiling, but never unfinished humour, intel- lectual surprises, light gambols among the serious things of life. Nor will his admirers be altogether disappointed in My Lady Nicotine. It is—or at least seems—a new departure. There is not a word here of Thrums ; the Auld Lichts do not shine in these pages ; even the ghosts of Tammas Haggart, and Hendry McQuhumpha, and Cree Queery do not haunt them. Mr. Barrie is in London—the London of Inns • My Lady Nicotine. By J. M. Barrie. London: Hodder and Stoughton. 1890.

and chambers, and everlasting cigarettes and house-boats on the Thames—and does his best to comport himself, not aS a

raw Scotchman just arrived within hearing of Big Ben, and dazed with new sights, but as one who is familiar even to ennui with Metropolitan manners and frivolities. Being a clever inan—a perusal of My Lady Nicotine almost tempts one to say,

rather a clever fellow—Mr. Barrie plays this part as he would play almost any other, smartly and to the purpose. But somehow it seems plain that Mr. Barrie's heart is in Scottish life and character; and wherever a man's heart is, there is his literary treasure also.

Unless, indeed, My Lady Nicotine is but a tour de force, or has been thrown off as a relief from more serious work, Mr. Barrie's clientele ought to regard it and the smartnesses that

are peppered all over it with alarm. Is he about to abandon his searches into the true pathos and sublime of human

and especially of humble Scotch life, and to become a writer of light comedy for the drawing-rooms of South Kensington and the smoking-dens of Hampstead? My Lady Nicotine would no doubt be an excellent preliminary to such work. The "awfully good things" in it are just of the light superficial

sort to be laughed at over a cigar and forgotten with its ashes. It gives the reflections and experiences of a typical London bachelor who was a devotee of tobacco—and especially of a very fascinating Arcadia mixture—before he was married, and in whose rooms of an evening there used to meet several kindred spirits. There is nothing serious, there is hardly anything real—even a guffaw of laughter—in it. Only one of the Arcadian band is a married man; wives are, indeed, looked upon in this book as beings who either set themselves deliberately to prevent their male relatives from smoking, or almost unconsciously bring about this result, and who have occasionally, at all events, to be duped. Here is a fair specimen of wife-deception and light nicotian humour :—

" Several years having elapsed,' said Pettigrew, 'since I pre- tended to smoke and enjoy my first Celebro, I could not now undeceive my wife—it would be such a blow to her. At the time, it could have been done easily. She began by making trial of a few. There were seven of them in an envelope ; and I knew at once that she had got them for a shilling. She had heard me saying that eightpence is a sad price to pay for a cigar—I prefer them at tenpence—and a few days afterwards she produced her first Celebros. Each of them had, and has, a gold ribbon round it bearing the legend, 'Non plus ultra.' She was shy and timid at that time, and I thought it very brave of her to go into the shop herself and ask for the Celebros (as advertised) ; so I thanked her warmly. When she saw me slipping them into my pocket, she looked disappointed, and said that she would like to see me smoking one. My reply would have been that I never care to smoke in the open air, if she had not often seen me do so. Besides I wanted to please her very much ; and if what I did was weak. I have been severely punished for it. The pocket into which I had thrust the Celebros also contained my cigar-case; and with my hand in the pocket, I covertly felt for a Villar y Villar and squeezed it into the envelope. This I then drew forth, took out the cigar (as distinguished from the Celebros), and smoked it with unfeigned content. My wife watched me eagerly, asking six or eight times how I liked it. From the way she talked of fine rich bouquet and nutty flavour, 1 gathered that she had been in conversation with the tobacconist, and I told her the cigars were excellent. Yes, they were as choice a brand as I had ever smoked. She clapped her hands joyously at that, and said that if she had not made up her mind never to do so, she would tell me what they cost. Next she asked me to guess the price. I answered 80s. a hundred, and then she con- fessed that she got the seven for a shilling. On our way home she made arch remarks about men who judged cigars simply by their price. I laughed gaily in reply, begging her not to be too hard on me; and I did not even feel uneasy when she remarked that of course I would never buy those horridly expensive Villar y Villars again. When I left her, I gave the Celebros to an acquaintance against whom I had long had a grudge (we have not spoken since), but I preserved the envelope as a pretty keep- sake.'

There are pages on pages of this sort of thing, which is admirably calculated to keep the dress-circle in a bijou theatre on the titter.

If Mr. Barrie chooses to devote himself to the production of light comedy—hideously described as "comic copy "—no inconsiderable success may be predicted for him. Even in broad farce he would make his mark. Pettigrew's dream of committing suicide under the mental pressure caused by his having undertaken to publish a collection of Jubilee Odes is one of the most laughable things that we have read for a long time. Then Mr. Barrie can enter into the feelings and more or less unconscious drolleries of boys. The best fun in this volume, indeed, is contained in the letters of the lad "Primus," who discloses his true nature in his private letters

to his uncle, but who writes to his master such things as,— " We walks in Hyde Park admiring the works of nature, and keeps up our classics when we see a tree by calling it arbor,' then going through the declensions ; but we never climbs trees for fear of messing the clothes bestowed upon us by our beloved parents in the sweat of their brow, and we scorns to fling stones at the beautiful warblers which fill the atmosfere with music. In the afternoons I spend my days during the holidays talking with the house- keeper about the things she understands, like not taking off my flannels till June 15, and also praising the matron at the school for seeing about the socks." My Lady Nicotine will probably be enjoyed by many, to whom much in A Window in Thrums and Auld Licht Idylls is necessarily as obscure as Sanskrit. Yet we hope that Mr. Barrie will, when next he writes, return to his old love, or if he must needs find a new one, seek her in Scotland.