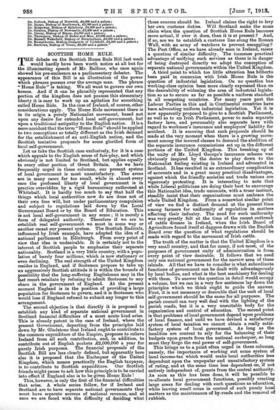 debate on the Scottish Home Rule Bill last week 11would hardly have been worth notice at all but for the illuminating speech of Mr. Balfour, who once again showed his pre-eminence as a parliamentary debater. The appearance of this Bill is an illustration of the power which phrases possess over the average man. The phrase "Home Rule" is taking. We all want to govern our own homes. And if it can be plausibly represented that any portion of the kingdom does not possess this elementary liberty it is easy to work up an agitation for something called Home Rule. In the case of Ireland, of course, other considerations apply. The Home Rule movement there is in its origin a purely Nationalist movement, based not upon any desire for extended local self-government, but upon a traditional antipathy to the English nation. It is a mere accident that the term "Home Rule" should be applied to two conceptions so totally different as the Irish demand for the establishment of an anti-English nation, and the Scottish tentative proposals for some glorified form of local self-government.

Let us take the Scottish case exclusively, for it is a case which appeals to the English sense of fair-play, and which obviously is not limited to Scotland, but applies equally to every other portion of Great Britain. As we have frequently urged in these columns, our present system of local government is most unsatisfactory. The areas are in many cases far too small, while in almost every case the professed liberty of local government is in practice overridden by a rigid bureaucracy enthroned at Whitehall. It is hardly too much to say that half the things which local authorities now do are done not of their own free will, but under parliamentary compulsion and subject to regulations laid down by the Local Government Board or by the Board of Education. This is not local self-government in any sense ; it is merely a form of delegated authority. Therefore if we are to establish real self-government we must in some way or another recast our present system. The Scottish Radicals, influenced by Irish example, have adopted the idea of a national parliament in Edinburgh. From every point of view that idea is undesirable. It is certainly not to the interest of Scottish people to emphasize their separate nationality. Scotland is a very little country, with a popu- lation of barely four millions, which is now stationary or even declining. The real strength of the United Kingdom resides in England, and if Scotsmen propose to take up an aggressively Scottish attitude it is within the bounds of possibility that the long-suffering Englishman may in the last resort retaliate by refusing to admit Scotsmen to any share in the government of England. At the present moment England is in the position of providing a large population for Scotsmen to govern, and it is Scotsmen who would lose if England refused to submit any longer to this arrangement.

The second objection is that directly it is proposed to establish any kind of separate national government in Scotland financial difficulties of a most acute kind arise. This is already patent in the case of Ireland, where the present Government, departing from the principles laid down by Mr. Gladstone that Ireland ought to contribute to the common expenditure of the Empire, proposes to relieve Ireland from all such contribution, and, in addition, to contribute out of English pockets £2,000,000 a year for purely Irish purposes. The financial proposals of the Scottish Bill are less clearly defined, but apparently here also it is proposed that the Exchequer of the United Kingdom, which means practically the English taxpayer, is to contribute to Scottish expenditure. Our Scottish friends might pause to ask how this principle is to be carried into effect if England also is to be given Home Rule !

This, however, is only the first of the financial difficulties that arise. A whole series follow, for if Ireland and Scotland are to have separate national governments they • must have separate sources of national revenue, and at once we are faced with the difficulty of deciding what those sources should be. Ireland claims the right to levy her own customs duties. Will Scotland make the same claim when the question of Scottish Home Rule becomes more actual, if ever it does, than it is at present ? And, if so, are we to establish a customs line along the Roman Wall, with an army of watchers to prevent smuggling ? The Post Office, as we have already seen in Ireland, raises a question of similar difficulty. The immense practical advantage of unifying such services as these is in danger of being destroyed directly we adopt the conception of separate national governments within the United Kingdom. A third point to which too little attention has hitherto been paid in connexion with Irish Home Rule is the question of industrial legislation. On no question has working-class opinion been more clearly expressed than on the desirability of widening the area of industrial legisla- tion so as to secure as far as possible a uniform standard in all competing countries. For many years past the Labour Parties in this and in Continental countries have been advocating uniform industrial legislation. Yet it is now apparently proposed to give to a Scottish Parliament, as well as to an Irish Parliament, power to make separate factory laws, and presumably also separate laws with regard to workmen's insurance and employers' liability for accident. It is amusing that such proposals should be made at the very moment when there is a growing move- ment among the insured classes to demand the abolition of the separate insurance commissions set up in the different portions of the United Kingdom. This breaking up of the unity of Mr. Lloyd George's insurance scheme was obviously inspired by the desire to play down to the Nationalist feeling existing in Ireland and advocated in Scotland. It has resulted in an extraordinary complication of accounts and in a great many practical disadvantages, against which the friendly societies and trade unions are vigorously protesting. It is interesting to note that while Liberal politicians are doing their best to encourage this Nationalist idea, trade unionists, with a truer instinct, steadily insist that their organizations must embrace the whole United Kingdom. From a somewhat similar point of view we find a distinct demand at the present time among farmers for uniformity of regulation in matters affecting their industry. The need for such uniformity was very greatly felt at the time of the recent outbreak of cattle disease in Ireland, when the Irish Board of Agriculture found itself at daggers drawn with the English Board over the question of what regulations should be made with regard to the movement of Irish cattle.

The truth of the matter is that the United Kingdom is a very small country, and that for many, if not most, of the purposes of government unity of administration is from every point of view desirable. It follows that we need. only one national government for the narrow area of these islands. All that we have to consider is what subordinate functions of government can be dealt with advantageously by local bodies, and what is the best machinery for dealing with them. To answer the question in detail would occupy a volume, but we can in a very few sentences lay down the principles which we think ought to guide the answer. First, it is not necessary or desirable that the unit of local self-government should be the same for all purposes. The parish council can very well deal with the lighting of the parish roads, but it is a very unsuitable body for the organization and control of education. The second point is that problems of local government depend upon problems of local finance, and until we have devised a satisfactory system of local taxation we cannot obtain a really satis- factory system of local government. As long as the localities are content to rely for the balancing of their budgets upon grants from the national exchequer, so long must they forgo the real power of self-government. This brings us to a point often urged in these columns, namely, the importance of working out some system of local income-tax which would make local authorities less dependent upon the unpopular and unsatisfactory system of rating, and at the same time less dependent on, if not entirely independent of, grants from the central authority. As soon as this has been done, it will be possible to re-allocate local government functions, possibly creating large areas for dealing with such questions as education, while leaving small areas in control of such purely local matters as the maintenance of by-roads and the removal of rubbish,