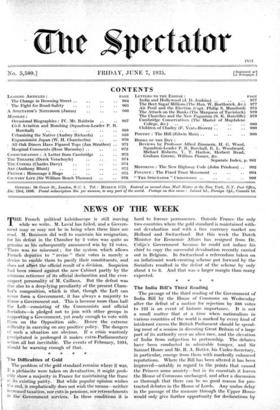 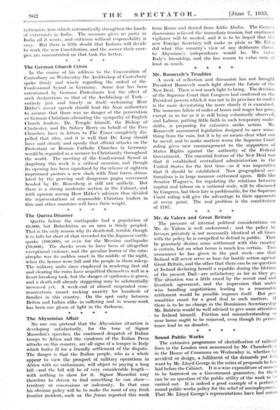 The India Bill's Third Reading The passage of the third

reading of the Government of India Bill by the House of Commons on Wednesday after the defeat of a motion for rejection by 886 Votes to 122 is an event of historic importance. It is not a small matter that at a time when nationalism in various countries of the world is marked by every kind of intolerant excess the British Parliament should be spend- ing Most of a session in divesting Great Britain of a large part of its authority over an alien race, and the elevation of India from subjection to partnership. The debates have been conducted in admirable temper, and Sir Samuel Hoare and Mr. R. A. Butler, his Under-Secretary, in particular, emerge from them with markedly enhanced reputations. Where the Bill has been altered it has been improved—notably in regard to the points That caused the Princes some anxiety—but in its essentials it leaves the House of Commons unchanged, and after a discussion so thorough that there can be no good reason for pro- tracted debates in the House of Lords. Any undue delay in the passage of the measure through the Upper House would only give further opportunity for declarations by extremists here which automatically strengthen the hands of extremists in India. The measure gives no party in India all it wants, and criticism without responsibility is easy. But there is little doubt that Indians will decide to work the new Constitution, and the sooner their ener- gies are concentrated on that task the better.