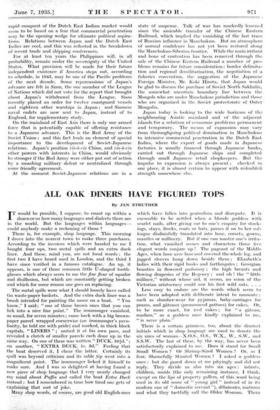 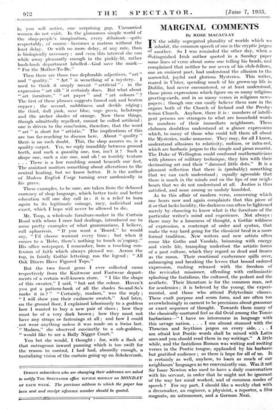 ALL OAK DINERS HAVE FIGURED TOPS

IT would be possible, I suppose, to count up within a • dozen or so how many languages and dialects there are in the world. But the languages within languages— could anybody make a reckoning of those ?

There is, for example, shop language. This morning I drove into the nearest town to make three purchases. According to the invoices which were handed to me I bought four ups, two metal spills and an extra duck liner. And these, mind you, are not local words : the first two I have heard used in London, and the third I have since verified in a famous catalogue.- An up, it appears, is one of those common little U-shaped tooth- glasses which always seem to me the fine fieur of squalor and disillusion, but which are constantly. getting broken and which for some reason one goes pn replacing. .

The Metal spills were what I should loosely have called tin waste-paper baskets. And the extra duck liner was a brush intended for painting the name on a boat. "You know," I said ; "one of those brown ones that you can lick into a nice fine point." The ironmonger vanished, as usual, for seven minutes; came back with a big brown- paper parcel wrapped cornerwise (an ironmonger's pecu- liarity, he told _me with pride) and marked, in thick block capitals, " LINERS " ; untied it at his own pace, and reirealed a clutch of smaller parcels each done up in the sanie way. On one of these was written "DUCK, 101d." ; on another, "EXTRA DUCK, is. 3d..,"• Feeling that the boat deserved it, I chose the latter. Certainly its quill was beyond critieism and' its sable tip went into a magnificent point. The ironmonger licked it himself to make sure. And I was so delighted at haying found a new piece of shop language that I very nearly changed thy mind about Puffin and called the boat Extra Duck instead : but I remembered in time how tired one gets of explaining that sort of joke. .many shop Words, of course, are good Old English ones which have fallen into genteelism and disrepute. It is excusable to be nettled when a blonde goddess with scarlet nails, after giving ear to one's enquiry for stock- ings, stays, frocks, coats or hats, passes it on to her col- league disdainfully translated into hose, corsets, gowns, mantles or millinery. But if one can master one's irrita- tion, what vanished scenes and characters those five elegant words conjure up ! The pageant of the Middle Ages, when-hose were hose and covered the whole leg, and jagged sleeves hung down beside then'; Elizabeth's ladies with their rigid busks and farthingales ; Georgian beauties in flowered paduasoy ; the high breasts and flowing draperies of the Regency ; and oh ! the "little milliner," without whose aid, it seems, no scion of the Victorian aristocracy could sow his first wild oats. . . .

Less easy to endure are the words which seem to have been adopted with deliberate intent to nauseate : such as slumber-wear for pyjamas, baby-carriages for prams, and gateaux (pronounced gattoes) for cakes. Or, to be more exact, for iced cakes ; for "a gateau, madam," as a goddess once kindly explained to me, "is never plain."

There is a certain grimness, too, about the discreet initials which in shop language are used to denote the six sizes of woman—X.O.S., 0.S., W.X., -W., S.W., and S.S.W. The last of these, by the way, has never been satisfactorily explained to me. Does it stand for Small Small Women ? Or Shrimp-Sized Women ? Or, as I fear, Shamefully Stunted Women ? I asked a goddess once : but she gazed down at me pityingly and did not reply. They divide us also into six ages : infants, children, maids (the only remaining instance, I think, except on the lips of property gaffers, of this word being used in its old sense of "young girl" instead of in its modern one of "domestic servant "), débutantes, matrons and what they tactfully call the Older Woman. There is, you will notice, one surprising gap. Unmarried women do not exist. In the glamorous simple world of the shop-people's imagination, every debutante—quite respectably, of course—becomes a matron without the least delay. Or with no more delay, at any rate, than is biologically necessary : and even this interval she can while away pleasantly enough in the pinkly-lit, rather hush-hush department labelled—God save the mark- " For the Mother-To-Be."

Then there are those two deplorable adjectives, "art" and "quality." " Art " is something of a mystery. I used to think it simply meant " artificial " : in the expression "art silk" it certainly does. But what about "art furniture," "art paper" and "art colours " ? The first of these phrases suggests fumed oak and beaten copper ; the second, nubbliness and deckle edging ; the third, dull pink, saxe blue, sage green, heliotrope and the archer shades of orange. Now these things, though admittedly repellent, cannot be called artificial : one is driven to the cono'usion, therefore, that the word " art " is short for "artistic." The implications of this arc too far-reaching to discuss here. About " quality " there is no such doubt. This, the shop assures us, is a quality carpet. Yes, we reply inaudibly between ground teeth, and such a quantity one, too, isn't it ? Such a shape one, such a size one, and oh ! so terribly texture . . . There is a low rumbling sound beneath our feet. The assistant mutters something about alterations to the central heating, but we know better. It is the author of Modern English Usage turning over sardonically in his grave.

These examples, to be sure, are taken from the debased currency of shop language, which better taste and better education will one day call in : it is a relief to turn again to its legitimate coinage, racy, individual and exact, which I hope will never be allowed to die.

Mr. Toop, a wholesale furniture-maker in the Curtain Road with whom I once had dealings, introduced me to some pretty examples of what grammarians, I believe, call aphaeresis. "If you want a 'Board," he would say, "I'd choose wawnut every time : but when it comes to a 'Robe, there's nothing to touch m'yogany." His office notepaper, I remember, bore a touching con- fession of faith which always pleased me. Across the top, in faintly Gothic lettering, ran the legend : "All Oak Diners Have Figured Tops."

But the two finest gems I ever collected came respectively from the Knitwear and Footwear depart- ments of a certain well-known store. "I like the shape of this sweater," I said, "but not the colour. Haven't you got a pattern-book of all the shades So-and-So's make it in?" "Certainly, madam," was the reply ; "I will show you their cashmere swatch." And later, on the ground floor, I explained laboriously to a goddess how I wanted to buy a new pair of shoes ; how they must be of a very dark brown ; how they must not have any straps or fastenings at all ; and how I could not wear anything unless it was made on a Swiss last t` Madam," she observed succinctly to a sub-goddess, "would like to see a Bally Nigger Court."

You bet she would, I thought : for, with a flash of that outrageous inward punning which is too swift for the reason to control, I had had, absurdly enough, a tantalizing vision of the curtain going up on Scheherezade.