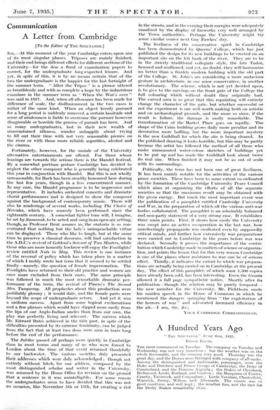 [To the Editor of THE SPECTATOR.] SIR,—At this moment of the year Cambridge enters upon one of its most singular phases. Triposes are mainly finished, and their end brings different effects for different sections of the University—for the don a flood of examination papers to correct, for the undergraduate long-expected leisure. And yet, in spite of this, it is by no means certain that of the two the undergraduate is the happier for the last fortnight of the summer term. "After the Tripos " is a phrase uttered as breathlessly and with as complete a hope by the industrious examinee in the summer term as When the War's over" was said in 1917. And, when all allowance has been made for difference of scale, the disillusionment in the two cases is rather of the same kind. When an object keenly pursued for a long period is suddenly removed, a certain lassitude and sense of aimlessness is liable to overcome the pursuer however disagreeable or horrible the process of pursuit has been. And so many undergraduates, lost in their new wealth of unaccustomed idleness, wander unhappily about trying to fill out their time with not very seasonable picnics on the river or with those more reliable soporifics, alcohol and the cinema.

Fortunately, however, for the morale of the University alternative entertainments are offered. For those whose leanings are towards the serious there is the Handel festival. By a somewhat partisan gesture Cambridge has decided to neglect the other composer who is generally being celebrated this year in conjunction with Handel. But this is not wholly unreasonable, for Bach has been steadily honoured here during the last few years, though in a less concentrated manner. In any case, the Handel programme is to be impressive and representative. It includes orchestral concerts and dramatic choral performances and is designed to show the composer against the background of contemporary music. There will also be renderings of several works, including The Choice of Hercules, which have scarcely been performed since the eighteenth century. A somewhat lighter tone will, I imagine, be set by Susannah, to be acted and sung in an open-air setting, though, as Professor Dent assures us, the oratorio is so con- centrated that nothing but the lady's unimpeachable virtue can be displayed. Those who like to laugh, but at the same time to preserve a classical decorum, will find satisfaction in the A.D.C.'s revival of Goldoni's Servant of Two Masters, while those who are more honestly lowbrow will enjoy the Footlights' review entitled Nuts in May. This review is one instance of the reversal of policy which has taken place in a matter of which I rashly wrote last term that it seemed to be settled finally—namely, the question of female impersonation. The Footlights have returned to their old practice and women are once more excluded from their caste. The same principle was followed in much the most remarkable dramatic per- formance of the term, the revival of Pinero's The Second Mrs. Tanqueray. All prophecies about this production were justifiably gloomy ; it would date, and the female parts were beyond the scope of undergraduate actors. And yet it was a uniform success. Apart from some topical exclamations and a few phrases which would have slipped more easily from the lips of our Anglo-Indian uncles than from our own, the play was perfectly living and relevant. The success which Mr. Edward Bates achieved in the title part, in spite of the difficulties presented by its extreme femininity, can be judged from the fact that at least two dons were seen in tears long before the end. of the performance.

The Jubilee passed off perhaps more quietly in Cambridge

than in most towns and many of us who were forced to•London about the time of that event returned thankfully to our backwater. The various societies duly presented their addresses which,were duly acknowledged ; though not entirely without hitch, for one address, composed by the most distinguished scholar and writer in the University, was returned by the Home Office for revision on the ground that a sentence in it was unintelligible. For some reason the undergraduates seem to have decided that this was not an occasion, like November 5th or 11th, for creating a riot

in the streets, and in the evening their energies were adequately canalized by the display of fireworks very well arranged by the Town authorities. Perhaps the University might try some similar course next Guy Fawkes' day.

The liveliness of the conservative spirit in Cambridge has been demonstrated by Queens' College, which has just published the design for its new buildings to be erected on an important site on the left bank of the river. They are to be in the strictly traditional collegiate style, the late Tudor, beamed and mullioned, and yet, no doubt, they will harmonize no better than a frankly modern building with the old part of the College. St. John's are considering a more audacious gesture in architecture, in one sense conservative, in another revolutionary. The scheme, which is not yet decided upon, is to give to the carvings on the front gate of the College the full colouring which without doubt they originally had. The carved area is so great that this repainting will entirely change the character of the gate, but whether successful or not the experiment is one well worth making both on artistic and on archaeological grounds, and the more so since, if the result is failure, the damage is easily remediable. The transformation of the Market Place goes on rapidly. The shape of the Caius building grows daily more peculiar and its decoration more baffling, but the more important mystery is the new Guildhall for which the site is being cleared. In the published drawing it looks horrible, but this may be partly because the artist has followed the method of all those who make unmeasured water-colour sketches of buildings yet to be put up and has made the Guildhall look about twice its real size. When finished it may not be so out of scale with its surroundings.

Politically, the term has not been one of great liveliness. It has been mainly notable for the activities of the various peace societies. These have been to some extent co-ordinated by the formation of the Cambridge University Peace Council which aims at organizing the efforts of all the separate societies so that the maximum result may be obtained with the given energy. But much the most important event was the publication of a pamphlet entitled Cambridge University and War, in the preparation of which all the various anti-war bodies collaborated. The pamphlet is an admirably balanced, and non-party statement of a very strong case. It establishes three main points. First, it shows how easily the University was swept into an active co-operation in the last war, how unrellectingly propaganda was swallowed even by supposedly critical minds, and further how extensively war preparations were carried out in Cambridge in the years before war was declared. Secondly it proves the importance of the contri- bution which Cambridge made in matters of science or organiza- tion, and points the lesson that for this very reason Cambridge is one of the places where resistance to war can be of serious effect. Thirdly, it indicates the extent to which war prepara- tions are actually being carried on in Cambridge at the present day. The effect of this pamphlet, of which some 1,500 copies have already been sold, has been interesting. Even the Granta allowed it a full page sympathetic notice. Shortly after its publication—though the relation may be purely temporal— the new member for the Cniversity, Mr. Pickthorn made his maiden speech in the House of Commons in which he mentioned the dangers springing from "the exploitation of the horrors of war" and advocated increased efficiency in the air.—I am, Sir, &c.,